In Germany, European Metropolitan Regions (EMR) were first defined in 1995 by the Ministerial Conference for Spatial Planning . The term should not be confused with the term Europaregion (Euregio) , which is used to designate regions that are on the territory of at least two countries. A Euregio is rarely referred to as a metropolitan region .

In contrast to an agglomeration , which consists of a core city and its suburban, rather densely built-up suburb area (also called conurbation or bacon belt ), the term metropolitan region is broader and also includes large rural areas that connect with the regional centers economic ties or commuter flows are closely related. The cooperation in metropolitan regions is also intended to improve the planning of urban development and transport projects.

Large cities that take on similar functions to the metropolises for their surrounding areas, but are smaller than metropolises with around 100,000 to 300,000 inhabitants, are referred to as regiopolises . Similarly, their interdependence is called the regiopole region .

Functions of a metropolitan region

The functionalities of a metropolitan region can be assessed using four criteria that are relatively easy to determine:

Decision-making and control function
There is a high concentration of political and economic institutions in a metropolitan region. The largest companies in a country or in the world have their headquarters or important branches there. This can be, for example, government offices, company offices, international organizations or non-governmental organizations .

Innovation and competition function
A metropolitan region is the engine of social, cultural and technological development. This is also characterized by a large number of research and scientific institutions. Large cultural events can also be organized, as the necessary infrastructure , such as B. theaters or stadiums are available.

Gateway function
A metropolitan region is a "hub". Exchange of knowledge and information is possible without any major problems, as it is very easy to reach. Indicators for this are international airports, transport hubs, the position of Internet servers, trade fairs, etc.

Symbol function
They combine "a high degree of historical, political, cultural and urban development importance and a corresponding international reputation"

Metropolitan areas in the world

See also : List of the largest metropolitan areas in the world

The largest metropolitan regions in Europe

Delimitation by the Ministerial Conference on Spatial Planning 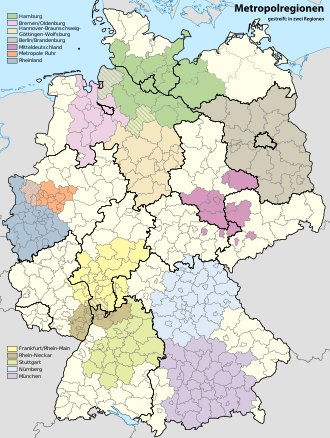 In Germany , the Ministerial Conference for Spatial Planning (MKRO) underlined the importance of the metropolitan regions in Germany ("European metropolitan regions") with its resolution on the spatial planning policy framework of action in 1995: "As engines of social, economic, social and cultural development, they should improve performance and competitiveness Preserve Germany and Europe and contribute to accelerating the European integration process ”.

The MKRO initially defined six European metropolitan regions (EMR) for Germany in 1995, another EMR was added in 1997 and another four EMRs in 2005, so that there are currently eleven EMRs in Germany. These were not determined and delimited according to spatial structural realities, but normatively, whereby the generosity of the delimitation in particular shows considerable methodological differences. The population figures are therefore only comparable to a very limited extent. Some EMRs, such as Hanover-Braunschweig-Göttingen , contain very large rural areas and core cities that are far apart, while others are much more tightly tailored. Many of the regions have cross-border links or are being developed in the same way as the future metropolitan region of Szczecin .

Since the designation of the “smaller” EMR in 2005, every German city with over 400,000 inhabitants has been the core city of a “metropolitan region” ( Dresden has now left the metropolitan region of Central Germany again). As a result, the term has moved significantly away from its original meaning (see article Metropolis ).

In addition to the strongly global metropolitan regions, there are 41 conurbations around smaller core cities in Germany . Among these, the 25 regiopolises identified in a 2008 study by the University of Kassel occupy a special position as development engines for their regions.

The federal government relies on the model of decentralized concentration in the interdependence of the metropolitan regions .

When comparing the metropolitan regions, it should be noted that the demarcation of a metropolitan region often corresponds to the different views of the individual associations, so that a meaningful comparison of the key figures according to inhabitants and area as well as economic strength can only take place to a limited extent. The delimitation can be independent of any membership of the cities and districts. In February 2017, the former Rhine-Ruhr region dissolved with the establishment of the Rhineland metropolitan region.

With around 545,000 inhabitants, Dresden is the largest city in Germany that does not belong to any metropolitan region.

The information on the number of inhabitants comes from the Report Regional Monitoring 2012 , which the Initiative Group European Metropolitan Regions in Germany (IKM) publishes together with the Federal Office for Building and Regional Planning (BBR). The delimitations used for this are based on district boundaries, so the specified population figures do not partly correspond to the actual population. The delimitations correspond to the status reported on July 1, 2012 and are subject to arbitrary changes, so that the area and population figures may no longer correspond to the current status.

Delimitation by the statistical office of the European Union

The Statistical Office of the European Union ( Eurostat ) in unity with the OECD defines metro (politan) regions in a different way: these are functional urban areas with more than 250,000 inhabitants.

The statistical spatial categories of agglomeration and metropolitan areas are used, among other things, to compare economic strength spatially and are not necessarily identical to political territory. The definition is intended as a dynamic spatial concept and is revised every ten years in accordance with the results of the federal census. The last update dates from the year 2000. The delimitation of agglomerations and metropolitan areas by the Federal Statistical Office has no legally binding force.

Since the FSO's definition of urban areas, agglomerations and metropolitan areas is applied across borders, only the metropolitan areas of Zurich and Bern are completely on Swiss soil. Around 70% of the Swiss live in one of these five areas. Until 2004 the FSO defined five metropolitan areas. However, this division into five is statistically too small for comparisons within a European framework.

The metropolitan area of ​​Zurich extends from Zug to Schaffhausen and from Frauenfeld to Baden . As a financial and trading center, media center, location for education and research and as a transport hub, it is the most important center in Switzerland. Events such as the Street Parade , the international athletics meeting and cultural institutions such as the opera house and the theater have an international appeal. In addition, Zurich Airport contributes to the intercontinental accessibility of the area. In July 2009, politicians and business representatives founded a private association under the name that aims to strengthen the economic interests of the Zurich metropolitan area.

The transnational metropolitan region of Basel is a trinational living and economic area. The research and economic area of ​​life sciences (with international headquarters for the pharmaceutical and chemical industry), banks ( Bank for International Settlements ), transport and logistics (inland port in Switzerland), trade fairs (Basel World, Art Basel) and culture (3-divisional Theater, Beyeler Museum ), are particularly well represented in the area, also known as metrobasel . With the Basel-Mulhouse airport, the region also has an airport that has grown significantly in recent years.

There are other terms for the urban area of ​​Basel, namely RegioTriRhena , Trinationaler Eurodistrict Basel (TEB) and Trinational Agglomeration Basel (TAB) . The RegioTriRhena, which is composed similarly to “metrobasel”, but extends further north (Germany and France), has 2.3 million inhabitants.

Geneva-Lausanne is an important financial center. With Geneva-Cointrin , the French-speaking metropolitan area has an international airport and is the headquarters of numerous international organizations. In July 2009, gave Bern and Romandy (French-speaking Switzerland) announced its intention to want in future to appear in public together as a utility room.

Metropolitan regions - division into five according to BFS

The largest metropolitan regions in North and South America

The largest metropolitan areas in Asia

The largest metropolitan areas in Africa

The term metropolitan region is originally an informal term description for closely interwoven regions with an urban character. This emerged from the increasing importance of areas that function as an economic, social and cultural unit beyond their spatial proximity and whose development processes are increasingly running in sync. The perception of these areas has international appeal and strengthens the formation and interpretation of terms in the feedback effect.

Even much smaller German metropolitan areas are now trying to qualify as a European metropolitan region within the meaning of the MKRO (Ministerial Conference for Spatial Planning). In the course of profiling as a metropolitan region, there are certainly friction losses. In naturally grown metropolitan regions like Berlin, the synchronicity of political events simply follows the actual synchronicity in the economic and cultural life of the region. Where politics precedes life, however, there conflicting interests are not necessarily smoothed out by social life, but have to be negotiated with difficulty at the table.

Counter-concept to the metropolitan region

The Bloomington School or Indiana School, a branch of economics and political science, arose out of a counter-movement to the Metropolitan Reform Movement of the 1970s: While the latter wanted to re-plan the administrative structures and units of metropolitan regions in a centralized manner , its representatives stood up for the maintenance of the existing, supposedly inefficient redundant structures. Vincent Ostrom, for example, carried out empirical studies to support her thesis ( The Organization of Government in Metropolitan Areas , 1961). The best-known representative of the Bloomington School is the Nobel Prize winner Elinor Ostrom .