Latium ( Italian Lazio ) is a region in central Italy with 5,865,544 inhabitants (as of December 31, 2019). The most important city in Lazio is the Italian capital Rome . The area designation existed in ancient times, but the borders of Lazio have shifted in different places over the centuries.

In ancient times, Latium was understood to mean only the roughly rectangular area between the Tiber , Sabine Mountains , Sinuessa (today's Mondragone ) and the Tyrrhenian Sea .

Today's Lazio is about halfway up the "Italian boot" on its west coast on the Tyrrhenian Sea, which is part of the Mediterranean . The northernmost city is Acquapendente , the southernmost Gaeta . In the countryside, Lazio is surrounded (in the order from north to south) by the regions of Tuscany , Umbria , Marche , Abruzzo , Molise and Campania .

Most of the rivers - the Tiber with its tributary, the Aniene , the Marta and the Garigliano with its tributaries Liri and Sacco - flow into the Tyrrhenian Sea. Only the Tronto , which rises in the Monti della Laga, flows into the Adriatic Sea .

In the 6th century BC The Latins settled in Lazio . In the Second Latin War from 340 to 338 BC BC subjugated Rome and the area became the core of the Roman Empire . After its fall , Lazio belonged to the Italian kingdom of Odoacer until 493 , and in 536 it was conquered by the Eastern Roman Empire . 755 the region was as a fief of the King of the Franks to the Pope , it became the core of the to be formed beginning Papal States . When the Franconian Empire was divided in 843 it fell to the Kingdom of Italy , but soon regained complete independence. In the course of Napoleon's Italian campaign , the Papal State was taken by French troops and Latium received a republican government based on the model of the Directory of the French Revolution . But as early as 1799, the First Napoleonic War put an end to the republic. In 1801 Pope Pius VII brought Napoleon to give in, who now restored the papal state. However, due to the Pope's refusal to participate in an alliance against Great Britain, the Papal States occupied the Papal States again in 1807/08, and in 1809 it was declared annexed by Napoleon. At the Congress of Vienna in 1815, however, it was decided to restore it. In 1860 Umbria and the Marches joined the newly formed Kingdom of Italy due to political, economic and military uncertainty . In 1870 the papal state, which was now limited to Lazio, was incorporated into the Italian nation- state. The Lazio region has been an administrative unit since 1947. 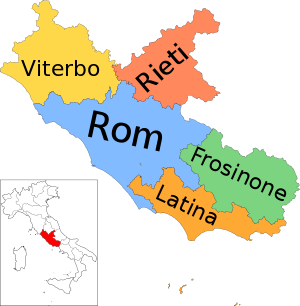 The provinces and the metropolitan city of Lazio

Lazio consists of the following four provinces and one metropolitan city :

There are the following cities and larger municipalities in the region.

Compared with the GDP of the European Union (expressed in purchasing power standards) in 2015 reached the region an index of 110 (EU-28: 100). With a value of 0.890, Lazio ranks 4th among the 21 regions and autonomous provinces of Italy in the Human Development Index .

In addition to Rome, the Alban Mountains , the volcanic lakes of different sizes, of which the Lago di Bracciano and the Lago di Bolsena in the border triangle Tuscany / Umbria / Lazio are the largest, as well as southern Lazio, here in particular the monastery, are considered to be particularly attractive for tourists Monte Cassino , which was completely destroyed in World War II, but was rebuilt afterwards.

Provinces in the Lazio region