Rieti is an Italian commune and the capital of the Rieti province in the Lazio region . It has 46,750 inhabitants (as of December 31, 2019).

The city is the seat of the Roman Catholic diocese of Rieti . 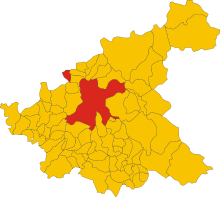 Location of Rieti in the province

Numerous districts, hamlets and individual farms belong to the community. The most important are the modern residential and industrial areas of Madonna del Cuore , Madonna del Passo , Quattro Strade and Vazia in the valley north and east of the old town. In the Sabine Mountains are the villages of Casette, Castel San Benedetto, Cerchiara, Maglianello, Poggio Fidoni, Poggio Perugino, San Giovanni Reatino and Sant'Elia. The villages of Castelfranco, Lisciano and Lugnano and the winter sports resort Pian de 'Valli in the Terminillo area are located in the Reatin Mountains .

The community is located in earthquake zone 2 (medium risk).

Name and coat of arms

The name Rieti derives from the ancient name Reate the Sabines for the city forth. The meaning of this name is unknown. According to legend, it goes back to Rhea Silvia , mother of Romulus and Remus .

The adjective to Rieti (reatino) and the name of the city's residents (Reatini) are still derived from the Latin name Reate .

The coat of arms consists of a divided shield. Above on a red background two figures in silver. A female figure with a standard and a rider. Below on a blue background a net with three silver fish. The figures are supposed to represent Rhea Silvia , legendary namesake of the city, who hands the city flag to Manius Curius Dentatus , the Roman conqueror Rietis. The fish indicate the abundance of fish in the rivers in the Rieti area. The city colors are red and blue.

Rieti goes back to the ancient Reate, the capital of the Sabines . It was conquered for the Roman Empire by Manius Curius Dentatus . Rieti has been the seat of a bishop since around 500 AD. In the Middle Ages it was a free commune before it became part of the Papal States .

At Rieti there was a battle on March 7, 1821 between an Austrian intervention army under the command of Johann Maria Frimont von Palota and 50,000 men of Neapolitan troops under General Guglielmo Pepe during the uprising of the Carbonari . The Battle of Rieti ended with the defeat of the Neapolitan army.

Simone Pietrangeli ( SEL ) was in the runoff election on 20./21. Elected Mayor in May 2012. He defeated Antonio Perelli ( PdL ) with 67.2%. Pietrangeli's center-left coalition also had a majority in the local council with 20 out of 32 seats.

On June 11, 2017, the municipal council was re-elected. The majority of the newly elected mayor Antonio Cicchetti received 50.2% of the vote, the minority around Simone Pietrangeli reached 49.8%.

The Romanesque cathedral from 1225 , the bishop's palace, which dates back to 1283, and the city fortifications from the 13th century are well worth seeing .

The chemical fiber and sugar industries are important .

An athletics Grand Prix meeting has been held in Rieti since 1971, at which the Jamaican Asafa Powell set a new world record in the 100 meter run in a time of 9.74 seconds on September 9, 2007 . The Rieti Meeting has been part of the IAAF World Challenge series since 2010 .

The American basketball player Joe Bryant played from 1984 to 1986 in Rieti (then another 5 years in Italy); his son, today's NBA star Kobe Bryant , attended elementary school in Rieti and thus laid the foundation for his fluent knowledge of Italian.

On August 29, 2010, the Kenyan David Rudisha improved his world record in Rieti with 1: 41.01 min over the 800 meter distance by eight hundredths of a second.

From July 18 to 21, 2013, the Junior European Athletics Championships took place in the Raul Guidobaldi Stadium in Rieti .

Municipalities in the province of Rieti in the Lazio region