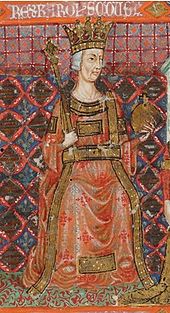 Charles II of Anjou-Naples. (Illustration from the 14th century)

He was a son of Charles I of Anjou and his first wife Beatrix of Provence († 1267). After his father had taken over the Kingdom of Sicily in 1266 , Karl received the title of " Prince of Salerno " ( Prince de Salerne ). In 1283 Karl was entrusted by his father with the reign of the kingdom and was responsible for the defense of the continental possessions around Calabria and Apulia against King Peter III. employed by Aragon , who occupied the island of Sicily after the outbreak of the Sicilian Vespers in 1282. While trying to end the sea blockade of the port of Naples by the Aragonese fleet under Ruggiero di Lauria , Charles was captured on June 5, 1284. He was first brought to Cefalù and then to Catalonia , where he was imprisoned when his father died in 1285. Count Robert II of Artois took over the reign in Naples for him .

Only after the failure of the Aragonese crusade of his cousin King Philip III. of France in 1285 and the subsequent peace initiative of the new French king Philip the Fair , Charles was released in 1288 through the mediation of King Edward I of England . In return he had undertaken to pay 30,000 marks and return to captivity if the conditions - Aragon's reconciliation with France and the Pope - were not met within three years; he also left three of his sons and sixty Provencal nobles hostage. He also had to get his nephew Karl von Valois to renounce the Kingdom of Aragon for 20,000 pounds of silver , which Pope Martin IV had granted him in the run-up to the Aragonese Crusade. In return, the Valois received a daughter of Charles with the counties of Anjou and Maine as a dowry .

Karl went to Rieti , where the new Pope Nicholas IV immediately released him from all obligations, crowned him King of Sicily in 1289 and Alfons III. excommunicated from Aragón . Charles of Valois, in an alliance with Castile, was preparing to take Aragón. Under the influence of this development, Alfonso promised to withdraw his troops from Sicily, where they had helped his brother James II to give up all rights to the island and to pay a tribute to the Pope. Alfons died childless in 1291 before the contract could be carried out. Jacob took Aragón in possession and left the government in Sicily to the third brother, Frederick II (who referred to himself as Frederick III).

Pope Boniface VIII , who was elected in Naples in 1294 under the auspices of Charles, brokered the Peace of Anagni between Jacob II of Aragon and Philip IV of France in 1295 , which also produced a highly idiosyncratic solution to the conflict over Naples-Sicily: Jacob was supposed to marry Karl's daughter Bianca and the Pope promised investiture in Corsica and Sardinia , whereas he was supposed to give Anjou a free hand in Sicily and even support him in the event of a Sicilian resistance.

An attempt was made to obtain Friedrich's approval of this arrangement through bribery. But he resisted with the support that he had in the Sicilian people and was crowned King of Sicily. Karl, who had a feeling of honor that seemed almost anachronistic, returned to the border of Aragon four months after his coronation, after his efforts to reconcile the conflicting parties had failed, in order to be taken back into captivity. Since no one there was interested in his re-capture, his honor was saved and he first went to France. There he succeeded in the peace treaty of Senlis on May 19, 1290, in which Charles of Valois renounced all claims to Aragon. Instead, the French king renounced the counties of Anjou and Maine, the ancestral lands of his house, in favor of Karl von Valois. With the consent of Pope Nicholas IV , Charles von Valois married Marguerite of Anjou-Sicily , the daughter of Charles II, on August 16, 1290.

Afterwards, Karl immediately opened a war against Frederick, but was unable to conquer the island despite the help of the Pope, Charles of Valois and Jacob of Aragón. His son Philip I of Taranto was captured at the Battle of La Falconara in 1299 . At the instigation of the Pope, Charles destroyed Lucera (near Foggia), the last center of Islam in Italy , in 1300 ; the Muslim inhabitants were massacred or enslaved. In 1302 the dispute with Friedrich was settled by the Treaty of Caltabellotta . Karl finally gave up his claims to Sicily and agreed to the marriage between his daughter Leonora and Friedrich. This sealed the division of the old Norman-Staufer kingdom of Sicily into a continental ( Mezzogiorno / Naples) and an insular (Trinacria / Sicily) kingdom, which was only to be reunited under constitutional law in 1816 with the establishment of the Kingdom of the Two Sicilies ; however, both parts were ruled by the House of Aragon from 1505 and from 1516 by the House of Habsburg .

Karl spent his last years quietly in Naples, busy with the beautification of his city. He was able to stabilize his rule over the Italian people by giving them a greater share in power than his father, and also reduced the tax burden. In the political turmoil of the Papal States and northern Italy he stayed out as far as possible and was therefore unable to prevent Philip the Fair from transferring the papacy to Avignon . In 1307 he supported the smashing of the Knights Templar , whose union with the Knights of St. John he had previously requested. He died in 1309 and was buried in San Domenico. His son later had the body - with the exception of the heart - transferred to Aix-en-Provence , where it was buried in the church of Saint-Barthélemi .

Karl was married to Mary of Hungary († 1323), a daughter of King Stephen V of Hungary and Elizabeth of Cumania , since 1270 . This marriage initiated the inheritance of the House of Anjou in Hungary , which ruled there from 1308 to 1385/86. The couple's children were: