Apulia ( italian Puglia [ puʎːa ] or often in the plural Puglie [ puʎːe ]; Latin Apulia ) is in southeast Italy Situated region with the capital Bari . It has 4,008,296 inhabitants (as of December 31, 2019). The Salento peninsula in the south of Apulia forms the "heel" of the so-called "Italian boot".

The region stretches along the Adriatic and Ionian Seas . With Punta Palascìa , the coast near Otranto reaches the easternmost point of Italy, which is only 80 km away from the Albanian coast .

The area consists of 53.3% plains, 45.3% hills and 1.5% mountains. This makes Apulia the flattest region in Italy. The landscapes are divided from north to south into the mountainous Gargano peninsula with the offshore Tremiti Islands , the flat Tavoliere delle Puglie , the subsequent Terra di Bari plain , the Murge limestone plateau , the Taranto coastal plain and the Valle d'Itria , the the southernmost region, which closes the largely flat Salento peninsula . The only mountain range over 1000 m next to the Gargano, the Monti della Daunia form the border with Campania and reach an altitude of 1152 m in Monte Cornacchia.

The main article, History of Apulia, deals with the historical development of the southeastern Italian region of Apulia, which is roughly the heel of the Italian peninsula.

Provinces and metropolitan city of Apulia

With an agglomeration of almost 600,000 inhabitants, Bari is the metropolis of Apulia and the second largest city in southern Italy after Naples . There are the following major cities in the region. (Population figures as of December 31, 2019) Source: ISTAT

In addition to almonds , olives , cereals and tomatoes , prickly pears , grapes , figs and citrus fruits also thrive in the fertile coastal plains . The mild winter is ideal for Stem carbon , which in wild broccoli recalls and the base of the famous Apulian Court Orecchiette con cima di rapa forms.

In 2013, Puglia was the first European region to be affected by olive tree death and was divided into corresponding protection zones. 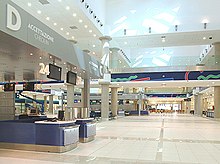 In terms of aviation history, Puglia was Italy's stepping stone to the Orient. Because of this, there is a strong concentration of civil and military airfields in this region. In addition to the Bari-Palese airport, the operating company Aeroporti di Puglia also operates the Brindisi-Casale airport and the Taranto-Grottaglie and Foggia airports . The airport of Bari, together with the airport of Brindisi-Casale, is the most important in the Apulia region;

Bari Airport is located eight kilometers northwest of Bari, the capital of the Apulia region. It was named at the end of 2005 after the real name of the late Pope John Paul II Karol Wojtyła .

The huge steel factory ILVA SpA in Taranto produces more than 30% of Italy's steel and employs 25,000 people. It is the largest of its kind in Europe. Due to massive environmental pollution with many deaths in the region, however, parts of the plant are currently closed and the Italian state has taken control of the most important employer in the region.

Provinces in the Apulia region