The almond tree ( Prunus dulcis ) is a species of the genus Prunus in the rose family (Rosaceae). Its seeds , the almonds , also called almond kernels , are used as food and cosmetics.

The botanical name Prunus comes from the Latin name for "plum", prunum , which is derived from the ancient Greek προῦμνον proumnon . The species name dulcis "sweet" refers to the sweet core - in the case of the bitter almonds var. Amara , from Latin amarus "bitter".

The German word almond is a loan word that goes back to Latin amygdala via the Italian mándorla , whose Greek origin ἀμυγδάλη amygdálē denotes the almond tree as well as its fruit. The further origin of the word is unclear. It is linguistically related to English almond , French amande , Spanish almendra and the corresponding words in other languages. 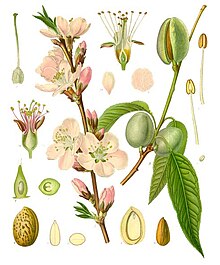 Prunus dulcis grows as a deciduous, upright, loosely leafy tree or shrub and reaches heights of (2 to) 3 to 8 (up to 11) meters. The bark is gray-brown, the trunk diameter can be up to 100 centimeters, the average life expectancy is approx. 70-80 years, but can be up to 150 years. The trunk of young trees has a pronounced ring bark, with age it becomes irregular longitudinal cracks. The bark of young twigs is bare, first green, then reddish, that of the previous year's twigs is brownish, later grayish-brown to grayish-black. The branches are erect or spread out horizontally with many short branches. The brownish, egg-shaped winter buds are 3 to 5 millimeters long and hairless.

The dark green, shiny leaves are arranged differently; on the previous year's branches they are mostly alternate, on the short shoots they are closer to each other and often concentrated in clusters. All leaves are divided into petiole and leaf blade. The mostly 1 to 2, rarely up to 3 centimeters long, hairless, ribbed petiole has two to four rounded nectar glands at its upper end . The leaf blade is simple, sometimes unequal and 3 to 8, rarely up to 12 inches long and 1 to 3 inches wide, ovate to lanceolate and pointed to briefly pointed at the upper end, also rounded. The base of the leaf blade is wedge-shaped to rounded, the leaf margin is finely notched or serrate. The leaf surface initially has light, soft hairs, later it becomes bald. The venation is pinnate, the main nerve is pronounced. The young leaves are folded in (conduplicate). 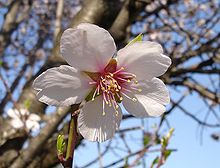 The flowers, which open before the leaves unfold, stand alone or in pairs. The flowering period often begins in January and lasts until April. The bare, very short flower stalk is initially 3 to 4 millimeters long and enlarges to 4 to 10 millimeters when the fruit is ripe.

The hermaphrodite, radially symmetrical , five-fold flowers have a double perianth and sit on a cup-shaped flower cup (hypanthium). This is bare on the outside, (rarely 5 to) 6 to 8 millimeters long and 3 to 5 millimeters thick. The five entire, green-reddish sepals are 5 to 6 millimeters long, lanceolate, pointed to blunt, glabrous on the outside and hairy on the edge. The five free, white to pink petals are divided into a blunt to edged, obverse-shaped, elliptical to rounded plate with a length of 1.2 to 2 centimeters and a width of 1.7 centimeters and a short nail . The flowers are about 3 to 5 centimeters in diameter. The many stamens sitting on the edge of the flower cup are of unequal length, the stamens are reddish to white, with yellow, dorsifix anthers. The medium-sized, uni- ovary with two ovules is dense, hairy woolly. The style is longer than the stamens, but the stigma is deeper than the anthers.

The fine gray-tomentose, velvety hairy, initially light green, later dark brown, leathery, firm stone fruits are flattened on the sides, unevenly ovoid to narrow ovoid and have a length of 3 to 5 cm and a diameter of 2 to 3.5 cm. The thin, brownish, dry, fibrous and inedible mesocarp cracks open in the middle at the abdominal seam when it is ripe. The beige, light brown stone core with a woody, thick endocarp is laterally flattened and unevenly ovoid, 2.5 to 4 cm long and approx. 2–3 cm wide and weighs 3 to 5 grams, brittle, very hard to soft. The abdominal seam is curved in the shape of a boat and more or less pointed; the back seam is only slightly curved; the surface is smooth, perforated and not very furrowed. The wrinkled seeds (the almonds) have a thin, orange-brownish seed coat (testa) and a cream-colored core (endosperm); they are laterally flattened, egg-shaped, partly pointed, about 1.8–2.5 cm long and 1.1–1.3 cm wide and 7–10 mm thick and weigh 0.8–1.4 grams; they taste sweet or bitter. The fruits ripen from July to August.

The almond tree is diploid with a chromosome number of 2n = 16.

The almond tree thrives best in a Mediterranean climate with warm, long and dry summers and mild, short and humid winters with short frosts. The optimal temperature is between 15 and 30 ° C. It tolerates short, light spring frosts, but no waterlogging . It prefers well-drained, humus and nutrient-rich, loamy, sandy, slightly calcareous soils that hold moisture well. The pH value should be in a neutral to slightly acidic range. It grows to heights of 1800 meters.

Broken and locked stone core of the almond tree

The next available epithet was introduced by Philip Miller in 1768 as Amygdalus dulcis Miller , the combination Prunus dulcis was not published until 1967 by David Allardice Webb . The name Prunus amygdalus Batsch , which is often used in older literature, has lower priority because it was first published in 1801.

The species Prunus dulcis (= cultivated almond) is divided into at least three varieties :

The almond tree is most likely from Southwest Asia; its natural locations are bushes on sunny slopes on stony soils at an altitude of 700 to 1700 m. Wildlife ranges from the Levant to North and East Anatolia , South Caucasus , North Iraq , Iran to South Turkmenistan , Kyrgyzstan and Uzbekistan . However, it is difficult to differentiate between wild and wild occurrences.

In Germany, almond trees were traditionally grown in the Vorderpfalz and the almond harvest was carried out commercially until around 1940. A distinction was made between cracked almonds with a porous, easy-to-crack shell and hard-shelled stone almonds.

In addition, the almond ripens in wine-growing areas in Central Europe : There it was probably introduced by the Romans along with wine . A German variety is the so-called Dürkheimer Krachmandel .

Around 3.2 million tons of almonds (with shell) were harvested worldwide in 2018. The ten largest producers collectively harvested 90.8% of the world's harvest. The United States of America alone reaped 58.8%.

The 2018 harvest according to Faostat, the statistics department of the World Food Organization FAO :

Structural formula of D-amygdalin, a toxic glycoside that splits off hydrogen cyanide 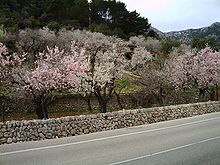 A distinction is made between the sweet almond , the noisy almond and the bitter almond . Sweet almonds have a cinnamon-brown, rough skin. Peeling off this skin is made easier by scalding the almonds with boiling water ( blanching ). Almonds are used raw , for pastries, for decorating (splinters, leaves), for filling olives and for making roasted almonds , liqueurs and marzipan . Bitter almonds are not suitable for raw consumption because they contain amygdalin , a glycoside that produces bluish acid . Cracking almonds, on the other hand, are particularly popular during the Christmas season because of their easy-to-crack shell.

The almond tree has been cultivated for around 4,000 years. Today it is mainly planted in the United States ( California ) and in the Mediterranean region , as well as in Pakistan and Iran . 100% of US production comes from California, where maintaining the almond plantations is becoming increasingly difficult due to increasing water scarcity, as up to 15,000 liters of water are required to grow one kilogram of almonds.

French cultivation is made up of the Ferragnès (around 60%) and Ferraduel (around 30% of production) varieties . Because of its flat shape, the latter is mainly used for the production of dragees . These fruits are ripe around mid-September. Among the non-European varieties, the most widely marketed almond is the non -pareil almond of California origin. When it comes to almonds from Spain , the marcona is particularly famous; all other categories are marketed under the name Valencia . Avola is particularly popular in Italy .

Among the French almonds, the almond Aï symbolizes the coronation; it grows in Provence . This ancient variety, cultivated for more than 100 years, is highly valued by pastry chefs because it is very sweet. At the moment, a single confectioner is reserving the entire production. The same applies to the Ferrastar , which is bought by just one chocolate manufacturer. The Ferragnès almond , which is also very popular and has a good, sweet taste , is easier to find on the market . It is suitable for numerous processing. The Avola almond is very popular and attracts attention for its perfumed aroma. It is mainly processed in dragées. They can be with the Marcona compare, a small Spanish almond with typical flavors that are, among others, for nougats and Turron used.

Almond milk is made from ground or crushed sweet almonds by mixing them with water and sugar. Almond cream is made only from almonds, sugar and water and can be diluted as a cold or warm drink. It is also used to make desserts, flan or ice cream. The Spanish almond cream, see picture, consists of almonds, glucose, other sugars and water. The same production process leadsto marzipan using aromas (often rose water ).

Almond butter consists exclusively of pressed almonds and contains all of the almond oil as well as all of the fiber and proteins of the almond. A meat grinder is used for cold pressing and the result is then mixed to achieve a creamier end product. There are two types of almond butter. Brown almond butter consists of roasted almonds with skin, the white one consists exclusively of blanched almond kernels. The share of bitter almonds is only 1–3%, so the taste remains rather mild and differs from the much more intense marzipan smell. In the vegan diet, almond butter is increasingly being used to replace dairy products.

The unripe, green almonds are eaten in the Mediterranean region. They are used with the skin, raw or cooked like vegetables.

Almonds contain almond oil, sugar and various vitamins , minerals and fats . The calcium , magnesium and potassium content is higher than that of nuts.

Epidemiological studies suggest that regular consumption of almonds and nuts can help reduce mortality from cardiovascular disease. For example, consuming 20 g of almonds a day can cut the risk of heart disease in half; they are also known for their cholesterol-lowering effects. A recent study also showed that regular consumption of almonds can lower blood pressure. Almonds also contain a high proportion of folic acid , which is particularly important during pregnancy; 100 g of almonds cover 6.25% of the daily folic acid requirement of a pregnant woman .