The title of this article is ambiguous. Further meanings are listed under Levante (disambiguation) . 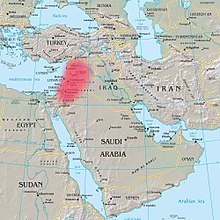 Approximate location of the Levant in the strict sense

In a broader sense, it refers to the Greek peninsula and the Greek islands in the Aegean Sea , the Mediterranean coastal areas of Turkey , Cyprus , Lebanon , Palestine , historical Syria and Egypt .

In a narrower sense, the name is limited to the east coast of the Mediterranean Sea and its hinterland, i.e. the area of ​​today's states Syria , Lebanon, Israel , Jordan as well as the Palestinian autonomous areas and the Turkish province of Hatay . This corresponds roughly to that in Arabic ash-shame (الشام / aš-Šām , "the north") called region between Euphrates and Sinai in Western Asia .

As a land connection between Africa and Eurasia , the Levant was inhabited by various prehistoric people from an early age . It is often referred to as the area of ​​origin of the Neolithic Revolution , but the term fertile crescent is more appropriate in this context , as essential steps of the Neolithic revolution also occurred in the river basins of the Euphrates and Tigris ( Mesopotamia ).

The cultural leap to the Copper Age was made early on in the Levant , mines like in Timna have been around since around 5500 BC. Proven. In ancient times, different peoples and states existed in the region, but they never found a state unity and were under the influence of neighboring empires such as Egypt and the Hittites . Political and economic importance came to the north, the Phoenicians as traders, sailors and colonizers of the Mediterranean, while in the south with the Israelites with the Judaism and in consequence of the Christianity two world religions emerged. Since the 8th century BC With a few local and / or temporal exceptions, the Levant belonged to the successive empires of the New Assyrian Empire , the New Babylonian Empire , the Persian Empire , the Alexander Empire and the Diadochian Empire of the Seleucids and finally to the Roman Empire . As part of the Eastern Roman or Byzantine Empire , the Levant was practically completely Christianized.

In the 7th century the Levant was conquered by Muslim Arabs in the course of Islamic expansion , and Damascus became the capital of the Umayyad caliphate . To this day, however, the region is characterized by strong ethnic and religious, v. a. Christian, minorities shaped like the Aramaeans . During the crusades , Christian occidental crusaders established a number of crusader states from 1098 that lasted between half a century and two centuries. In 1291, with the conquest of Accons by the Mamluks, who have now ruled Egypt, it is considered to have ended. From a European point of view, the Levant gained special importance through the intensive trade relations with Italian city-states , which were established long before the Crusades in the early Middle Ages with the Byzantine Empire and as trade routes in antiquity. The Levant was an important transshipment point for oriental goods, which were brought in via the Indian Ocean and the Asian caravan routes as part of the India trade and the Silk Road and which were exchanged for European products such as cloth . Levant trade contributed significantly to the wealth of cities such as Marseille and Livorno or city-states such as Genoa and Venice , but was made more difficult by increasing tariff demands and trade barriers by the changing Muslim rulers since the 15th century. As a result of the need to develop new sea ​​routes in the 15th and 16th centuries, the economic importance of the Levant declined sharply.

Around 1516 the Levant, like the other parts of the Egyptian Mamluk Sultanate, was conquered by the Ottoman Empire , to which it belonged for the next 400 years. After his defeat in World War I , a French protectorate in the north and a British protectorate in the south were established. During and after World War II , the new states of Lebanon (1943) as well as Syria and Jordan (both 1946) gained their independence. As a result of the increased Zionist efforts since the end of the 19th century and the experience of the Holocaust , the State of Israel was established in 1948 . The new state of Palestine in the Palestinian Territories is controversial under international law . The recent history of all of these states is still strongly influenced by the Middle East conflict .

The term, which comes from the Romance languages , generally means “east”, denoting the direction of the rising sun and the eastern part of the Mediterranean region. The designation of origin Levantino referred to someone from the Levant, the parts of the Middle East closest to Europe, including Greece and Egypt. As Levantine , was to the 19th century and who was of mixed, European and Oriental origin. Specifically, descendants of European men and oriental women who were born and raised in the Levant were referred to in this way, intellectually linked to their special socio-economic role in the trading cities of the Orient as merchants and mediators between the Orient and Europe. In the Ottoman Empire , "Levantines" were tangible as an ethno-denominational group, the term used to describe the Roman Catholic Christian population in the Ottoman dominion that was under French protection . In Italian and Sicilian , levantino or livantinu describes a “merchant nature ”, a frivolous, double- faced or shrewd person in a derogatory or disrespectful way.