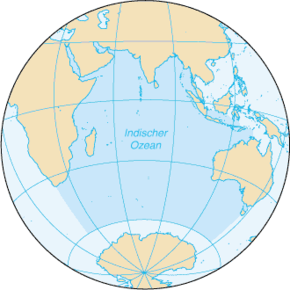 The Indian Ocean is 74.9 million sq km area (approximately 14.7% of the Earth) is the third largest ocean of the Earth and with temperatures of 22 ° C to 28 ° C, the warmest ocean in the world. It has a volume of approx. 291.9 million km³, the maximum sea ​​depth is 7,290 meters. Most of the Indian Ocean is in the southern hemisphere . It borders on the continents of Africa , Asia and Australia as well as on the Atlantic Ocean , the Pacific Ocean and along the southern 60 ° latitude on the Antarctic Ocean .

The abbreviation Indic (from Latin Oceanus Indicus ), formed analogously to the Atlantic and Pacific , is rarely used.

Within the Indian Ocean or on its sea ​​floor there are lower thresholds and a high, elongated mid-ocean ridge : the central Indian ridge , which runs roughly in the middle from north to south through the ocean.

Furthermore, there are deep-sea basins as well as deep-sea channels and various sea ​​lows in the Indian Ocean . In 2019, an expedition that wanted to reach the deepest points of all oceans with the submersible Limiting Factor examined the possible areas with a lander and a fan- assisted echo sounder from the Kongsberg group . Since then a 7,290 m deep sea ⊙ in the Sunda Trench has been assumed to be the deepest point . Previously, the Diamantina Low was partially considered to be the lowest point at over 8000 m, but the measurements identified the Dordrecht Low at only 7100 m as the deepest point of the Diamantina Fracture Zone . -11.2 118.47

The marginal seas , gulfs and straits of the Indian Ocean include (clockwise from west to north to east and south-east):

From south to north these are:

(The latter three states are indirectly connected to this ocean via the Red Sea as the marginal sea of ​​the Indian Ocean.)

Clockwise from west to north to east and southeast:

Israel and Jordan each have a small stretch of coast on the Gulf of Aqaba and are indirectly connected to the Indian Ocean via the Red Sea. They can therefore also be counted among the neighboring countries. 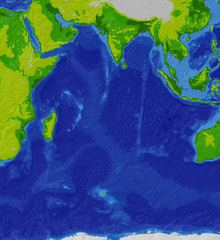 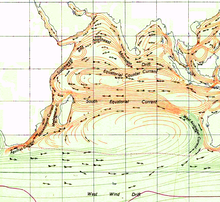 Ocean currents in the Indian Ocean

The politically independent island states Indonesia , Madagascar and Sri Lanka are located within the Indian Ocean . Independent archipelagos are the Comoros (with the French overseas department Mayotte ), the Seychelles and the Maldives . In addition to the main island, the island of Rodrigues and the two Agalega islands, the island state of Mauritius also includes other uninhabited islands such as the Cargados-Carajos Islands . The Mascarene archipelago includes most of the islands of Mauritius (not the Agalegas) as well as the French overseas department of La Réunion .

Other islands and archipelagos

The Chagos Archipelago with the main island of Diego Garcia is the last British territory in the Indian Ocean . The island of Ko Phuket is part of Thailand.

To Australia include the Christmas Island , the Cocos Islands , Heard and McDonald Islands and the Ashmore and Cartier Islands .

Other islands belonging to the Indian Ocean are the Kerguelen, part of the French Southern and Antarctic Territories, and the South African Prince Edward Islands in the far west . 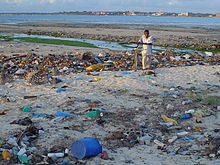 Sea ports and port cities on the Indian Ocean

Epicenter of the quake

An earthquake in the Indian Ocean on December 26, 2004 had devastating effects. It had a magnitude of 9.2 on the Richter scale . The epicenter was in the sea, near the northwest tip of Sumatra . The huge tsunami triggered by the quake caused more than 300,000 deaths. Mainly affected countries were Indonesia , Thailand , India and Sri Lanka . The waves even reached Somalia, 5200 km away .