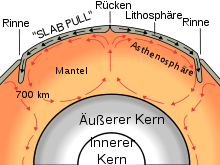 Oceanic crust is formed on a mid-ocean ridge and subducted again into the mantle at another point, thereby forming a deep sea channel at the subduction zone

Hand-drawn world map of the sea floor according to Heezen - Tharp drawn by Heinrich C. Berann (1977). The very dark / deep areas of the deep sea women are also easy to see.

Deep grooves ( engl. Trenches ) (colloquially often deep trenches ) are generally elongate, but relatively narrow recesses of the seabed . They represent the deepest sections of the earth's surface. The deepest of all deep-sea channels is the Mariana Trench in the Pacific , with a maximum depth of 11,034 m .

Deep-sea gullies are formed in the earth's crust when tectonic plates collide as a result of plate tectonic processes and one is pushed under the other ( subduction ). At such subduction zones , a plate dips downwards at an angle of up to 90 °. The deep sea channel marks the point where the two plates meet, for example a continental and an oceanic plate. The deepest points of the channel are still 3000 to 4000 m below the level of the surrounding ocean floor.

An elevation of the sea floor is called a threshold or sea ridge (deep sea ridge).

In most reference works (e.g. in lexicons and atlases ) and in the media, these deep-sea trenches , which are located within or on the edge of deep-sea basins or between deep-sea thresholds and ridges, are referred to as trenches or deep-sea trenches ; this is usually also the case in common language and expression in the geosciences . However, this is wrong from the point of view of tectonics because tectonic trenches are created by stretching, but the subduction process is characterized by convergence . Since a tectonic "trench" is always bounded by pushing faults and represents an overall stretching structure, the elongated depressions at subduction zones ( active continental margin ) must be correctly referred to as gullies (deep sea gullies), not "deep sea trenches".

In contrast to a deep sea , deep-sea channels are usually very elongated and can be viewed as the “submarine” opposite of the high mountains lying on land .

Because of the movement of the tectonic plates, submarine volcanic eruptions and seaquakes often occur , which can cause devastating tidal waves and tsunamis .

It was not until the late 1940s and early 1950s that oceanography began to develop an idea of ​​the morphology of those immense depths that are among the most spectacular phenomena on the surface of the earth . More than half of the earth's surface can be assigned to the deep sea , but for a long time eluded observation and research because of the extreme conditions that are hostile to human life.

At the end of the 19th century, with the laying of the transatlantic cables , interest in bathymetry , the measurement of submarine landscapes, increased enormously. But even after the famous Challenger expedition (1872–1876), which on February 23, 1875 explored the deepest point of the world's oceans measured at 8,164 m in the Mariana Channel , the (now outdated) term deep-sea trench was not used yet, but generally spoke of a sea ​​depression .

It was not until the 1920s that the term trench was used for geological structures. First Johnstone used in 1923 in his textbook on oceanography ( "An Introduction to Oceanography" ) the term trench (Engl. Trench ) for the elongated but narrow chutes at the bottom of the deep sea. The correct technical term for this morphological structure is deep sea channel. It is a structure that results from a compressive plate movement. A trench, on the other hand, is always an expansion structure. The term deep sea channel was introduced into the literature in 1986 by Frisch & Loeschke (1986).

Four of the deepest parts of the earth, located in deep sea, were named after the Soviet research vessel Vitjas Vitjastief . The one in the Mariana Channel was also measured in 1951 by the crew of the English survey ship HMS Challenger at a depth of 10,899 m using an echo sounder (10,863 m by wire sounder ) and was given the name Challengertief . Today most of the deep-sea women have been measured by echo sounder, some have been visited by diving boats.