This article explains the Lexicon reference work; for other meanings, see the lexicon (explanation of terms ) . 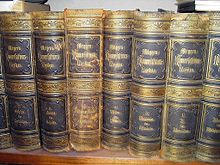 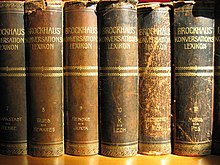 Brockhaus at the Deutsche Taschenbuchverlag 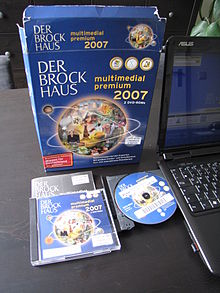 Lexicon (plural: lexica or lexicons; older spelling: lexicon , too ancient Greek λεξικόν "dictionary", λέξις for "word" as an individual component of the speech) is the general term for a reference work or dictionary in the broader sense. In addition, it was occasionally used as a synonym for a language dictionary . In modern usage today, it mostly refers to a reference work with factual information ( conversation lexicon ; real dictionary, reallexicon, non-fiction dictionary , non-fiction dictionary ), whereby a distinction is made between a lexicon in the narrower sense and an encyclopedia or a compilation of biographies ( Who's Who ).

In colloquial terms and in advertising, the use of language is vague. Sometimes a lexicographical distinction is made between dictionary (linguistic information) and lexicon (factual information). There is an overlap between the types of reference works, e.g. B. in the etymology of the keywords (as in this article).

Historically, of course, lexicons were mostly in book form. In the meantime, numerous websites see themselves as such. In particular, Wikimedia has dedicated itself to free knowledge and thus also to the creation of online lexicons, whereby Wikipedia is to be understood strictly as an encyclopedia and Wiktionary as a dictionary.

In ancient times the Greek word for dictionary is λἐξεις lexeis . It is derived from λἐξις lexis , the word. Formis first applied by Photios I († 891) to a work of the 5th century. In the handwritten tradition, the dictionaries of Photios and the Suda are also referred to with this term. In late antiquity and the Middle Ages , lexicon is used for various dictionaries in the Greek language. On the other hand, this term was not used in the Latin-speaking world either in antiquity or in the entire high and late Middle Ages .

The early medieval Greek name - similar to the name encyclopedia  - was reintroduced by the humanists in Italy at the end of the Middle Ages around 1480 and initially only applied to learned Greek works. The first naming of a German-language reference work as a lexicon was not given until 1660 by Gotthilf Treuer : Poetic Lexicon and Words-Book .

The first dictionary of the early modern period with this name is the bilingual Greek-Latin dictionary of Johannes Crastonus , which in the edition of 1483 bears the title Lexicon Graeco-latinum , whereas earlier editions are still called Dictionarium . The synonymy of lexicon and Dictionarium is also attested by the first monolingual Latin lexicon by Alberich von Rosate (* around 1290, † 1354 or 1360): Lexicon sive dictionarium utriusque iuris , Pavia 1498. Accordingly, the title of the first German-language lexicon also shows the synonymy of Lexicon and dictionary on. It is Gotthilff Treuer's… Deutscher Daedalus Begreiffendt a fully elaborated poetic lexicon and word book .. which appeared in 1660. A later example is the complete German dictionary vel Lexicon germanico-latinum by Christoph Ernst Steinbach (Breslau 1734).

The real dictionaries that have been produced in Germany since the beginning of the 18th century consistently bear the title Lexicon . With the triumphant advance of the conversation lexicon since the beginning of the 19th century, its use in the sense of a non-fiction dictionary has continued to increase. Uniform usage was not achieved until the end of the 20th century. In addition to the "conversation lexicons", "historical lexica" also became popular in the 18th century. The 14th edition of the first work of this type, Le grand Dictionaire historique ( Louis Moréri , Paris 1674), was published in 1725.

The Latinized spelling Lexicon completely predominated in the 15th and 16th centuries. The only use of lexicon in the 16th century is documented for an edition of the Greek dictionary of Hesychios of Alexandria from 1530. The first dictionary with a German language part in this spelling is the Greek-German Lexicon by Jeremias Felbinger , Leiden: Elsevier 1657. In the 18th century, the spelling Lexicon predominated in German-language works and it was not until the 19th century that the Lexicon became more and more popular. In the first half of the 20th century, lexicon occurs occasionally for German-language lexicons. Since 1950, this form can only be found in foreign-language works. 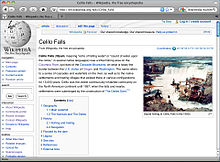 Lexicon is also a neuter in Greek . The word was Latinized by scholars, especially in the 18th century, in such a way that the Greek ending -on was preserved in the singular form of the nominative and accusative and the form lexicum therefore does not occur. The other forms were created according to the Latin o-declension . The following word forms appear in the titles and subtitles of the works:

In the 19th century, the word was adopted as a foreign word in German. It is inflected in the singular only in the genitive (“des Lexikons”) and remains unbowed in all other singular forms. In the plural it retains the Latinized form Lexica .

Meyers Konversations-Lexikon 4th ed., Supplementary volume 1892. Typical column set for lexicons / dictionaries and typical bold headwords at the beginning of the first line of the article or entry. For the keyword "Allwohlsbund", only "s." ("See") is used to refer to the blocked keyword "land ownership reform". There is already a multi-line entry for the keyword “Alonso Martinez”, and for “Alps” an article with a map that extends over two columns and continues to the next page.

The main content of a lexicon in book form is divided into articles or entries . In online reference works, there are separate web pages for a dictionary project instead of the entries and their order in book columns / pages and across them . In the case of a mere dictionary or if the thematic keyword is only explained "in key words", hardly in full sentences, the term "entries" is more likely, while in an encyclopedia (which dedicates several book pages to certain key words), "article" is more appropriate (cf. . Article as a journalistic form of presentation ). So get up

The Wikipedia guidelines are about what good articles look like, while internal Wiktionary pages offer help on the subject of “general information about entries”.

The topics are not found in printed encyclopedias using an alphabetical register (also called “index” on the last pages of a book volume) and page numbers, but are sorted alphabetically according to their keywords . (The way of sorting has led to the term lexicographical order in mathematics .) A keyword is chosen from its inflection variants in a certain basic form , the lemma (also citation form ), this is called lemmatization . If a vocabulary is to be developed, the lemma selection precedes (see also lexicography , see lexicology ).

The keyword is (in print) at the beginning of the entry or article in an active font , typically bold or bold, so that it "stands out" from the text of the entry or article and can be found quickly when leafing through ("looking up") the volume ( sub-volume ) becomes. This function of keywords is absent in online encyclopedias, where keywords are set like headings and the information you are looking for can only be found using search functions programmed in-house or Internet search engines , which vary greatly in efficiency.

Wikisource: Digitized lexicons on the Internet