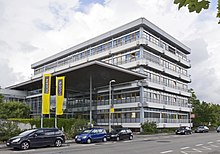 Ensemble of the Bibliographical Institute (Meyer) in Leipzig

The Bibliographisches Institut is a German publisher based in Berlin , part of the Cornelsen group of companies. He was best known through lexicons such as Meyer's Konversations-Lexikon and standard works on the German language such as the Duden . In the course of the division of Germany , two publishers of the same name operated at times.

The publishing house was founded on August 1, 1826 by the businessman, translator and publicist Joseph Meyer (1796-1856) as a publishing bookstore (as "an institute dedicated to literary purposes") in Gotha and later moved to Hildburghausen . The original purpose of the foundation was probably the establishment of a Allgemeine Bibliographische Zeitung (as a weekly directory initially of all books, music, maps and works of art published in Germany, Switzerland, England, France, the Netherlands and Italy), which (parallel to the one not by Meyer published, but not self-published correspondence sheet for merchants. Weekly report from London, Amsterdam, Hamburg, Paris, Berlin etc. on trade in goods, state paper, money and bills of exchange. ) Should appear from January 1, 1827, but not realized has been. The publishing company was actually founded on the successful implementation of Meyer's next plan, a “library of German classics” in 150 volumes. Through the publication of inexpensive classic editions from May 1827 and through new advertising and sales methods, Meyer won new groups of buyers and readers. In addition to the 52-volume Large Conversations Lexicon for the educated stands. In connection with statesmen, scholars, artists and technicians (1839-1856) and Meyers Konversationslexikon further series such as Meyer's Universum , Meyer's travel books , Meyer's atlases , Meyer's classic editions , Meyer's local and traffic lexicon , Sievers' Allgemeine Länderkunde and Brehm's animal life appeared . Under the management of his son Herrmann Julius Meyer , the company created by Joseph Meyer moved to Reudnitz (from 1889 a district of Leipzig ) in 1874 .

The " Orthographic Dictionary " published by Konrad Duden in 1880 formed the basis for uniform German spelling . In 1915 the publishing house was converted into a stock corporation. The chairman of the supervisory board was Justice Councilor Curt Hillig until 1939 . 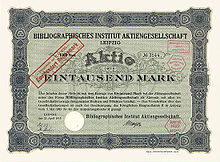 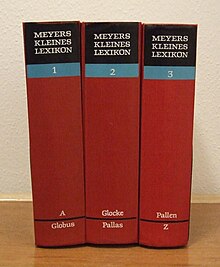 After the expropriation in 1946, the publisher was as VEB Bibliographical Institute Leipzig continued officially nationalized on July 1, 1948, into a state-owned enterprise converted, the production area was spun off. Travel literature became more and more popular among the classic business fields of the publishing house; In the 1950s the Bibliographisches Institut Leipzig developed into the most important publisher of travel guides and hiking maps in the GDR. The publication series Our small hiking booklet and The good hiking map achieved great popularity ; In addition, street maps, home and hiking books, city maps of Leipzig and a car atlas of Germany were published.

In the course of profiling the GDR publishers, the production of the hiking maps was transferred to VEB Landkartenverlag Berlin in 1960 and the publishing house for other travel literature to VEB FA Brockhaus Verlag Leipzig in 1963 . In 1964 the Enzyklopädie publishing house was organizationally affiliated with the Bibliographical Institute, but remained legally independent.

Bibliographical Institute in the Federal Republic of Germany

In 1953, the former owners decided to move the headquarters of the stock corporation to Mannheim in the Federal Republic of Germany , which was tantamount to re-establishing the company. In 1984 the two West German lexicon publishers merged: "FA Brockhaus" and "Bibliographisches Institut AG" to form the Bibliographisches Institut & FA Brockhaus AG .

Fusion and the present

After the last small shareholders had been settled, the company was converted into a limited liability company (GmbH) in 2010 . The remaining part of the company continues to this day as Bibliographisches Institut GmbH . In 2011 the publisher bundled the Duden , Meyers , Artemis & Winkler Verlag and Sauerländer brands .

The children's and youth book division was sold to S. Fischer Verlag in Frankfurt am Main at the beginning of 2013 . After the extensive relocation to the Berlin location in the spring of 2013, which involved job cuts, only the 20 jobs in the language technology division remained in Mannheim out of the original 190 jobs. In August 2013 it was announced that the language technology division will also be closed. The Mannheim archive with publishing products since 1848 was donated to the Mannheim University Library on May 16, 2013 .

In spring 2013, the publishing house moved from Mannheim to Berlin in the Treptow-Köpenick district , as announced by the owner Cornelsen in July 2012.