The state-owned company (official abbreviation: VEB ) was a legal form of industrial and service companies in the Soviet occupation zone and later in the GDR that existed until June 30, 1990 . The establishment of state-owned companies followed the model of the form of ownership in the Soviet Union . As a result of the expropriations and nationalizations of private companies carried out under Soviet occupation after the end of the Second World War , a suitable form had to be found. From 1948 it was the basic economic units of the central administration economy . From a legal point they were in public ownership and subordinate to the East German party and state leadership. 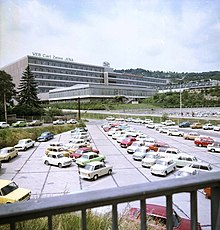 Expropriation and nationalization of industry

Of the approximately 4,000 industrial companies expropriated by several orders from the Soviet military administration by 1948 , more than 200 large companies were transformed into 25 Soviet joint-stock companies as part of the reparations policy and returned to the GDR as state-owned companies by 1953. In the course of the second wave of socialization in 1972, almost all industrial and construction companies that were still private and semi-public were converted into around 11,000 VEB, so that the share of state-owned companies in the industrial sector rose to over 99 percent. In the GDR, unlike in the other socialist countries, until 1972 there were private medium-sized businesses, mostly long-term family businesses. Before this last wave of socialization in 1972 there were over 10,000 small and medium-sized enterprises with up to 100 employees, in 1987 only 2,000. The trade in technical goods was the responsibility of seven state-owned companies.

The widespread short form VEB was derisively "interpreted" as "father's former company", especially after 1972 for the newly nationalized companies.

A part of the state-owned enterprises was subordinated to the German Economic Commission (DWK) from July 1948 . All other VEB were administered by the state governments, lower regional authorities or cooperatively. At the head of each VEB was a plant manager with individual responsibility (later also called plant or operations director). He was supported by the secretary of the SED company party organization (BPO) and the chairman of the company union management (BGL). Several specialist directors (technical director, production director, economic director, chief accountant) were subordinate to the plant manager. With "VEB (B)", district-managed, with "VEB (G)" community-managed, with "VEB (K)" district-managed, with "VEB (Ö)", locally-managed with "VEB (St)", and with "VEB ( Z) “means centrally managed VEB.

As an intermediate instance, the DWK created a Ministry of Industry and the Associations of Publicly Owned Enterprises (VVB), with the VEB as dependent enterprises. The VVB had their own financial resources in the form of so-called "funds". In financial terms, these functioned between the companies, to which they co-financed projects of economic importance, and the state budget, to which the profit shares were paid. Investments were financed from 1948 to 1967 within the state banking system through branches of the Deutsche Investitionsbank . State-owned companies played an important role as sponsoring companies in promoting culture and sport .

From the end of the 1960s, such VVB were gradually converted into combines . VVB and Kombinate, in turn, were subordinate to the responsibility and planning of the State Planning Commission (SPK), the ministries of industry and their main administrations. In 1989, 79.9% of all employees in the GDR worked in a VEB. An honorary name was often added to the actual company name , such as "Walter Ulbricht" Leuna at VEB Kombinat Chemische Werke . This additional name was previously owned by the working people within the Socialist competition of the plan fulfillment "fought" and -übererfüllung. Names of honor were rarely given that were not derived from a person, as in the VEB Großdrehmaschinenbau “8. May “Karl-Marx-Stadt .

After the reunification and peaceful revolution in the GDR , the successor companies of the VEB mainly had to struggle with economic problems. With German reunification and the introduction of the market economy from 1990 onwards, the approximately 8,000 combines and state-owned enterprises were privatized by the Treuhandanstalt . For this purpose, the state-owned companies were converted into companies with limited liability under construction (GmbH i. A.) in accordance with the Trust Act on July 1, 1990 . An internal database of the pension insurance providers provides information on the successor companies.