This article describes the philologist. For his grandson of the same name, the lawyer, see Konrad Duden (lawyer) . 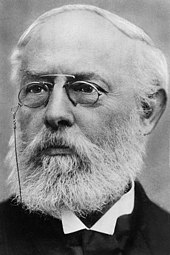 Konrad Alexander Friedrich Duden (born January 3, 1829 in Lackhausen , a current district of Wesel ; † August 1, 1911 in Sonnenberg ) was a Prussian- German high school teacher and emerged as a philologist and lexicographer . Konrad Duden created the eponymous spelling dictionary of the German language , the Duden , and thus influenced the late 19th century significantly the development of consistent spelling in German speaking countries.

Konrad Duden was the second son of the landowner ( Gut Bossigt ), brandy distiller and railway official Johann Konrad Duden (1802–1885) and his wife Juliane Charlotte born. Monjé (1810–1883) was born. Duden was baptized on January 21, 1829 in the Protestant Mathenakirche in Wesel and spent the first years of his life in Lackhausen, his birthplace. In 1833 his family moved with him to the old town of Wesel. After graduating from the United Higher Citizens 'School and Scholars' School in Wesel in 1846 , Konrad Duden studied four semesters of history, German and classical philology at the Rheinische Friedrich-Wilhelms-Universität Bonn . There he joined the student union Bonner Wingolf .

After the first four semesters , he broke off his studies - presumably for financial reasons - and in 1848 took a position as tutor in Frankfurt am Main to finance his living. For several years, from 1848 to 1854, he worked as a tutor for the family of Senator Eduard Franz Souchay . Extensive study trips to the United Kingdom and French-speaking Switzerland also took place during this period .

Six years later, in 1854, he took the state examination at the University of Bonn with special permission, which had freed him from further studies due to his private tutoring, and acquired the qualification to teach Latin, Greek, French and German. In the same year Konrad Duden received his doctorate in absentia at the Philosophical Faculty of the University of Marburg with the dissertation De Sophoclis Antigona . He broke off his traineeship at the Archigymnasium in Soest in 1854 and accepted a position as private tutor in Genoa, Italy ; from there he had already carried out his doctoral procedure in Marburg. Returned to Germany in 1859, he worked as a teacher and as director ( prorector ) at the Soester Archigymnasium.

In 1861 Duden married Adeline Jakob (1841-1924) in Messina , whom he had met there in 1854 as the daughter of the German consul . This marriage resulted in six children who survived infancy, including the eminent chemist Paul Duden . His grandchildren include the Mannheim business lawyer and law teacher Konrad Duden (1907–1979) and Lilo Milchsack (1905–1992), one of the founders of the German-British Society .

In 1869 he was appointed grammar school director to Schleiz (Principality of Reuss Younger Line ), where he worked out the rules for the later dictionary , because Franconian , Thuringian and Saxon dialects came together in Schleiz and the assessment of the spelling of a student depended on the language tradition in which the respective language tradition Teacher grew up. By his standard work Duden had particularly educated layers of the reading and writing is intended to help.

From 1876 to 1905 he was director of the Royal High School in Hersfeld . Here he published his most important work, Complete Orthographic Dictionary of the German Language , in 1880 . In 1905 he retired and took up his retirement home in Sonnenberg near Wiesbaden (Prussian province of Hessen-Nassau ). He died there in 1911 and was buried in the family grave in Bad Hersfeld at his own request.

Duden campaigned for the standardization of German spelling all his life . In 1871 he first published spelling rules with brief explanations under the title On German Spelling in the annual reports of Schleizer Gymnasium . He followed the phonetic principle "write as you speak". This typeface, intended for use in his grammar school, was soon well known in specialist circles and was published in the following year by the BG Teubner publishing house in Leipzig with the title The German Spelling ; a dictionary was already included with the work. This later so-called "Schleizer Duden" had a significant influence on the spelling debate in Germany and became the template for the following orthographic dictionaries.

Duden was also invited to the first conference in 1876 to “achieve greater unification in German spelling”, but this failed due to the objection of Reich Chancellor Otto von Bismarck .

The work Complete Orthographic Dictionary of the German Language , published on July 7, 1880 by Verlag Bibliographisches Institut , is considered the "Urduden" and contains 27,000 headwords on 187 pages. Bismarck issued a decree prohibiting the use of the orthography taught in Prussian schools in administration. It was not until 1901 that representatives of the German federal states and Austria-Hungary decided at a conference in Berlin that a uniform German spelling should be based on Duden's dictionary. In 1902, the German Bundesrat decided on Dudens rules for German spelling and vocabulary to be binding for all federal states of the German Empire ; Austria-Hungary and Switzerland followed suit. Accordingly, “Schlag im Duden nach!” Became a popular phrase when there were uncertainties in German spelling. The Duden in its currently 27th edition (2017) contains around 145,000 keywords.