The Prussian province of Hessen-Nassau emerged in 1868 from the states of Kurhessen and Nassau annexed by Prussia in 1866 , the former Hessen-Homburg and the Biedenkopf ( Hessian hinterland ) and Vöhl districts of the Grand Duchy of Hesse, the Free City of Frankfurt and the Bavarian districts of Gersfeld and Orb . It comprised the northern and central part of today's State of Hesse , in which Upper Hesse, a province of the Grand Duchy of Hesse (Hesse-Darmstadt), was embedded as an enclave . Furthermore, parts of what is now Rhineland-Palatinate , Lower Saxony and Thuringia belonged to Hessen-Nassau . The province existed until 1944. The largest cities were Frankfurt am Main , the provincial capital Kassel and Wiesbaden .

Establishment of the Province

After the German War in 1866, the Electorate of Hesse (residential city of Cassel), the Duchy of Nassau (residential city of Wiesbaden), the Free City of Frankfurt and the Bavarian offices of Gersfeld and Orb came under Prussian rule. Furthermore, the Grand Duchy of Hesse had to cede the Biedenkopf district , the so-called Hessian hinterland , the Vöhl district and the recently acquired Landgraviate Hessen-Homburg to Prussia through the peace treaty of September 3, 1866 with Prussia ; However, it received the previously Kurhessische Bad Nauheim .

The new Prussian areas were initially united in the administrative districts of Kassel and Wiesbaden under a provisional Prussian high presidium in Kassel. On December 7, 1868, the new Prussian province of Hessen-Nassau emerged from this . As usual in Prussia, it was divided into circles; only where a city was excluded from the district because of its size (at least 25,000 souls / inhabitant), there was an urban district and a rural district .

The coat of arms is divided into three parts and shows the coats of arms of the three annexed states: on the right (seen from the bearer) the crowned, silver-red cross-striped lion of the Electorate of Hesse, on the left a crowned golden lion, like the first in the blue field, for Nassau, in the red tip of the gold-armored silver eagle of the Free City of Frankfurt.

The Oberpräsident was the head of administration in a Prussian province. Like the top officials of the administrative districts, the regional presidents , they were appointed by the Prussian state government or by the king. The population of the province had no influence on the election of the senior president.

Representatives of the people

By far the largest city in the province was the former federal city of Frankfurt am Main. Although most of the other larger cities were also located in the densely populated, trade and industrial Rhine-Main area in the south of the province, Hessen-Nassau was governed from Kassel in the north of the province. The following table contains all cities in the province that had more than 10,000 inhabitants, with their population figures from 1871, 1910 and 1939:

1 Griesheim was a rural community

Administrative division of the province of Hessen-Nassau 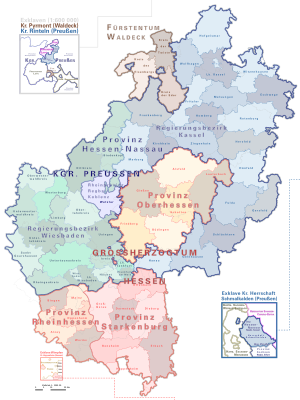 Hessen, 1900. The Hesse-Nassau administrative districts of Kassel and Wiesbaden in blue and green

The district of Frankfurt was dissolved on April 1, 1910, when all the communities in the district were incorporated into Frankfurt am Main. The city, district and administrative district of Cassel have had their names with "K" at the beginning since December 4, 1926.

On April 1, 1927, the city of Fulda became a district. On April 1, 1928, the urban districts of Wiesbaden and Frankfurt am Main expanded through incorporations, including the large cities of Höchst am Main and Biebrich . The new Main-Taunus-Kreis emerged from the remnants of the districts of Höchst am Main and Wiesbaden . Höchst, now a district of Frankfurt, remained the administrative seat of the new district until 1987. Following a referendum on April 1, 1929, the Free State of Waldeck was incorporated into the Free State of Prussia and assigned to the Kassel administrative district. At the same time the city of Marburg became a district.

On October 1, 1932, the Wetzlar district moved from the Rhine province , Koblenz district , to the Hesse-Nassau province and Wiesbaden district , while the Schaumburg district , the former Rinteln district , from the Hesse-Nassau province, Kassel district , to the province Hanover and the administrative district of Hanover was incorporated. Thus two isolated districts ( exclaves ) were incorporated into the surrounding provinces. Due to the requirements in the savings regulations of the Reich President , the districts of Biedenkopf , Gersfeld , Homberg , Kirchhain , Westerburg and Usingen were dissolved and merged with neighboring districts. The districts of Biedenkopf and Usingen were restored to a smaller extent in 1933.

The Reichsstatthalter and Gauleiter of the NSDAP, Jakob Sprenger in Darmstadt, was appointed as the Oberpräsident in Wiesbaden for the province of Nassau . The Gau Hessen-Nassau , however, still included Frankfurt, Nassau and Hessen-Darmstadt. The district of Kassel formed the Gau Kurhessen .

Gauleiter Karl Gerland in Kassel was entrusted with the deputizing for the Oberpräsident in Kassel for the province of Kurhessen .

The exclave Schmalkalden was already since 1944 by the annexation to the administrative district of Erfurt in Thuringia Reichsstatthalter Fritz Sauckel assumed and in 1945 finally part of the country Thuringia .

The Catholic student union K. D. St. V. Hasso-Nassovia Frankfurt am Main and the Corps Hasso-Nassovia are named after the province . Their student coats of arms contain the lions of Hessen-Nassaus and Kurhessen . In 1913 the aforementioned connection borrowed its color from the Kurhessian colors.

The town of Hessisch Oldendorf is located in the Hameln-Pyrmont district in Lower Saxony . The name addition, which appears anachronistic today, is explained by the fact that it belongs to the former Grafschaft Schaumburg district , which was once an exclave of the Electorate of Hesse and then, until 1932, of the Province of Hesse-Nassau.