from Wikipedia, the free encyclopedia
This is the spotted version , flagged on April 25, 2020 . There is 1 pending change that has yet to be viewed.

The district of Fulda is located in the administrative district of Kassel in East Hesse on the eastern edge of the Rhine-Main metropolitan region .

The core area of ​​the district of Fulda includes the so-called Fulda basin . To the east of it lies the low mountain range of the Hohe Rhön with Hesse's highest mountain, the Wasserkuppe . In the west of the district there are still foothills of the Vogelsberg . The name of the district is derived from the river Fulda and the district town of Fulda .

The Fulda district was created in 1821 after the Grand Duchy of Fulda came to the Electorate of Hesse in 1816 and was divided into four districts. In 1856, the Rödergrund community moved from the Hünfeld district to the Fulda district and became part of the Rödergrund-Egelmes community . When the Electorate of Hesse and the Bavarian districts of Gersfeld and Orb were annexed by Prussia in 1866 , this area became the new administrative district of Kassel in the Prussian province of Hesse-Nassau . Today's district area was divided into the districts of Fulda, Gersfeld and Hünfeld .

On July 1, 1974, the city of Fulda lost its status as an independent city and was incorporated into the Fulda district, which means that it has reached its current size with a total of 23 communities.

District administrators of the Fulda district from 1821 to 1972

Since 1 February 2006, Bernd Woide (CDU) district administrator of the district of Fulda. His last re-election took place on September 24, 2017 with a share of the vote of 65.0 percent and a voter turnout of 71.6 percent.

The district of Fulda has a coat of arms, a flag and a banner .

See also : List of coats of arms in the district of Fulda

In 1962 the sponsorship for the expelled Sudeten Germans from the Friedland district was taken over. 1965 also for those from the Leitmeritz district .

In the Future Atlas 2016 , the Fulda district was ranked 89th out of 402 districts, municipal associations and independent cities in Germany, making it one of the places with "high future prospects". In the 2019 edition, it was ranked 114th out of 401.

The Fulda station is an important railway junction and stop on the Hanover-Würzburg high-speed railway . The railway lines Fulda – Frankfurt , Fulda – Bebra , Fulda – Gersfeld and Fulda – Gießen run through the district . The federal motorway 7 (Kassel – Würzburg) and federal motorway 66 (Frankfurt – Fulda) open up the district in long-distance road traffic. The federal highways B 27 , B 84 , B 254 , B 279 and B 458 are part of the network of federal roads , state roads and district roads .

The Weimarer Straße tunnel in Fulda is part of the Fulda city ring road and the Neuhof motorway tunnel on federal motorway 66 also runs through the district and is of supraregional importance.

Local public transport is provided by trains and buses. The district of Fulda is in the tariff area of ​​the Rhein-Main-Verkehrsverbund . 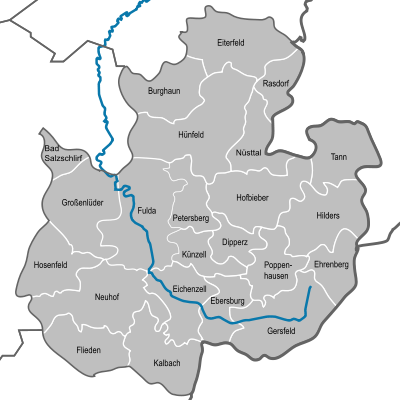 The following list contains all former municipalities that ever belonged to the district of Fulda.

On July 1, 1956, the district was assigned the distinctive sign FD when the vehicle registration number that is still valid today was introduced . It is still issued today.

Municipalities in the district of Fulda