This article describes the federal highway 27 in Germany. For the street of the same name in Austria see Höllental Straße .

The federal road 27 (abbreviation: B 27 ) leads from Blankenburg in the Harz Mountains via Göttingen , Fulda , Würzburg , Tauberbischofsheim , Mosbach , Heilbronn , Stuttgart , Tübingen , Balingen and Villingen-Schwenningen to the Swiss border near Lottstetten . The B 27 is between Bad Dürrheim (confluence with the B 33) and the Donaueschingen triangle ( A 864 ) a section of the European route 531 Offenburg - Bad Dürrheim .

The total length of the B 27 is 673 km, of which 362 km on the first section between Blankenburg and Würzburg, 303 km on the second part between Tauberbischofsheim and the Swiss border near Neuhaus am Randen and 8 km on the last section in the so-called Jestetter Zipfel between Altenburg and Lottstetten are omitted. The part of the B 27 between Würzburg and Tauberbischofsheim that has been replaced by the federal motorway 81 is 21 km. All distances are approximate.

The Federal Highway 27 goes back to the 1932 introduced highway 27 , in the Nazi era in national route 27 renamed back. These linked sections with completely different origins. 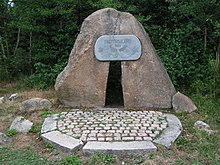 Between Elend and Braunlage , the B 27 was interrupted by the inner-German border until 1989. After the opening of the border, there was a checkpoint on the B 27, the crossing was initially only open to pedestrians. In the meantime, the Bremke, the former border, has been overcome by a concrete bridge and the B 27 has been opened to road traffic. The border monument Elend reminds of the border .

In the 1970s, the B 243 was relocated in the southern Harz region. In the course of this, the B 27 between Bad Lauterberg and Herzberg was built similar to a motorway. Up until the 1960s it was planned to continue the B 27 to Göttingen in a similar way to a motorway or to replace it with the A 388 . Instead, it was partially rebuilt without crossing, but only around Ebergötzen (together with the B 446 ) was realized like a motorway. In Waake, the street was widened in the 1970s, but not moved around the town; therefore, a three-lane, motorway-like bypass was built between 2010 and 2015.

The country road between Fulda and Hammelburg was expanded into a road as the second road in his country between 1779 and 1785 by order of the Fulda prince-bishop Heinrich von Bibra . At that time it was considered sensational because of its width and was praised by many truckers as a technical masterpiece. Nevertheless, a section of this road near Motten was replaced between 1898 and 1902 by a new, winding, but low-gradient route.

In the section between Bad Brückenau (branch of the state road to Jossa) and Hammelburg, the B 27 leads through the land of the Fulda prince-bishops and is very scenic. The route is partly not yet developed, winding and hilly. The route shows the character of an old country road and cuts through large forest areas several times ( Neuwirtshauser Forst , Staatsforst Geiersnest, Büchelberg vantage point). It touches historical land and encounters Franconian wine-growing region for the first time near Hammelburg.

In the Hammelburg area - especially in the 1960s - there were large traffic jams in the urban area at the intersection with the B 287 , as the B 27 was used as an alternative route from Fulda to Würzburg (without detour via the A 5 until the A 7 was completed) / A 3 ) was used. Today, the B 27, especially between Bad Brückenau and Hammelburg, has a rather tranquil, regional volume of traffic.

Until the expansion of the Hammelburg military training area in 1937 by the German Wehrmacht , the B 27 followed through this area via Bonnland and Hundsfeld and led the Reichsstraße at the southwest end of today's military training area at Hundsbach out of this area, where it passed through Bühler not far from the village , Münster and Aschfeld near Eußenheim met the current route again. After the establishment of the military training area, the route from Hammelburg below Saaleck Castle via Obereschenbach, Sodenberg, Höllrich, Heßdorf (branch road to Gemünden am Main ) in the direction of Karlstadt was changed. The remnants of the old, former route have been expanded by the Bundeswehr since the 1960s as access to the exercise targets. Today's route is designated as an independent route between Hammelburg via the Hammelburg camp and Gauaschach to Arnstein (B 26) as a state road and the shortest connection between Hammelburg and Würzburg.

According to Bayr. Ministry of Transport based on a decision in 2013, the B 27 between the Bad Brückenau-Volkers junction of the A 7 and Hammelburg became the main road for almost 37 km due to the lack of national importance, the outdated route and the undeveloped condition as well as the almost parallel route to the A 7 downgraded to a state road. As a result, the B 27 between Fulda and Würzburg loses its former function as a historical north-south connection.

The former Baden State Road No. 4 led from Würzburg via Mosbach to Wiesenbach and there it merged into the Badische Staatsstraße No. 3 to Heidelberg .

The road from Würzburg to Tauberbischofsheim was expanded into an art road in 1755. Its further construction via Walldürn to Buchen could only take place from 1806 to 1909 under Baden suzerainty.

In Ludwigsburg, the B 27 runs through an inhabited area; due to the high traffic load, there are discussions about reducing this load, at least in the Eglosheim district . A variant provides for a parallel route with the A 81, whereby at least the B 27 should be covered, but since this suggestion creates resistance from the residents concerned, a citizens' initiative has proposed a tunnel roughly below the current route.

The route to Schömberg runs south of Stuttgart on the former Swiss road . As one of the main traffic arteries in Württemberg, this was expanded into a road as early as the 18th century . The expanded Chaussee led in 1777 from Cannstatt via Stuttgart, Tübingen, Hechingen and Balingen to Dotternhausen . From the Schömberg reached in 1784, the Swiss road led via Wellendingen , Spaichingen , Tuttlingen , Witthoh , Engen and Hilzingen to Schaffhausen . Between 1841 and 1845 the route between Dettenhausen and Lustnau was relocated: Instead of the old direct connection, a less steep route via Bebenhausen was chosen. In 1927 and 1928 the old stone road was paved, remnants of the old cobblestone pavement have been preserved as parking bays north of Bebenhausen, for example. In 1938 the Tübingen bypass was completed.

Between 1979 and 1994, the route between Stuttgart and Tübingen was changed, expanded like a motorway and released in three sections (1979 from Echterdingen to Filderstadt, 1984 from Filderstadt to Kirchentellinsfurt, 1994 from Kirchentellinsfurt to Tübingen). The route was initially planned as the A 83 in the 1970s and was also designated as such in the 1980s. Another name was "B 27 new" or "B 27 n" to differentiate the route from the old B 27 running through Schönbuch . Since the complete completion of the four-lane B 27 between Stuttgart and Tübingen , the old B 27 no longer has the status of a federal highway, but is still referred to as the "old B 27". For the section between Leinfelden-Echterdingen-Nord and Aich, the planning contract for the six-lane expansion was tendered across Europe at the beginning of 2018.

After the introduction of the truck toll on January 1, 2005, as on many other federal highways, heavy goods traffic rose sharply. Since the route from Göttingen to Würzburg runs parallel to federal motorway 7 and the B 27 has long been considered an alternative route, the traffic load on this section has increased significantly. Due to the EU limit values ​​for noise pollution being exceeded, the Hessian Ministry of Transport closed the route from the Friedland (A 38) junction to the Fulda-Nord (A 7) junction to through traffic for lorries all day in August 2005 , so that it was necessary to avoid the A 7 on the B 27 is no longer allowed.

On November 4, 2006, a 3.7-kilometer-long section of the expansion between Tübingen and Dusslingen was approved; in July 2014, approval followed up to the Nehren substation, including a 500-meter-long tunnel through Dußlingen. The further expansion in the region ( Schindhautunnel , bypass of Ofterdingen and Bad Sebastiansweiler ) is currently uncertain due to financing and planning difficulties.

Since 2008, the bypasses in Hauneck have been implemented between the Bad Hersfeld junction (A4) and Hauneck-Sieglos. The approximately 6 km long route is the last section of the reconstruction of the old B 27 between the Fulda-Nord junction (A 7) and the A 4 through the Haunetal , which has been carried out since the late 1970s, and completion is planned for 2017.

A speed limit of 120 km / h has been in effect on the entire Stuttgart – Tübingen section since 2013, and since April 2015 also on the motorway-like section between Bodelshausen and Balingen. On the section between Degerloch and Aichtal , variable message signs had been in operation since mid-1995 .

The federal highways 27 and 243 at the exit Herzberg in the direction of Braunlage (27) and Nordhausen (243). The truck toll sign has just been installed at the beginning of the motorway-like road.

Since 2015, a truck toll has been levied on the section designated as a motor road from AS Barbis to the entrance to Herzberg . This happened in the course of the truck toll on the B 243 . After the Bad Lauterberg-West junction, the toll continues on the B 243.

The Würzburg / Kist - Gerchsheim - Tauberbischofsheim section has been replaced by the A 81 . This resulted in the graduation to state road St 578 (Bavaria) or state road L 578 (Baden-Württemberg).

The section between Bargen and Neuhausen am Rheinfall runs on Swiss territory and is Autostrasse 4 or Hauptstrasse 4 in the Swiss road network and therefore does not belong to the B 27.

In January 2016, the sections from the Fulda-Süd junction of the A 66 to the Bad Brückenau-Volkers motorway junction and between the junctions of the B 286 and B 287 to the state road were downgraded, as traffic has shifted to the parallel A 7 . The route between the two downgraded sections has been designated as part of the B 286.

The B 27 is developed like a motorway on several sections :