This article describes the federal highway 186 in Germany. For the street of the same name in Austria see Ötztalstraße .

The development of the B 186 is structured as follows: 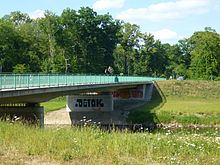 Bridge over the Neue Luppe

The number 186 was already assigned in the Third Reich, but not until the second phase of numbering, which was carried out around 1937. At that time, the route Köthen - Bitterfeld was planned for Reichsstraße 186 , which is now served by the B 183 .

Originally, Fernstraße 186 in the GDR was a ring road that was supposed to direct long-distance traffic around Leipzig and thereby connected Leipzig's neighboring cities of Schkeuditz , Taucha , Markkleeberg and Markranstädt . The sections between Schkeuditz and Taucha (north of Leipzig) and in the south (between Zwenkau and Markkleeberg) were interrupted by the open-cast lignite mining , so that there were two unconnected sections. The eastern section, from the Markkleeberg district of Wachau to federal road 6 in Borsdorf , was graduated in 2010 and added to state roads 46 and 78.

European roads do not run on the route of the B 186.