The federal highway 469 (abbreviation: B 469 ) is a German federal highway , which mostly runs through the Free State of Bavaria . The last kilometer of the northern section is in Hesse .

The federal road 469 is the traffic "main artery" of the Bavarian Untermain area and connects it with Frankfurt and the rest of the Rhine-Main conurbation by the shortest route . It crosses the “ Bayerischer Untermain ” region from north to south and has to cope with traffic loads of 15,000 at Kleinheubach to around 45,000 vehicles per day at Stockstadt am Main . It serves as a connection to the national trunk road network with the federal highways Frankfurt - Würzburg ( A 3 ) and Aschaffenburg - Gießen ( A 45 ).

Since ancient times, the main traffic routes in the region have been based on the course of the Main . The Romans built solid roads on its west bank that connected their forts along the Limes . Towards the end of the 18th century, the Electorate of Mainz built a road in the western Main Valley , which mostly ran in a straight line between Seligenstadt, Stockstadt and Obernburg.

The B 469 was built like a motorway between the Stockstadt- Mülldeponie and Trennfurt- Süd junction - partly in the form of a bypass road on new routes, partly by expanding the existing highway. The B 469 has two separate lanes, each with two lanes, has intersection-free junctions with acceleration and deceleration lanes, but with the exception of the Obernburg area, it has no hard shoulder. The dead straight, about nine kilometers long section between Obernburg -Nord and Großostheim- Mitte is popularly known as the Long Towel (sometimes the entire four-lane section of the B469 is also called the Long Towel). Originally, however, what was meant was the old route between Obernburg and Seligenstadt, which today joins north of Großostheim-Mitte as the AB 16 district road.

The two-lane sections of the B 469 to the south were rebuilt in 1994 ( Wörth bypass ) and 1995 ( Trennfurt bypass ). The single-lane expansion from Trennfurt to Amorbach took place before 1975, bypassing all of the localities.

After the clearance of the Obernburg - Wörth gap closure on August 23, 2007, a further increase in traffic is to be expected in the entire route of the B 469. On the one hand, it is investigated whether the capacity of the B 469 south of Trennfurt could be increased by adding a third lane, and there are also thinking about intersection-free junctions. On the other hand, traffic simulations in 2010 showed that the long political demand for a four-lane expansion would make the B 469 “too attractive”, especially for heavy goods vehicles on the way to Stuttgart.

The B 469 used to run through Wörth and Trennfurt , since 1994/95 these places have been bypassed in a motorway-like manner. A further expansion to the Miltenberg junction (St 2310-B 469) in the south and an extension as the B 448 to Offenbach were planned, with the road between the Tannenmühlkreisel and the junction at Offenbach / Bieber already being built. However, these plans were dropped. The expanded line should be rededicated as the A 687 . The responsible state building authority in Aschaffenburg could no longer determine why this did not happen.

End of the upgraded line at Stockstadt

Several new building projects are planned for the B 469.

Since 2016, the bridge over the route of the former Bachgaubahn has been renewed at a total cost of around € 3.6 million. It is widened and its load-bearing capacity is increased.

In the Federal Transport Infrastructure Plan 2030 passed by the Federal Cabinet on August 3, 2016 , the project numbers B469-G020-BY and B469-G010-BY-HE include a 1.2 km extension to six lanes between the A 3 and the AB 16 with a total cost of 15.9 million euros as well as a 2.4 km long extension to four lanes between the A3 and the A 45 with total costs of 11.6 million euros under urgent needs. On December 2, 2016, the Bundestag amended the Federal Highway Development Act in accordance with the Federal Transport Infrastructure Plan.

Bridge over the B 469, the Main and the DB route Aschaffenburg-Miltenberg. The B 469 gets a ramp up to the new bridge. The connection to the existing road network takes place to the west (Mil 38) and east (St2309 old) each with a roundabout. The western end of the building is directly adjacent to the existing Obernburg-Nord junction. The length of the construction project is approx. 1.9 km; the total costs are approx. 15 million euros. The measure is included in the 7th expansion plan for the state roads in Bavaria in urgency level 1R. The planning approval was approved on December 4, 2019.

Over a total length of 15.6 km, the B 469 is to be upgraded at an estimated cost of € 50 million. The project is in the preliminary investigation stage.

Preliminary investigations are in progress.

The fast lane between Trennfurt and Miltenberg

Reciprocal overtaking lanes between Trennfurt and Miltenberg should minimize the risk of accidents due to the high overtaking pressure in this area. The budget for the third lane required for this is 14 million euros.

For safety reasons, hard shoulders are to be created between Obernburg and Stockstadt. The expansion, which cost around 55 million euros, also gives the opportunity to partially withdraw the previously existing speed limit of 120 km / h.

The entire length of the B 469 between Amorbach and Mainhausen is accompanied by the Deutsche Limes-Straße . The Bocksbeutelstrasse also follows it from Miltenberg to Großostheim . Between Amorbach and Kleinheubach , the B 469 corresponds to the Nibelungenstrasse and in Obernburg the German holiday route crosses the Alps and the Baltic Sea . 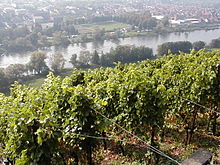 Grapevines in the Main Valley

Johannisburg Palace , Pompejanum , Park and Schönbusch Palace , the collegiate basilica of St. Peter and Alexander and the old town of Aschaffenburg, the moated castle in Mespelbrunn

The B 469 leads north from Amorbach and follows the Main valley via Wörth am Main , Obernburg am Main , Großostheim to junction 46 Mainhausen of the A 45 near Aschaffenburg . It runs through an area, the great variety of which is characterized by the wooded hills of the Odenwald (west) and the Spessart in the east and deep river and brook valleys. Towns and villages with their often historically grown townscapes and a large number of castles, churches and palaces give evidence of a cultural past of up to 2000 years along the route.