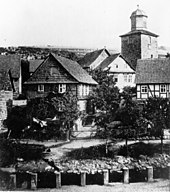 Trubenhausen location, delimitation of the L 3238 from the Gelster by means of massive, bush-hammered sandstone blocks

The land routes from Witzenhausen to Helsa and Walburg are old trade routes that allow the export of salt from Bad Sooden-Allendorf, lignite from Hohen Meißner and the Hirschberg , flax and linen from the neighboring villages, glass , alum and clay from Großalmerode and Epterode (clay town Großalmerode ) served. The intersection of both state roads was in the Trubenhausen district . At the same time, the L 3238 from Witzenhausen to Trubenhausen and the L 3239 from Trubenhausen to Helsa were part of an old military road that Kaiser Wilhelm II and his wife Auguste Viktoria used when they visited their summer residence at Schloss Wilhelmshöhe in Kassel when they came from Berlin.

The national highway 451 was established on January 1, 1961 from the previous state roads first order, L 3238 Witzenhausen - Walburg and L 3239 Allendorf - Helsa . The state of Hesse wanted to hand over the road authority to the federal government in order to relieve itself financially. Conversely, the young republic sent out appropriate signals, because it was important to show the state and to distinguish itself. So it happened that on January 1, 1961, the official birth of the federal road 451 as an important regional cross-connection between the then district town of Witzenhausen and the regional center of Kassel was upgraded to a federal road and rededicated.

Redesigned connection of Landesstraße 3238 to the B 451. Foreground: location "Rotes Gewende"

Federal funds were used to expand the B 451 from Querenberg near Großalmerode to Helsa-Wickenrode in 1967/68 . In 1977 the route from the Trubenhausen location to the south and the swivel to the west with a connection to the L 3238 (connection to the B 7 to Walburg) was fundamentally changed. The new, around 1200 m long section bypasses a hilly, drift-endangered local area “Rotes Gewende” on the valley side and significantly reduces the danger in this area. Due to the construction of the reinforced concrete bridge, Landesstraße 3238 coming from Walburg now meets the B 451 perpendicularly.

In 1978/79 the city center of Witzenhausen was transformed into a pedestrian zone. The passage through Brückenstraße – Marktplatz was omitted. At the same time, within the city of Witzenhausen, the left bank of the Werra in front of and behind the Werra bridge and the narrow Stubenstrasse were redesigned into a one-way street and henceforth set up as the B 451. At the northern entrance to the city, a generous expansion and renovation took place, with the Gelster being given a new bed.

In 1998/99, Kasseler Straße in Großalmerode was fundamentally redesigned from the market square to the western exit of the city with wider sidewalks and parking strips, and the width of the lane was visibly narrowed.

In 2004/2005 the area Erbsmühle - Querenberg was renovated and raised noticeably in the valley floor of the Black Gelster near Erbsmühle with a new reinforced concrete bridge.

Course of the road

Characteristic embedding of the B 451 in the Gelstertal

The federal road 451 begins with road kilometers 0.00 in Witzenhausen at the connection to the federal road 80. This is also the lowest point, at 134.25 m above sea level. From there it leads over the Werra bridge and formerly through the middle of the city over the Brückenstraße, Marktplatz, Walburger Straße to the south into the Gelstertal. Due to the conversion of Brückenstraße and the market square into a pedestrian zone at the end of the 1970s, the route was relocated to a length of approx. 500 m along the Werra, and then flows over Schützenstraße, Hinter den Teichhöfen, onto Walburger Straße and itself to continue as before in the Gelstertal. Parallel to the Gelster, it accompanies it in the valley floor on a moderate incline over the villages of Hundelshausen and Trubenhausen exactly 11 km in a south direction to the junction to state road 3238. Here it swings west and climbs the Querenberg with a significant gradient.

Historical photo in the area of ​​the Giesenhagen / Pfaffenberg estate

This is followed by a moderately uphill stretch to the market square of the small town of Großalmerode, then a steep stretch of around two kilometers to Pfaffenberg, where it reaches its zenith at 445.1 m above sea level. This is followed later by a downward gradient that is not entirely safe for heavy trucks into the center of Wickenrode. It continues with a moderate incline, meandering to Helsa. There, at road kilometer 21.8, the B 451 ends, secured by a set of traffic lights, at the B 7. The altitude at the end is about 263 m.

The federal highway 451 is an important regional connection between the federal highways 80 and 7 and is well developed along its entire length. It is also part of the German Fairy Tale Route and especially the Frau-Holle-Route, which leads from Kassel via the Werra-Meißner area to Höxter . 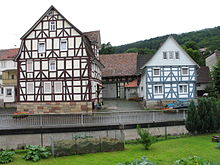 Half-timbered houses in Trubenhausen on the B 451