This article describes the Bundesstraße 20 in Germany. For the street of the same name in Austria see Mariazeller Straße .

The federal highway 20 (abbreviation: B 20 ) is a German national road . It leads from the community of Schönau am Königssee in southeast Bavaria , partially running near the Austrian border, in a northerly direction to the Czech border near Furth im Wald .

The Bavarian state roads were numbered according to their starting point:

Beginning in the extreme south-east of Germany in the Königssee district of the municipality of Schönau am Königssee , in the immediate vicinity of the lake of the same name , the B 20 initially runs for about 50 km through the Berchtesgadener Land district . After about five kilometers it reaches Berchtesgaden , from here the main road runs for a few kilometers together with the B 305 , before it branches off again to the north and via Bischofswiesen , the Hallthurm pass and, after a winding downhill section, reaches Bayerisch Gmain and then Bad Reichenhall . Shortly after the B 20 and the B 21 run together for a few kilometers, the junction with the A 8 follows in Piding , from there it leads via Ainring to Freilassing .

From here it follows the course of the Salzach to the north on the left, which forms the border with Austria here. The B 20 then runs through the towns of Laufen , Tittmoning and Burghausen until it meets the A 94 in Marktl , which currently ends here. From here, the B 20 forms the continuation of the motorway towards Passau, together with the B 12 towards Passau, which will soon be expanded to the A 94. After crossing the Inn, it leaves Upper Bavaria for the first time and now also leads, leaving the shared route with the B 12, across Lower Bavaria . Via Eggenfelden , where it runs on a section together with the B 388 and crosses the Rott , it leads through the Lower Bavarian hill country and the Vilstal to Landau an der Isar .

Shortly after crossing the Isar and shortly before the junction with the A 92 , the first section begins, in which the B 20 is designated as a motor road. To the north of the A 92 it is mainly three lanes, after about 20 kilometers it crosses the B 8 south-east of Straubing at a junction built as a clover leaf , then passes the Danube bridge Straubing and crosses the A 3 again - again in the form of a clover Kilometers the motor road ends and the B 20 leads through the Kinsach valley into the Upper Palatinate. Finally, she meets the town of Cham in the Regental , which she touches on the B 85 . From here on, the B 20 is again designated as a motor road. After the B 22 and finally the B 85 have left the B 20, it runs through the Cham-Further Senke past Weiding and Arnschwang and has bypassed the town of Furth im Wald in a wide arc since 2013 as a bypass road, including the 745 Meter-long Deschlberg tunnel . A few kilometers after Furth im Wald, the B 20 ends near the Schafberg district at the border crossing to the Czech Republic . Across the border, the Silnice I / 26 trunk road continues to Pilsen . 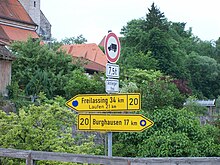 Road sign on the B 20 in Tittmoning ( Bavaria , Germany ) with reference to the "Blue Route"

As part of an alternative route of the eastern transalpine long-distance traffic with an extensive bypass of Munich on the occasion of the 1972 Summer Olympics , the signs between the motorway junctions Straubing ( A 3 ) and Piding ( A 8 ) were clearly marked south with a blue point and north with a blue ring, which the route has earned the nickname "Blue Route".

The B 20 is often used by goods traffic from Salzburg as an alternative route to the A 8 / A 9 and is therefore often overloaded by trucks. At km 122.1, 10,928 vehicles / 24 h were recorded at the counting point on the southern outskirts of Laufen in 2010, the share of freight traffic was around 11%.

At peak times, this fact leads to a maximum drivable speed of only 60 km / h, although the traffic routing of the B 20 would allow higher speeds due to the many bypasses.

A bypass of the city of Laufen, which could include a connection to the Austrian B 156 over a new Salzach bridge, is being planned. On March 19, 2011, the first construction phase of the Furth im Wald bypass with the 745 meter long Deschlberg tunnel was opened. After the opening of the second construction phase from AS Furth-Mitte to Furth-Nord on September 5, 2013, the B 20 was completely relocated to the bypass.

According to the Federal Trunk Road Toll Act (BFStrMG), there was no truck toll obligation for trucks on the B 20 for a long time . Since July 1, 2018, federal highways for trucks over 7.5 tons have generally been subject to tolls.