This article describes the Bundesstraße 61 in Germany. For the street of the same name in Austria see Günser Straße .

The federal road 61 (abbreviation: B 61 ) is a north-south connection from the Bremen area to East Westphalia .

Until December 2018, the B 61 in Bad Oeynhausen was part of Europastraße 30 , as it routed traffic from the A 30 from Osnabrück to the A 2 in Hanover. With the opening of the north bypass A 30, the E 30 was relocated and the B 61 was deprived of its status as a European road.

The road begins in Bassum and leads via Sulingen to North Rhine-Westphalia . In the border area it was relocated and rebuilt several times so that some cities and villages can be bypassed. It no longer begins in the center of Bassum as it used to be. It now branches off from the federal highway 51, which was developed as a bypass .

At the level of the Westphalian Petershagen, the state road 770 (L 770) crosses with its Weser bridge the B 61 and connects it with the federal road 482 on the east side of the Weser. This connection is important for freight traffic, as the B 482 leads directly to the A 2, while the B 61 runs 15 kilometers south of Petershagen through the middle of the city of Minden . The B 482 is therefore more suitable for long-distance traffic and is correspondingly congested in this section.

B 61 at Porta Westfalica

After Minden, after a “motorway junction”, you reach the city of Porta Westfalica with the B 65 through the Weserauentunnel, which was newly built in 2002 . From there you can change over the Weser bridge, which was renewed shortly before the tunnel was built, to the B 482, which in this area runs directly parallel to the B 61 and continues on the other bank of the Weser. This alternative route via the A 2 is mainly used by transit traffic to avoid the B 61, which after the tunnel only has two lanes with several through-passages at the foot of the Wiehengebirge to Bad Oeynhausen . There the road runs in two lanes through Dehme to Rehme and from there in four lanes to Löhne . In the local area of ​​Dehme, the B 61 is connected to the new A 30 with a feeder, which relieves the districts of Hahnenkamp and Dehme from through traffic, and ends here for the time being.

old course of the B 61 in Bad Oeynhausen

The further course through the center of Bad Oeynhausen as well as the continuation to Herford became state roads (L 777, L 546, L 860), district roads (K 16.) At the beginning of 2020 after the gap on the A 30 north of Bad Oeynhausen was closed and the B 611 was completed ) or local roads graded. The 2.8 km long section of the motorway west of Löhne- Gohfeld was rededicated as the B 611. In the 1970s, this section was part of a planned continuation of the A5 from Gießen to Bremen .

The next part of the B 61 has started at the Kirchlengern junction of the A 30 since the beginning of 2020 and runs together with the B 239 coming from Lübbecke to Herford, where it crosses with the state road 860, which was previously the section of the B 61 from Bad Oeynhausen was. In Herford , the two federal highways 61 and 239 form the northern and western city bypasses, partly in the motorway cross-section. While the B 239 was expanded in 2007 to the A 2 at the Herford / Bad Salzuflen junction with four lanes and no intersections, but without hard shoulder, the B 61 is routed normally again from the south-west of Herford, where it leaves the B 239 and continues towards Bielefeld . 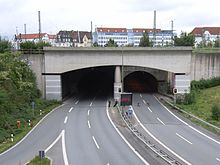 B 61 in Bielefeld (East Westphalia tunnel)

In the Herford and Bielefeld area, the changing cross-sections can be traced back to an A 47 planned in the 1960s and 1970s . Since these plans are no longer being pursued, the B 61 is to be widened in places in the long term. In the Milse district of Bielefeld, there is another bottleneck along the B 61, although it is more likely to come from Bielefeld, which the traffic planners wanted to get under control through a four-lane expansion - fought by local citizens' groups and nature conservationists. From the point where the B 61 begins to drive through Bielefeld, it has already been expanded to four lanes and has largely grown in terms of the volume of traffic. In the downtown area, approximately five kilometers, the B 61 is pivoted first provisionally on the Walther Rathenau road to 535 meters long Ostwestfalentunnel , a wholesale for the former than A 35 planned, but also controversial realignment of B 66 in the direction A 2 represents in order to then take the Ostwestfalendamm city ​​motorway over the Bielefelder Pass to the south of Bielefeld - here the B 61 is sometimes even expanded to six lanes.

In Bielefeld- Brackwede , the B 61 finally becomes the feeder to the A 33 , which connects Paderborn and Osnabrück . The plan is to continue the motorway feeder behind the motorway junction with the A 33 as a three-lane bypass for the Ummeln district of Bielefeld in order to relieve the existing B 61, which continues with two lanes from Brackwede directly through Ummeln.

After Ummeln, the main road runs past the Gütersloh districts of Isselhorst and Avenwedde -Bahnhof to Gütersloh . From the entrance to Gütersloh, the federal road becomes four-lane and serves the purpose of a city ring. Although the B 61 is not free of intersections in the city area, the traffic lights are coordinated so that you can drive through the city on a green wave at a maximum speed of 60 km / h (70 km / h are allowed in the city area) . From the industrial area south, the B 61 then leads again in two lanes over the district of Kattenstroth to Rheda-Wiedenbrück .

There it meets the B 55 , which should be a further advance payment for the A 47 . The previous last section via Oelde-Stromberg , Beckum , Hamm , Bergkamen-Overberge , Kamen and Bergkamen-Oberaden to Lünen was downgraded to state roads.

The line between Minden and Herford was built as early as 1800 as part of the Prussian trunk road from Minden to Koblenz. In 1828 the continuation of this road via Bielefeld, Gütersloh and Wiedenbrück to Lippstadt was completed, where it merged into the (later) Bundesstraße 1 . With the numbering of the road network introduced in 1932, however, the later built road via Hamm to Unna was chosen as the route of the road that was then still known as trunk road 61 (FVS 61) and from 1934 designated as Reichsstraße  61 (R 61). Until the renovation in the 1970s, the road that brought a lot of traffic from the Ruhr area to East Westphalia and back ran through the middle of the old town of Minden . Only the urban redevelopment made it possible to rearrange the traffic and allow the traffic flows to run past the city center as tangents. 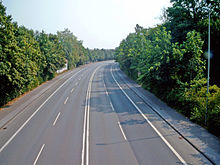 The federal road 61 in Gütersloh

The development of the B 61 is structured as follows:

In the north of Herford, the plan is to expand the line between the end of the joint route with the B 239 in the area of ​​Füllenbruchstrasse and the junction towards Kirchlengern on Goebenstrasse to four lanes. The overall length is around 1½ kilometers. The discussion meeting for the planning approval decision took place on May 8, 2015.

Between the "Dehmer Spange" in Bad Oeynhausen-Dehme and the Weserauentunnel in Porta Westfalica , a new line is to be built by 2030 in the new provisional Federal Transport Infrastructure Plan 2030 .

Mobile without a car

The Without Car event has been taking place on the B 61 between Bielefeld and Herford since 2009 . For this, Herford Strasse in Bielefeld and Bielefelder Strasse in Herford are closed to motor vehicles on the last Sunday in September every two years. From 9:30 a.m. to 6:00 p.m., only pedestrians and non-motorized vehicles are allowed to use the full width of the road. In the Bielefeld city area, the car-free section branches off from the B 61 and continues along the urban road to Ravensberger Park or Rathausplatz, in Herford Bielefelder Straße is closed until it begins at Fürstenauplatz. At several points along the 16-kilometer route, catering and information stands will be set up, there will be hands-on activities, raffles, presentations and musical entertainment. Around 50,000 participants take part in each event.