The title of this article is ambiguous. Further meanings are listed under Isselhorst (disambiguation) .

Isselhorst ? / i is a northern district ofGüterslohinOstwestfalen-Lippe, which was incorporated into today's district town of Gütersloh in 1970 as part of the municipal reorganization.

The parish of Isselhorst , as far as it is part of the city of Gütersloh, includes the neighboring towns of Ebbesloh , Hollen and Niehorst, 23.42 km² with 5,584 inhabitants. While the parish makes up 21% of the urban area of ​​Gütersloh, 6% of the total population of the city live there. The population density in the parish is 238 inhabitants / km², in the entire urban area of ​​Gütersloh 860 inhabitants / km². The village structure and the rural surroundings of Isselhorst can be recognized from these numbers.

Various rivers, of which the Lutter is the largest, drain the area following the natural gradient in a westerly direction towards the Ems . The Lutter takes on the Reiherbach near the town center , and the Krullsbach also runs through the local area.

Starting clockwise in the north, Isselhorst is bordered by the districts of Holtkamp and Ummeln of the Bielefeld district of Brackwede and the districts of Avenwedde , Nordhorn , Blankenhagen , Niehorst and Hollen in Gütersloh .

Urn graves from the Stone Age and Bronze Age , which were found on the Hollerfeld between Isselhorst and Hollen, show that the area was settled around 2000 BC. Chr.

The village of Isselhorst was first mentioned as "Gislahurst" in the oldest records of the Freckenhorst monastery . The age of the register is dated to the middle of the 11th century. Isselhorst is the oldest district of Gütersloh, d. H. also older than the city of Gütersloh itself. Based on the year 1050, the village celebrated its 950th anniversary in 2000.

Like the rest of the County of Ravensberg , Isselhorst fell to the County of Berg in 1346 ( Jülich-Berg from 1423 ). The ecclesiastical assignment of the place was not undisputed for centuries. Documents from the 15th century and the Ravensberger Urbar from 1556 prove that it belongs to the diocese of Münster . Up until the Reformation, and sometimes even beyond, the courts paid their tithes to the Marienfeld monastery or the Herzebrock monastery . Around 1600 the community in Isselhorst had adopted the Reformation Lutheran doctrine.

With the county of Jülich-Berg, the area came provisionally to Brandenburg in 1609 and finally as a result of the Thirty Years War in 1666. During the war, the Isselhorster Höfe suffered looting in 1623, 1625 and 1635. Isselhorst belonged within the county of Ravensberg to the office Sparrenberg, Vogtei Brackwede. In 1719 the County of Ravensberg was merged with the Principality of Minden zu Minden-Ravensberg , and the government was now based in Minden.

The pastors held school lessons well into the 18th century. Pastor Adolf Teichmann, who worked in Isselhorst from 1700 to 1714, was the first pastor to hand this task over to a schoolmaster. The school building on Kirchplatz was built in 1804 and housed the elementary school until 1968 (the school gymnasium built in 1929 is now the festival hall).

In 1807 Prussia had to cede all areas on the left Elbe. Isselhorst belonged to the Bielefeld district in the Brackwede canton of the Kingdom of Westphalia by (French) Royal Decree of December 24, 1807 , which existed until October 1813. After that, Prussia took the county of Ravensberg and thus Isselhorst back into its possession. Brackwede became the seat of an office in the Bielefeld district formed in 1816 .

Flags of the five formerly independent parishes of the parish Isselhorst, hoisted at the Evangelical Church

The cultivation of flax and hemp had already started in Isselhorst in the 16th century . Up until the beginning of the 19th century there was a spinning room in almost every house , in which yarn spinning and line weaving were operated. Also clog was widespread. In addition, some Isselhorsters moved to the Netherlands in the summer months to mow grass or cut peat . Others worked seasonally as miners or field fire bricks in the Ruhr area or in the Bergisches Land. It was only relatively late that industrial companies were founded in Isselhorst - with the exception of the Elmendorf grain brandy distillery, which was founded in 1689.

After the introduction of the Prussian state community order for the province of Westphalia on October 31, 1841, the status of Brackwedes was confirmed as an office. Isselhorst also became an office , but was still co-administered by the Brackwede magistrate. After just a few years, the two were merged to form the Brackwede-Isselhorst Office, which after a while was again only called Brackwede Office .

In 1892 the Isselhorst / Avenwedde train station was inaugurated, which is located in the Avenwedder area, but was funded by the parish and was therefore given the name “Isselhorst”.

In 1969, the municipal councils of Isselhorst, Ebbesloh, Hollen and Niehorst decided to join the city of Gütersloh, while Holtkamp chose Bielefeld. This assignment came into effect on January 1, 1970. Through the territorial reform of 1973 Isselhorst became part of the Gütersloh district.

The small Catholic church Maria Königin is a branch church of the "Heilige Familie" parish in Blankenhagen and was only built in 1957 after many Catholics had moved to Isselhorst as a result of the Second World War.

The election results of the last few years, based on the Gütersloh part of the parish Isselhorst (i.e. without Holtkamp):

The tower of the Protestant church in Isselhorst

In the Fire Brigade Museum Isselhorst

Listed factory owner's villa from 1886 opposite the Elmendorf distillery

In the local history museum Isselhorst

A total of 38 objects from Isselhorst are on the list of architectural monuments in Gütersloh .

In the adjoining rooms of the “Zur Linde” inn there is a fire brigade museum, which shows a private collection of badges, helmets and fire brigade equipment that has existed since 1960. In total, the collection includes tens of thousands of exhibits.

Next to the fire brigade museum is the barrel museum, which opened in 2014. It shows the "large Elmendörfer barrel", an oak barrel exhibited in 1902 at the Düsseldorf industrial and trade exhibition as the "largest grain barrel in the world". It holds 20,000 liters. There are also other exhibits from the history of the Elmendorf distillery.

It can be described as a curiosity that the Isselhorst Local History Museum, which opened in March 2006, is located in Holtkamp and thus in the Bielefeld area. The Heimatverein was unable to find suitable premises in Isselhorst itself. On a former farm, the local history museum shows everyday objects from the world of life and work around 1900, especially from the areas of housekeeping, handcraft, horticulture, beekeeping and agriculture. You can see u. a. a shoemaker's, a carpenter's and a painter's workshop, a tailor's room, exhibits on house weaving, house slaughter and a mom and pop shop .

Around 30 clubs are based in Isselhorst. The oldest institutions include the YMCA- Ortsgruppe Isselhorst, which was founded in 1882 and from which the shanty choir "Die Luttermöwen" was formed in 1992 , the trombone choir Isselhorst founded in 1886 , the gymnastics club TV Isselhorst from 1894 as well as the DRK local group and the singing club Isselhorst, both of which were founded in 1898.

Isselhorst only became a football club relatively late, with 1. FC Isselhorst founded in 1978.

The Horse Strength Club, founded in 2002, pursues an extraordinary purpose of the association, which is committed to the promotion, care and maintenance of historic tractors , Unimogs , commercial vehicles and, in general, old agricultural machinery and agricultural cultural assets. The 160-member association (as of 2013) presents its historic land vehicles and machines, e.g. B. at village festivals or once in the summer at Mühlenstroth . The PS Club owns u. a. a historically valuable Deutz MTZ 320 from around 1935.

By far the largest association is TV Isselhorst, which had around 1,100 members in 2012. It also offers citizens from the rest of the city and district of Gütersloh and even from neighboring districts a sporty home. Other clubs with more than 200 members are the 1. FC Isselhorst, the local groups of YMCA and DRK as well as the rural women’s association Isselhorst founded in 1948.

The Automobil-Club Westfalen, founded on March 3, 1902 and part of the Automobile Club of Germany , is also based here. The first president of the ACW was the Isselhorst distillery entrepreneur Friedrich Elmendorf, who at that time ran the Elmendorf distillery together with his brother.

Isselhorst has a more rural structure, in 2004 72% of the area in the parish Isselhorst was used for agriculture. However, there are also some medium-sized companies.

Isselhorst is considered to be one of the best residential areas in Gütersloh, the average income and building land prices are correspondingly higher than in most other parts of the city. In contrast to the urban area and the other Gütersloh districts, there is no multi-storey building in Isselhorst that extends over three storeys. The unemployment rate in 2008 was only around 3%, but for the non-German population it was 8% (proportion of the non-German population: 2.7%). According to the family report of the city of Gütersloh from 2008, 91% of the Isselhorsters are “not poor”; that is the highest value of all Gütersloh social rooms.

Isselhorst is a street village , i. In other words, the village did not develop in a circle around a center, but along the main street, in the case of Isselhorst the Haller street. As a result, the village has two “centers” today: the church square as the classic center of the town, where the weekly market and the village fair also take place, but which is otherwise not very busy, and the particularly busy section of Haller Straße where the shops can be found. It is possible that a third center will emerge if the former Elmendorf distillery is to be converted into a distillery courtyard with new shops (see under buildings). This redesign could just as easily connect the two “centers” and merge them into one unit. 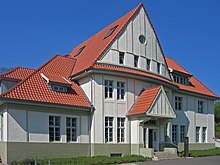 The retail offerings include a. two grocery stores ( Edeka and Aldi ), three bakery branches and a butcher shop. In addition, in the center of Isselhorst z. B. three restaurants, two hotels, two banks ( Sparkasse and Volksbank ), two pharmacies, a snack bar and two ice cream parlors. A post office is located in the Minuth stationery store (formerly Hillenkötter) after the Isselhorster post office was closed a few years ago.

Isselhorst has convenient connections to the center of the district town of Gütersloh (5–6 kilometers) and to the regional center of Bielefeld (12–15 kilometers) thanks to the B 61 that runs not far from town . The Isselhorst-Avenwedde station, inaugurated in 1892, is located on the Hamm – Minden railway line near the border with the neighboring district of Avenwedde .

Better known to many people than the town of Isselhorst is Isselhorster Versicherung VaG , founded there in 1883 , which managed around 20,000 insurance contracts in 2010. This mutual insurance association, which was founded as the “Isselhorster support association for jointly bearing fire damage”, has nationwide approval today and, in addition to property insurance, also operates liability and accident insurance. The supervisory board and the general assembly work on a voluntary basis. The insurance association is characterized by very high premium refunds (up to 30% of the premiums in 2009).