This article deals with the organizational unit of the fire service. For rail-bound rescue equipment, see fire-fighting and rescue train . 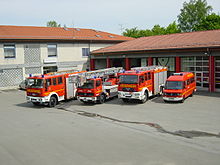 The fire fighting platoon is a tactical unit in platoon strength whose primary task is to fight fires . In Germany , a train according to fire brigade regulation  3 consists of 22 emergency services in two groups and one platoon. Depending on the regional deployment and deployment regulations , fire engines can also be used for technical assistance .

The fire engine is colloquially equated with a fire engine . However, according to the definition, it consists of 22 emergency services on or in their device, i.e. in each case a combination of several vehicles. For organizational reasons, there are often more than 22 people on the fire engines. Especially in rural communities with several districts, the volunteer fire brigade of the respective district or village usually provides a single fire engine . On the other hand, professional fire brigades often operate fire engines with significantly fewer than 22 people for cost reasons.

Especially in the case of larger fire brigades, a fire brigade is often composed of the respective teams

An extended fire-fighting train can also be used in particularly dangerous situations. A fire engine can be expanded by one vehicle up to the group size. After the valid until 2005 fire brigade service provision 5 ( the train in Löscheinsatz ) there was talk of an extension for a further troop (0/1/2/ 3 ).

In some major German cities, the fire-fighting train is supplemented by an ambulance as standard . This primarily travels with you for self-protection, so that no rescue equipment has to be requested for provision. The fire brigades from Munich, Braunschweig or Augsburg are an example of an extinguishing train supplemented with RTW.

Fire fighting train according to AGBF

A fire fighting train according to AGBF can also be put together according to the rendezvous system at the place of use, i.e. H. Vehicles from several locations complement each other at the deployment site for the fire engine.

Usually such a fire extinguishing train consists of