A rescue vehicle ( RW ) is a fire engine that is used to provide technical assistance .

Extensive tools and special equipment are available for this purpose, with which people can be freed from their emergency situations after accidents (especially in road traffic ), environmentally harmful substances can be collected, deployment locations can be illuminated and various other tasks can be performed.

However, the crew consists of only three man, more precisely, a group (0/1/2/ 3 ) . That is why the rescue vehicle is practically never used alone, but together with other vehicles in the rescue train or to support an extinguishing train . In some places the rescue vehicle - contrary to the norm - was also built with a six-person squadron - or even with a nine -person group crew .

Traffic warning device of a RW 1

The rescue vehicle was created when the equipment of the fire brigade for emergency operations became too complex to be loaded onto a fire engine together with extinguishing agents. Originally, most of the vehicles assigned to civil protection were called pioneer vehicles. There was also the auxiliary vehicle (HKW) , which transported a wide variety of materials for technical assistance and additional equipment for fire fighting (e.g. units, hose material , portable pumps ) according to the respective needs .

In 1951, Magirus-Deutz presented the world's first rescue vehicle with an all-round rotating crane at the IAA.

In 1971, Magirus-Deutz also released the so-called rescue vehicle rail, the world's first fire engine that was suitable for both rail and road use . It was z. B. procured by the Frankfurt am Main fire department for use in underground tunnels.

In 1972 the second, almost identical, sister vehicle of the rescue vehicle rail of the Frankfurt fire brigade appeared. 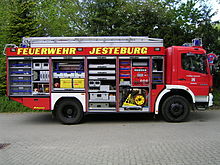 Since the 1970s, Baden-Württemberg had also had a construction guideline for a rescue vehicle acid , which, however, was not widely used. He carried protective clothing and fall arrest equipment. The national standard has meanwhile been withdrawn in favor of the regular rescue vehicles and equipment vehicles for dangerous goods .

In the past, a distinction was made between several types of rescue vehicles according to the DIN 14555 standard. All were characterized by common features such as crew, four-wheel drive, generator, etc. The RW 1 (according to DIN 14555 part 2), procured by the federal government , with a nominal permissible total weight of 9 tonnes, is built on a Magirus-Deutz, Unimog 435 or MAN-VW chassis and is stationed at medium-sized fire brigades, whose number of operations are involved the technical assistance did not justify the purchase of the larger RW 2 (according to DIN 14555 part 3) with 12 tons. Both vehicle types were merged in June 2002 with the introduction of the new DIN 14555-3. In terms of equipment, the standard of the current RW is closest between the earlier RW 2 and RW 3. The omission of RW 1 met with criticism in many places, especially from smaller fire departments. Even without a standard, such vehicles will still be in use for years.

The even larger type RW 3 had already been omitted from the standard in the early 1990s. The procurement of four RW 3 with a relay cabin (RW 3-St) by the Berlin fire brigade and three RW 3 with a crew by the Munich fire brigade took place after this point in time.

General requirements for rescue vehicles and equipment vehicles are set out in DIN EN 1846-2. The relevant national standard for the RW in Germany is DIN 14555-3.

Rescue vehicles are built on an all -wheel drive chassis. There are usually 7-9 equipment rooms, including several deep-drawn ones.

At the front of the vehicle there is a mechanical pulling device with 50 (minimum requirement) to 100 kN pulling force (5–10 t), in the vehicle body or at the rear there is a light mast with two headlights with an output of 1000 W each, which comes from the generator built into the vehicle be fed. This power generator has a minimum output of 23 kVA. There are 308 individual parts on a RW (standard load). In addition, there is additional loading such as B. "Equipment set for oil removal" (+ 110 individual parts) or water rescue. Other less common special equipment can be extensive dangerous goods equipment ("rescue vehicle with special loading of dangerous goods", RW-G) or a crane.