Such mobile or stationary devices can be found everywhere in applications where the public grid is missing or the failure of the power grid ( English blackout ) would lead to serious consequences - such. B. in hospitals , chemical plants , server rooms and last but not least in nuclear power plants , in order to ensure the dissipation of decay heat even in the case of so-called station blackouts .

Soundproof diesel generator set with 375 kVA and a tank below

Emergency power generator from Vorarlberger Kraftwerke on a MAN truck

Historic aggregate for radio operations, around 1945

Power generating sets guarantee the availability of electrical energy independently of the public power grid and are often referred to as emergency power generators or power packs . More powerful units that network operators need to maintain the energy supply, e.g. B. use during maintenance work in the network are called emergency power systems ( NEA ).

The size and performance of such emergency power generators differ considerably. It starts with small portable devices that are sufficient to supply small consumers (e.g. a refrigerator or a PC) or an emergency lighting system, and go through mobile NEA of the THW on truck trailers to large, permanently installed units with several thousand Kilo voltampere (kVA). Normally, NEA can permanently maintain the supply of a number of electricity consumers corresponding to their capacity, but do not feed the electricity into the public grid. This operating mode is called island operation . If this is the case in so-called parallel network operation , a synchronized connection must be ensured. If the unit is equipped with a synchronization device, after the power failure, the so-called network return, it can be synchronized to the public network again and then the unit can be switched off, which avoids an interruption in supply when switching back.

If even a short-term interruption of the energy supply causes lasting damage, the emergency power system must be supported by an uninterruptible power supply (UPS), which takes over the supply immediately after the power failure until the emergency generator has started up in order to produce permanent electrical energy. Uninterruptible power supplies primarily require hospitals, sensitive technical or chemical system controls for the uninterrupted regulation of critical processes, network nodes ( hubs ) and server rooms . If the emergency power system does not have a UPS, there will be an interruption in the event of a failure of the public grid until the unit has reached the necessary operating parameters and can take over the power supply. For units for applications according to VDE 0100-710 and VDE 0100-718, certain time limits are prescribed for the provision of emergency power. 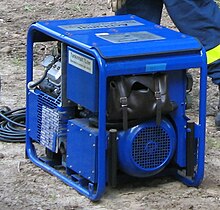 Smaller devices are usually powered by a gasoline engine, while larger ones are powered by diesel engines . In terms of explosion protection, petrol is more difficult to handle and is therefore not permitted under building law for stationary units.

Power generating sets are started by means of a cable pull, compressed air or an electric starter , whereby the last possibility requires the presence of a battery. In nuclear power plants, the start command is given fully automatically by the reactor protection system.

In the agricultural sector to PTO generators so-called can find that the auxiliary drive can be connected or the PTO shaft of a vehicle. These PTO generators do not have their own motor, but are driven by a tractor unit via an intermediate gear and a shaft. This has the advantage that these devices are inexpensive to purchase and maintain, since no internal combustion engine has to be bought and serviced.

In the meantime, hydraulically driven generators up to over 70 kVA are available, which can be driven by the vehicle's own hydraulics. Fuel cell units are already commercially available, but not very common and very expensive.

Stationary emergency power generator: electric generator on the right, the ship's diesel engine on the left

A tricky question, especially with mobile devices, is always whether there is sufficient grounding so that no electrical accidents can occur. It often depends on which protective measures ( fuses , circuit breakers or insulation monitors ) are connected between the emergency power generator and the consumer. As long as individual consumers are connected according to the operating regulations, safety is guaranteed. Since 2007, only generators with insulation monitoring may be used in agriculture in Austria . Insulation monitoring makes the grounding spike superfluous and is safer. With a residual current circuit breaker (FI) an earthing resistance must be achieved that is small enough for the FI to trip. This is often not possible on rocky or sandy ground.

Connection to the public power grid

In most cases, a feed is not desirable for economic reasons or z. B. for tariff customers restricted by legal requirements. There is also a high hurdle, namely the necessary synchronization, which requires additional technical effort. For the infeed, emergency power systems are used that can synchronize with the grid.

Emergency power supplies have prescribed devices such as power failure relays with which they can be connected to the normal building power grid, but then (apart from systems that are designed for short-term parallel operation after voltage recovery in the normally supplying grid) cannot supply power to the public grid. The exact regulations depend on the requirements of the network operator (energy supply company) and on the device description.

In many buildings such as hospitals , substations , TV and radio transmitters or even industrial plants , stationary units are used that have to start reliably. It is not possible to run up the units under load. Therefore, a battery-buffered uninterruptible power supply is necessary to compensate for short failures, to enable the unit to be started (if the battery capacity is low) and to feed the emergency lighting that may be required . In order to keep the time until the power take-over short and the necessary battery backup smaller, diesel engines are sometimes permanently heated to 50 to 80 ° C.

In addition to the investments, there are ongoing costs for maintenance, possibly heating, replacement of equipment and regular test runs if the public network has not failed.

Emergency power generators are also often prescribed in residential buildings of a corresponding size (high-rise buildings) in order to keep safety-relevant systems (lifts / extinguishing systems / emergency lighting) in operation and, in the worst case, to enable orderly evacuation in the event of a power failure. It is important that the systems are serviced by appropriately trained personnel and that they are regularly put into operation in order to prevent 'standing damage' such as the seizing of bearings or the chemical decomposition of diesel fuel.

Another example is the area of ​​logistics. Here part of the data processing is supplied by stationary units, for example to ensure access to the merchandise management system in the event of a power failure.

There are also smaller, mobile devices that are portable or can be mounted on trailers . These are often used for technical assistance, especially for fire brigades and in disaster control. They are not only used in the event of a power failure , but also in areas without power supply, for example for mobile water treatment systems of the KHD , the THW or other aid organizations. The units that are used by civil protection have a power of 2.5 to 14 kVA in the small, mostly portable versions. These are mostly units that have several 230 volt protective contact sockets and are also usually equipped with a three-phase connection. The more modern devices of the THW are driven by four-stroke engines. However, there are also older models with two-stroke engines . However, due to their unreliable starting properties, these are increasingly being displaced. If they are still used, it is for the reason that the engine works better than a 4-stroke engine under certain operating conditions. Emergency services units are usually synchronous generators that can guarantee the high starting currents required for equipment (e.g. an angle grinder). The units mounted on trailers are predominantly equipped with diesel engines, which provide an output in the range between 20 and 630 kVA. In addition to the use of fossil fuels, there are already the first power generators that make full or partial use of renewable energies . The wind or solar energy is used via solar cells or wind turbines. Hybrid models also use fossil fuels in order to still be able to generate electricity in adverse weather conditions (lack of sun or wind).

For the board power supply of vehicles with increased electricity demand created especially for these applications vehicle power generators are used, they are usually distinguished by a shock-resistant suspension and a fully closed Schalldämmkapselung of which is made possible by the use of water-cooled engines and generators.

The noise emission in such systems is only about 56 dBA at 7m, which makes these power generators particularly suitable for applications in mobile workplaces or lounges.

The power range is normally between 2 and 50 kVA, diesel-powered engines are predominantly used for this purpose, and gasoline-powered or gas-powered power generators are increasingly being used due to stricter emission regulations.

Another advantage of the water-cooled motors, in addition to their particularly small design, is the possibility of using the waste heat, which can thus be used to heat rooms by means of a heat exchanger / radiator; the heat output corresponds roughly to the electrical output output.

Mobile units are also used in aircraft during maintenance or before take-off. If the aircraft are supplied from the mains power source, come because of the different voltage (110 volts) and a frequency of (400 Hz) and a frequency converter is used.

In the electric vehicle sector, power generators are used to extend the range, see Range Extender .