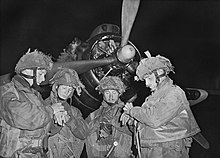 Simple synchronization of the time measurement through clock comparison

The many classic station clocks are synchronized (one-sided) by the second hand advancing slightly faster than every second and waiting for the minute signal when the fifty-ninth second is displayed. In the general case, one of several processes running in parallel is waiting at a specified point (a station) for another process to reach a specific station.

While sound or light signals were used for this in the past - over long distances e.g. B. heliotropes (sun mirror) or powder lightning signals ) - today radio signals or electronic methods predominate . The most important methods of electronics and physics are dealt with below.

Synchronizing in this context means adapting the individual elements on the playback device to a data source (e.g. MP3 player, music player on the computer). This means that the clock of the device is identical to the data source after synchronization.

In film , synchronization means the "simultaneous" running of picture and sound, while dubbing films is usually referred to as synchronization. In Germany, non-German-language films have been dubbed since the 1930s , as well as in Austria and Switzerland. Of course, you synchronize in the respective national language in other large countries in Europe and America, as well as almost 100% in India, China and Japan. In Asian countries, English dubbing is usually done for the international market (see voice actor , sound engineer ). The voice of singers on a playback or the transfer of other instrument voices is also referred to as synchronization; see also overdubbing .

When watching TV , the playback device must run synchronously with the transmitter so that the information sent is displayed in the right place on the screen. Because of the grid of lines that are written one after the other, a distinction is made between horizontal and vertical synchronization . Electrically these signals can either be performed separately in addition to the (amplitude-modulated) luminance signal and with this in a suitable manner so the composite video - or composite be combined signal that it can then be easily separated again.

The synchronizing signals have to fulfill a special task in the interlaced process , namely the alternating switching of the display of even and odd lines depending on the field . To do this, the horizontal pulse has to occur half a line earlier within the blanking interval (the easiest way is by doubling the frequency) so that the first line of the second field begins right at the top in the middle of the screen, where the first line written in the previous field has already dropped half a line is. The same applies to analog computer monitors if they use the same method at higher resolutions (so-called interlace ; no longer common today, as all new monitors can process horizontal frequencies of up to 85  kHz and above).

There is another variant of synchronous signal routing for monitors: On some devices with separate inputs (mostly BNC connectors) for the 3 ( RGB ) color components or 2 color difference + 1 brightness signal ( component video ), the synchronous signal is generated in a similar way to Mixed up in the green (or brightness (Y)) signal: Sync on Green. In most cases, the sync signal can also be connected separately, with the horizontal and vertical signal either combined (1 connection) or separated into two separate connections, depending on the device. With today's VGA connection , the sync signals are transmitted via different pins of the same connector.

If the synchronous signals are not transmitted correctly (without interference) or are not correctly evaluated, characteristic picture interference occurs. Since the image change is the slowest (typically 50–100 Hz), errors can most easily be followed with the naked eye: the image “runs through (vertically)”, but is still halfway recognizable. Sometimes the synchronization locks in the wrong place on the vertical, e.g. B. with significant image content with a corresponding voltage swing, so that the image is displayed offset, with a thick, black bar in the middle. If, on the other hand, the horizontal synchronization fails, the lines “run through (horizontally)”, perform a “belly dance” or are shifted irregularly and there is hardly any image content to be recognized; in the best case, the image is tilted to the left or right.

Synchronization of a synchronous machine

In order to connect a synchronous machine to the grid, certain synchronization conditions (including parallel connection conditions) must be observed. There must be no voltage difference between the terminals of the network and those of the machine. This is achieved when the following conditions are met:

If these conditions are not met, depending on the size of the difference, more or less large moments occur as the machine tries to pull itself into synchronous operation. These moments act on the machine and the machine foundation and can lead to damage or even destruction.

In modern systems there is no longer any manual synchronization. This task is z. B. is taken over by control technology in power plants and requires no human intervention other than triggering.

In transmission technology , the term synchronization is understood to mean the adjustment of the speeds of the shift sleeve and gear wheel. A gear can only be engaged if the idler gear to be engaged and the shaft on which this idler gear sits have the same speed so that a form fit can be achieved (usually with interlocking claws). This is usually caused by friction between a conical synchronizer ring , which is coupled to the shaft via a synchronizer body, and a cone on the gear wheel, as long as the shaft and gear wheel rotate at different speeds. The resulting frictional torque rotates the synchronizer ring by about half the pitch of the shift gearing until the shaft and gear wheel rotate at the same speed.

Once the synchronization, i.e. the braking or acceleration of the input shaft, which runs loosely from the clutch disc in the disengaged state, to the speed of the gear wheel is complete, switching can be carried out easily and silently. If it is not synchronized, the mass moments of inertia of the loose shaft part running too slowly or too quickly “pop” into the claws, which can lead to increased wear of the claws or damage. Synchronizer rings are wearing parts ; As a rule, the synchronizer ring of the second gear wears out first because it is used most frequently. Very old vehicles that do not have synchronizer rings (unsynchronized gearbox) or in a part of the course no synchronization (some synchronized transmission), the careful driving demand with false domes startup and declutching when downshifting, in which engaged in transmission neutral short again in order to adjust the speed on the idle shaft approximately to that of the connection partner, whose speed is determined by the driving speed and the selected gear ratio.

If engines are supplied with a gasoline-air mixture in parallel from several carburettors, the carburettors must be synchronized with one another. The carburettors are operated via Bowden cables or a linkage . However, uneven play in the cables or in the linkage means that the throttle valves are open unevenly when idling or do not open equally wide when accelerating. This in turn leads to a different filling in the cylinders. This results in different working pressures in the cylinders, the engine does not achieve maximum output, has poor exhaust gas values ​​and possibly undesirable vibrations.

Several vacuum gauges are used for a carburetor synchronization, at least two for comparison, but ideally as many vacuum gauges as there are carburetor systems: on motorcycles up to six, e.g. B. Honda CB 1000, with sports car engines sometimes even more (old racing engines from Ferrari etc.). On the carburetors themselves or on the intake manifold bridges there are individual connection bores, usually closed with screws, per cylinder or per carburetor system, to which the vacuum gauges are connected by means of screw connections and hoses. First, all idle suction ratios are adjusted (same vacuum ratios by adjusting the individual throttle stops), then the even lifting of all throttle elements when accelerating is set or checked. If the setting is correct, all cylinders are evenly supplied with the fuel-air mixture, both when idling and in all load conditions.

In extreme cases (several register carburetors) not only the "small" systems should work synchronously with each other (the carburetor subsystems for idling and small load), but also the downstream opening "large pipes" for high loads (e.g. Mercedes 230 -6/8, 250/8, BMW 2500, BMW 2800 and similar vehicles).

A prerequisite for good carburetor synchronization is an engine that runs mechanically equally well on all cylinders: compression values ​​of the individual cylinders within the tolerance limits, valves well adjusted, ignition settings ok, spark plugs ok, and the carburettors all equipped with the same nozzle elements (in the case of of defective vehicles to be restored a not uncommon error that unevenly sprayed carburettors are installed.) After a few 100 km the spark plug pattern (color of the insulator) can provide information about inequalities or a "bad" cylinder (too light gray: cylinder runs too lean or does not get enough petrol; dark color towards black: cylinder runs “too rich”, with too much fuel).

Experienced riders of BMW two-cylinder motorcycles sometimes manage to properly synchronize the two carburettors without vacuum gauges only while observing mechanical vibrations: by minimizing mirror vibrations on the handlebars.

The maximum vacuum deviation between the carburettors should not be more than 1/100 bar. This places very high demands on the accuracy of the pressure gauges. Capsule pressure gauges with zero point adjustment meet this requirement.