Judith Kerr OBE (born June 14, 1923 in Berlin ; † May 22, 2019 in London ) was a British illustrator and writer of German origin. In Germany she was best known for her youth books, in which she describes the story of her Jewish family's flight from Nazi Germany and life in exile .

Judith Kerr was the daughter of the theater critic Alfred Kerr and his wife Julia , nee Weißmann, and the sister of Michael Kerr . In 1933, as they were persecuted in Germany, the Kerr family fled via Switzerland to France , where Judith attended school for two years and learned French. In 1935 the family moved to England , where they initially lived in a small hotel in London.

Kerr attended the Central School of Arts and Crafts . During the Second World War she worked for the Red Cross . After the war, Kerr worked as an editor and proofreader for the BBC , where she met her husband, British television writer Nigel Kneale , to whom she was married from 1954 until his death in 2006. As a freelance painter and text designer, she also illustrated numerous children's books, including A Tiger Comes to Tea , which she wrote herself .

Her children are actress and painter Tacy Kneale and writer Matthew Kneale .

Judith Kerr was a member of the PEN Center Germany . She had lived in London since 1935, where she died in May 2019 at the age of 95 after a brief illness.

In 1971, Kerr published Als Hitler Stole the Pink Rabbit . Here, as in the two following books, Waiting for Peace Comes (1975) and A Kind of Family Reunion (1979), she described her family's escape from National Socialist Germany.

In addition to these three novels, Kerr published other stories in England, not all of which were published in Germany, but mainly picture books that she illustrated, including 17 volumes with stories about the cat Mog. She also worked as a writer for the BBC in London and published in English .

In England she became famous for her picture books, most notably A Tiger Comes to Tea (1968), which was filmed in 2019 , and the series with the cat Mog. She says she loved telling stories through pictures. In words, she was not only economical out of consideration for the difficulties of learning to read, but this was also due to stylistic ideals from her childhood, including The Adventures of Tom Sawyer . She named the children's author Dr. Seuss .

During her lifetime, Kerr's books were translated into 25 languages ​​and sold a total of over ten million copies.

When Hitler stole the pink rabbit (2002 edition, without the title drawing by Judith Kerr) 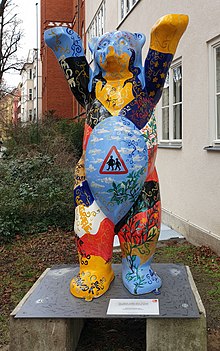 Kerr has received many awards for her books; Among other things, she received the German Youth Literature Prize in 1974 for When Hitler Stole the Pink Rabbit .

In 2012, Kerr was named Officer of the Order of the British Empire for services to children's literature and holocaust education .

On December 25, 2019, the film As Hitler stole the pink rabbit by director Caroline Link was released in German cinemas.