Schmargendorf is a district in the Charlottenburg-Wilmersdorf district of Berlin , which has been able to maintain its independent and rather small-town character with its own district center in Breiten Strasse and Berkaer Strasse to this day.

Schmargendorf is located on the Teltow plateau in the southwestern part of Berlin with an average height of around 40 meters above sea ​​level .

Extension and boundaries of the district 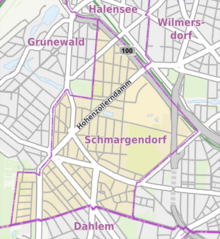 The BVV application that led to the definition of the new districts at the time describes the problem of delimiting the districts very succinctly:

According to the official district map of Charlottenburg-Wilmersdorf, the boundaries of the district can be described as follows: In the northeast, the city ​​motorway and the ring railway form the border to the districts of Halensee and Wilmersdorf . In the south-east, it is demarcated from Wilmersdorf by Mecklenburgische Strasse and Zoppoter Strasse . In the south the Lentzeallee and the Pücklerstraße form the border to Dahlem . It gets more difficult in the west: Coming from the south, the border with the district of Grunewald runs northwards west of the Goldfinkweg at the edge of the forest to Waldmeisterstraße and then follows this eastwards again to Clayallee . It follows this and the adjoining Hohenzollerndamm northeast to the Roseneck. Now the border runs northwards following Teplitzer Strasse to Hubertusallee, and then briefly to the southeast along Franzensbader Strasse and then Reinerzstrasse . Finally, the Auguste-Viktoria-Straße, leading north to the city ​​motorway, forms the border with the Grunewald district. 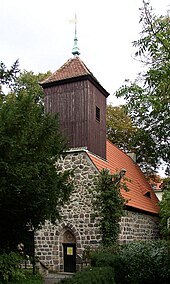 The village church from the 14th century

The foundation probably took place after 1220 in the course of the state expansion of the young Margraviate of Brandenburg , to stabilize the Ascanian margraves called settlers from Swabia , Thuringia , Flanders and Westphalia into the country. A village of the Slavic pre-population very likely did not exist here.

The settlers lived by farming, sheep farming and fishing in the Wilmersdorfer lake of, for glacial glacial trough of Grunewaldseenkette belonged and was filled in 1915 after long silting processes.

It belonged to the von Wilmersdorff family as early as the 15th century . In 1799 Leopold Heinrich von Wilmersdorff (1732–1802) sold Schmargendorf to the Count of Podewils on Gusow, Friedrich Heinrich von Podewils . After his death in 1804 Karl Friedrich von Beyme acquired Schmargendorf. In 1807 the farmers were given the opportunity to purchase the land they cultivated. After Beyme's death, his daughter Charlotte Gerlach sold the Schmargendorf estate to the Prussian domain treasury .

The place received the status of an independent administrative district in 1899 (with about 2,000 inhabitants). In 1900 the now around 3,000 inhabitants had the new town hall built (at that time still on open fields) after the community had become rich mainly through the sales tax from property sales by the farmers, which, among other things, had been used for the expansion of Hohenzollerndamm since 1899 into a wide boulevard after the Patterns of the Kurfürstendamm were required.

The rural community of Schmargendorf was spun off from the Teltow district in 1920 and incorporated into the then new administrative district of Wilmersdorf as a district in Greater Berlin ; at that time it had 11,581 inhabitants.

The Wilmersdorf district went from 1 January 2001 in the new Charlottenburg-Wilmersdorf on many buildings and facilities in Schmargendorf wear (yet) the former county name which is not to be understood as a place name, such as stadium Wilmersdorf , power plant Wilmersdorf , Stadtbad Wilmersdorf and Wilmersdorfer Seniors Foundation.

When it was incorporated into Greater Berlin, it lost its validity and disappeared from official use. 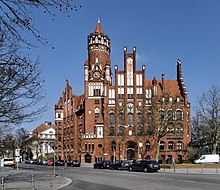 The town hall Schmargendorf on Berkaer Platz was built from 1900 to 1902 by Otto Kerwien in the style of Brandenburg brick Gothic and is based on medieval models from Stendal and Tangermünde . The district registry office has been located in the building since 1920 .

The village church of Schmargendorf from the 14th century is a typical field stone church in Brandenburg . With a usable area of ​​66 m², it is the smallest preserved church in Berlin. The truss - roof turret was built in 1831 and is paneled with wood since 1957th In 1937/1938 the church was largely restored to its original early Gothic condition and extensively renovated from 1990 to 1992. The baroque crucifix inside the church is dated to around 1700.

The Kreuzkirche from 1929 at Hohenzollerndamm 130 is one of the few expressionist sacred buildings .

The high-rise at Roseneck was one of the first high-rise buildings in Berlin. It was built between 1954 and 1955 according to plans by Franz Heinrich Sobotka and Gustav Müller and has 15 floors. Because of the Y-shaped floor plan, all apartments have at least one south-facing room. The roof was used for fire protection in the summer of 2009 in order to observe the nearby Grunewald .

The former birth house in Dahlem on Lentzeallee was a maternity home run by the Missionary Sisters of the “Sacred Heart of Jesus” from Hiltrup from 1923 to 1971 , after which it was used by Senate administrations. Since March 2003 it has housed the international train of the private Kantschule, the Berlin International School.

The Germania cinema, which opened in 1929 on the corner of Ruhla and Hundekehlestrasse, was destroyed in the Second World War. The three movie theaters in Schmargendorf that were still preserved after the war - the Dedy in Warnemünder Straße (today: Aldi ), the Melodie cinema in Marienbader Straße (in the 1950s in the AEG building on Cunostraße ) and the German movie theater (since 1951 : Kammerspiele Schmargendorf ) in the Breiten Straße 33, about 100 meters from the village church, fell to the cinema die in the 1960s and 1970s. Two have been converted into supermarkets, the latter demolished. 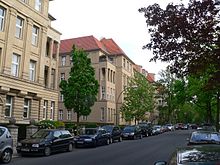 The old course of the Breite Straße with many old buildings fell victim to straightening and widening for new buildings. The tram (line 51 from Roseneck to Bahnhof Zoo ), which meandered through the slightly winding street, was replaced by a bus line (former line A60).

In 2018, a so-called Tempohome shared accommodation (residential container) for up to 160 refugees was opened on Fritz-Wildung-Straße, the first of its kind in the Charlottenburg-Wilmersdorf district.

→ Main article : List of streets and squares in Berlin-Schmargendorf

In Schmargendorf there are 78 dedicated streets and 9 squares. 18 streets of these continue in neighboring districts with the same name. The total length of these streets in the district is 39.5 kilometers. 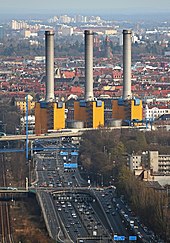 The Berlin-Wilmersdorf power plant seen from the radio tower , the city ​​ring in the foreground

The Wilmersdorf power station at Forckenbeckstrasse 3-6 was built in 1977 as a peak load power station on the site of the 1911 power station, which was dismantled in 1964. It works on the principle of combined heat and power , i.e. it generates electricity and heat at the same time. The three shimmering silver chimneys , each 102 meters high, are visible from afar . The operator of the power plant is the energy supply company Vattenfall .

The Berlin factory of the Reemtsma cigarette factory at Mecklenburgische Strasse 32 was the largest industrial facility in Schmargendorf. It was built between 1958 and 1959 on an earlier allotment garden . The distinctive chimney was raised in the 1980s because of a temporary odor nuisance. As a compensation, the company had already made the former Iserhatsche company recreation home in the Lüneburg Heath as a school camp available to the children of the district's schools . In 2008 the Imperial Tobacco Group decided to give up the location, and in June 2012 the factory was finally closed. A private investor has been working on the revitalization of the site as a mixed commercial and residential area since 2018.

The former site of the Bosch company at Forckenbeckstrasse 9-13 was given up for industrial use in 1995 and converted. As the Schmargendorf industrial park , it is now one of the five important business locations in the Charlottenburg-Wilmersdorf district.

The school book publisher Cornelsen set up a new company headquarters in 2004 on the corner of Mecklenburg and Friedrichshaller Strasse . The previous building of the publishing house - on the opposite side of the street Mecklenburgische Strasse and thus in the district of Wilmersdorf - will continue to be used. The publishing house employs around 650 people at this location.

After 2013, a media center for the film industry was built on the former AEG site on Hohenzollerndamm.

In the middle of the 20th century, the Committee for Economic Manufacturing (AWF) and the Rationalisierungsgemeinschaft Verpackung (RGV), two important sub-organizations of the Rationalization Board of Trustees of German Business (RKW), had their headquarters at Auguste-Viktoria-Straße 66 .

The Breite Strasse and Berkaer Strasse form the center of Schmargendorf as shopping streets with numerous businesses.

Tram railcar of the western Berlin suburban railway in the Breiten Strasse, around 1910

The Berlin-Schmargendorf ring station , which is now called Heidelberger Platz , opened on December 15, 1883 and is located about two kilometers outside the town center , is already in the Wilmersdorfer area and forms a unit with the subway station of the same name . Some operating facilities of the S-Bahn, such as the rectifier substation in Falkensteiner Strasse, are located in the Schmargendorf area.

Trams have operated in Schmargendorf since May 18, 1888 : The Wilmersdorf-Schmargendorfer steam tram Reymer & Masch drove from Schöneberg (Twelve Apostles Church - Schöneberg - Grunewaldstrasse) via Wilmersdorf , Wilhelmsaue, through Mecklenburgische Strasse to Schmargendorf. The Berlin steam tram consortium continued the route from 1889 to the Hundekehle. In May 1898, the consortium signed contracts with the communities of Wilmersdorf, Steglitz, Friedenau , Schmargendorf and the Grunewald colony to convert the suburban steam trains into electric trains with overhead lines . On April 30, 1957, the last tram line 51 running in Schmargendorf (Roseneck - Bahnhof Zoo ) was discontinued and replaced by the bus line A60 - today's line 249.

The bus lines M29 , 249 and partly 186 end at the Roseneck. The Roseneck can also be reached via the bus lines X10 and 115. The bus routes 110 and 310 go through the district. During the night, public transport in Schmargendorf is guaranteed by the N10 night bus. 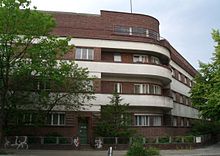 Retirement home of the Jewish community in Berlin

as well as in the town hall Schmargendorf

From 1946 to 2013, the Dahlem Park Sanatorium was located in Palais Gerstenberg at Hammersteinstraße 20, last operated by the German Red Cross . 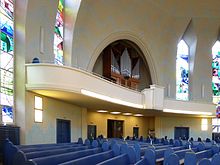 Both cemeteries are combined in one facility, the churchyard consists of sections A, B and C in the immediate vicinity of the village church Schmargendorf.

On the site between Stadtrings , Forckenbeck-, Cuno- and Fritz-Wildung-Straße (1937–1968: Lochowdamm ) there are several sports facilities that were built from rubble on the site of the former gas works after the Second World War . The Wilmersdorf football stadium is the home of the BSV92. Due to the drastic decrease in spectators, the grandstands of the north curve were planted with wine in 1984.

In 1974 today's Horst-Dohm-Eisstadion (formerly: Eisstadion Wilmersdorf ) was opened in the immediate vicinity . It has, among others, a 6170 m² ice rink and an Olympic-sized 400-meter speed skating rink. In 1985, the first took place here Speed Skating - World Cup races held in Germany.

In addition, the Wilmersdorf summer swimming pool (formerly: Lochowbad ) and the Wilmersdorf II municipal swimming pool run by the Berlin swimming pools and several sports halls are located on the site . The Werner-Ruhemann-Sporthalle was built between 1961 and 1964 and destroyed by arson on April 22, 1993. It was rebuilt and reopened on November 26, 1994. It is named after the internist and sports doctor Werner Ruhemann (* December 7, 1895 - July 6, 1953), who was the 1st chairman of the Berlin State Sports Federation from 1951 to 1953 .

In 2008, a modern sports hall was built at Forckenbeckstrasse 20, which was named after the athlete and sports medicine specialist Harald Mellerowicz in 2009 .

Finally, several football and tennis courts as well as a tennis hall were built on the site. The multi-purpose facility Forckenbeckstraße is located in Cunostraße, which is operated by the sport shooting club Kleinkaliberschützen Berlin e. V. is used.

The tennis courts of the Grunewald Tennis Club have been located on Flinsberger Platz since 1935.

The traditional weightlifting hall on Karlsbader Strasse is currently used by the Heros Berlin Athletics Club. 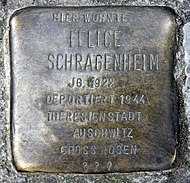