Today the district is considered to be a more middle-class place of residence and has an advantageous social structure . Charlottenburg-Wilmersdorf is one of the top-selling business and trade centers in Berlin .

The technical university located in the district is part of the federal government's excellence strategy and is one of the largest of its kind in Germany. The European Film Academy is located on Kurfürstendamm and organizes the annual presentation of the European Film Prize .

→ Main article : Charlottenburg and its history

Charlottenburg emerged from the community Lietzenburg (originally Lietzow ), on whose territory in honor of Queen Sophie Charlotte , the Charlottenburg Palace built in 1705 and the city Charlottenburg was founded. Until it was incorporated into Greater Berlin in 1920, Charlottenburg developed into the richest city in Prussia .

→ Main article : Wilmersdorf and its history

The former district of Wilmersdorf and today's district was founded after 1220. In the middle of the 18th century, the first citizens of Berlin bought land and farmhouses in what was then Deutsch-Wilmersdorf and set up summer residences in the Wilhelmsaue . On April 1, 1907, Wilmersdorf left the Teltow district and became an independent urban district. From 1912 the city was called Berlin-Wilmersdorf. On October 1, 1920, the city was incorporated into Greater Berlin.

The district was created on January 1, 2001 through the merger of the two former West Berlin districts of Charlottenburg and Wilmersdorf . In 2004 the district was divided into the current districts.

The area around Kurfürstendamm, as City West, has one of the two central functions for the whole of Berlin in addition to the historical center . Notable institutions in the district include the Technical University , the University of the Arts , the Deutsche Oper , the Olympic Stadium and the exhibition grounds under the radio tower with the CityCube , which replaces the nearby International Congress Center ICC . 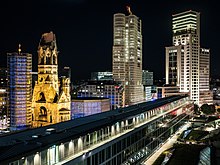 Breitscheidplatz with the Kaiser Wilhelm Memorial Church in Charlottenburg 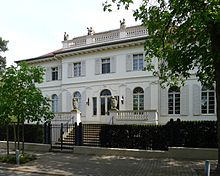 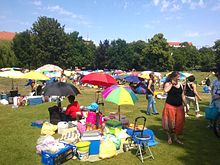 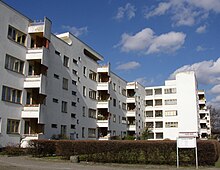 The district is divided into seven districts :

The district of Charlottenburg includes, among other things, the historic old town of Charlottenburg with the castle of the same name and the former zoo district , better known today as City West or, between the World Wars, also known as the New West . To this day, the area around Bahnhof Zoo with the boulevard Kurfürstendamm has played a central role for large parts of western Berlin.

During the Second World War , the eastern part of the village was severely destroyed, which is still reminiscent of the Kaiser Wilhelm Memorial Church , which has been partially preserved as a ruin . The north and west of Charlottenburg suffered significantly less destruction, so that in certain areas, such as the old town or the Danckelmannkiez , an almost homogeneous pre-war townscape was preserved.

North of Charlottenburg lies the district of Charlottenburg-Nord , which was redefined in 2004 and , with its large housing estates, contrasts with the historical and, in some cases, very spacious buildings in the south. The industrial atmosphere of the north of Berlin can already be felt here. As a settlement area, the area only emerged after the Second World War as a reaction to the omnipresent housing shortage, on part of the historic Volkspark Jungfernheide , which extends over a large part of the local area to this day.

Originally planned as a pure villa colony for the growing city of Charlottenburg from the 1860s, today some areas in Westend also have the typical (West) Berlin ambience with a mixture of apartment buildings and commercial premises. On the occasion of the 1936 Summer Olympics , the Nazi regime had large-scale sports facilities built here, which are still used today for major events. A special feature is the Corbusierhaus , a high-rise building that was built by the architect Le Corbusier in 1957 as part of the Interbau 1957 international building exhibition . 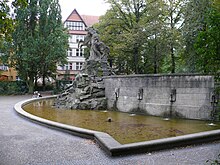 The current district of Wilmersdorf essentially consists of the former center of the former district of Wilmersdorf around the so-called Carstenn figure , a historical street structure with the Bundesallee (until 1950: Kaiserallee ) in the center and the four corner points Fasanenplatz , Nürnberger Platz , Prager Platz and Nikolsburger Platz . The area east of the Bundesallee was badly damaged in the Second World War, so that the historical urban structure is hardly recognizable there. The car-friendly urban planning of the 1960s and 1970s also made a major contribution in this part of the location to destroying the cohesive urban planning image of the Wilmersdorfer Carstenn figure. To the west of Bundesallee, on the other hand, ensembles such as the Fasanenplatz and Nikolsburger Platz ornamental squares are well preserved.

The actual nucleus of the local situation, the north of People's Park Wilmersdorf located Wilhelmsaue with the neo-Gothic Auenkirche and Schoelerpark-castle , the oldest building of Wilmersdorf. The Volkspark was created in 1915 on the site of the former Wilmersdorfer See , which was drained from 1915.

Adjacent to the south and also belonging to the Wilmersdorf district is the Rheingauviertel and the artists' colony . The Rheingauviertel was completed shortly before the First World War as a country house colony in the English style for upscale living and is largely preserved in this form. The artist colony from the 1920s, which was established by the interest group for artists and writers for Berlin's cultural workers, has largely remained unchanged.

Named after the Halensee in the neighboring Grunewald , the area of ​​today's Halensee district was planned as a villa and apartment block for upscale living. In the 1920s, many Russian emigrants who had to leave their homeland as a result of the October Revolution settled here . The destruction in the Second World War also affected parts of Halensee and the subsequent reconstruction permanently changed the character of the district. In the bomb gaps, social housing was initially built and later numerous high-rise office buildings and the city ​​motorway . This route limits Halensee to the districts of Grunewald and Schmargendorf . The Kurfürstendamm divides the small district in two halves.

Between AVUS and the Grunewald lies Schmargendorf , which has retained its small-town character with its own historic district center to this day. The registry office in the historic town hall of Schmargendorf is particularly popular with wedding couples .

Lilly Wust , better known as Aimée from the film and factual novel Aimée & Jaguar , which tells of her love for the Jewish journalist Felice Schragenheim , lived at Friedrichshaller Straße 23 . Much of the plot of the film and book takes place in this apartment.

The district of Grunewald is named after the forest of the same name, which takes up a large part of its area. Since its creation in the 1880s, it has been one of the wealthiest areas in Berlin. Grunewald is characterized by stately mansion developments, such as the Palais Mendelssohn , which was restored in the 1960s with contemporary construction elements and has since been used by the Johannische Kirche as St. Michael's home . Then as now, there are many embassies and numerous ambassador residences in the Grunewald district. The Grunewald train station has a dark history . From there, from 1941, the Berlin Jews were deported , primarily to concentration and extermination camps in Eastern Europe . The Gleis 17 memorial has been a reminder of these crimes since 1988 .

Population pyramid of the Charlottenburg-Wilmersdorf district 2010

Ludwig-Erhard-Haus of the IHK Berlin

In comparison with the other Berlin districts, with around 28,000 companies, the second most companies are based in Charlottenburg-Wilmersdorf.

The Berlin exhibition center is located in the Charlottenburg-Wilmersdorf district and is operated by Messe Berlin . The area is one of the largest of its kind in Europe. Numerous leading trade fairs take place here every year, such as For example, the International Green Week, the International Radio Exhibition, the International Tourism Exchange Berlin, InnoTrans, Fruit Logistica or Venus Berlin.

In 2012, of the 30,862 craft businesses based in Berlin, a total of 2,761 were registered in Charlottenburg-Wilmersdorf.

The motorways A 100 , A 111 and A 115 as well as the federal highways B 2 and B 5 run through the Charlottenburg-Wilmersdorf district. In this context, the following two historic garages are noteworthy for private transport:

Some regional and international bike trails run through the district, u. a. the Spreeradweg and the Europaradweg R1 . 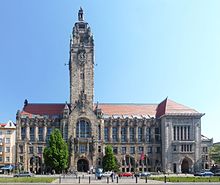 The Charlottenburg-Wilmersdorf district is represented on the state level in the council of mayors .

As part of the election to the Berlin House of Representatives , the District Assembly of Charlottenburg-Wilmersdorf was elected in September 2016.

→ Main article : Coat of arms of the Charlottenburg-Wilmersdorf district

The coat of arms of the Charlottenburg-Wilmersdorf district was awarded on September 4, 2001 by the Berlin Senate .

Description of the coat of arms: Under the silver-blue split shield head, inside three lilies in confused colors, in gold a pinned blue castle gate with open black portcullis, the side towers with domed roofs, the central building with a hipped roof, which is covered with two averted flags, the right one black -silver, the left split silver-red. The side towers are each covered with a shield: on the right, in silver, a golden crowned and armored black eagle with golden shamrock stems on the wings and on the chest covered with the golden monogram FR , overlaid by a golden royal crown; on the left a silver jumping horse. A red three-tower wall crown rests on the shield , the central tower of which is covered with the Berlin coat of arms .

Justification of the coat of arms: The coat of arms was created from the previous coats of arms of the districts of Charlottenburg and Wilmersdorf . The lower field of the divided shield shows a floating blue tinned castle gate with a raised black portcullis in the passage of the central building. This element of Charlottenburg has some historical details - the front tower symbolizes the Kingdom of Prussia with the shield with the Prussian eagle and the black and white flag, while the rear tower stands for the House of Hanover , with the jumping horse and the white and red flag. The element of Charlottenburg Palace was enriched by the three blue and silver-colored lilies, which were borrowed from the coat of arms of the Wilmersdorf district - these elements refer to the founders of Wilmersdorf from the von Wilmersdorf family, which died out in 1802. The crown of the wall is the connecting element of all Berlin districts .

The Charlottenburg-Wilmersdorf district of Berlin has the following partnerships :

Directorate 2 of the Berlin State Police is responsible for the districts of Charlottenburg-Wilmersdorf and Spandau . 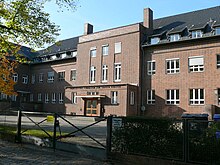 The Berlin radio tower , built in 1926, is the tallest structure in the district 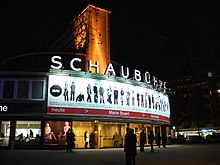 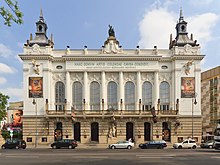 Theater of the West 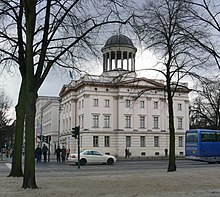