Grunewald is a district in the west of Berlin's Charlottenburg-Wilmersdorf district and was named after the Grunewald forest of the same name . The district is one of the wealthiest areas in Berlin.

In the 1880s, following personal intervention by Chancellor Otto von Bismarck , the Prussian state sold 234  hectares of the Grunewald forest to the Kurfürstendamm-Gesellschaft , a bank consortium that had set itself the goal of creating an even more expensive one based on the model of the extremely successful villa colonies Alsen and Lichterfelde to build a residential area. The later "Millionaire Colony Grunewald" was created. In this context, the Kurfürstendamm was also expanded, and so a new noble residential area, the villa colony Grunewald, was built at its western end in 1889.

Due to structural requirements, large plots of land were required, only a small part of which could be built on. Grunewald developed into one of the wealthiest residential areas in Berlin, although the villas are stylistically very heterogeneous. Around 1870 the artificial lakes Hubertussee (previously: Torffenn ), Herthasee (Rundes Fenn) , Koenigssee (Langes Fenn) and Dianasee (Diebsloch) , located in the glacial channel of the Grunewaldseenkette , were excavated and filled with water via artesian wells . They were created along the formerly swampy area. This achieved two things at the same time: on the one hand, it eliminated moorland areas ( fenns ), which were feared as sources of infection , and on the other hand, it created attractions for the potential residents at the same time, as the villas were grouped around the lakes and the lakeshore and hillside areas were free of anyone Buildings remained and became private gardens and parks. Large numbers of entrepreneurs, bankers, academics and artists, often of the Jewish religion, chose the now attractive area as their residential area.

The clearing necessary for the construction work and the resulting wood sales were reflected in the Berlin street hooter Im Grunewald, in Grunewald is wood auction , which was founded around 1892.

When it was incorporated into Greater Berlin in 1920, 6449 inhabitants were counted in Berlin-Grunewald rural community and 507 inhabitants in Berlin-Grunewald forest district . From Grunewald station in place during the Shoah in October 1941, the deportation of Berlin Jews primarily in easternmost concentration and extermination camps . The memorial platform 17 has been a reminder of this since 1998 .

In the post-war years , the Teufelsberg , named after the nearby Teufelssee, was heaped up in Grunewald from rubble and rubble from the destroyed inner-city district on the site of the unfinished and abandoned Defense Technology Faculty of the National Socialists . The Teufelsberg is today the second highest elevation in Berlin. During the Cold War , the US Forces set up an air traffic control and listening station on the top of the mountain. After the fall of the Berlin Wall and the withdrawal of the Allies, the striking ruin complex fell into disrepair. The building is currently empty. In the meantime, guided tours are offered that also explicitly refer to the street art that was created in and on the buildings in the post-reunification years .

The people of Grunewald live linguistically correct in (not in ) Grunewald. The district is still the most expensive property area in the Berlin villa arc, which extends in the south-west of the city from Lichterfelde-West in the south, via Dahlem and Grunewald to Westend . As in many cities, the prevailing westerly wind conditions also played a role here, as the exhaust gases from business and domestic heating systems are blown in the opposite direction.

The Grunewald train station serves the S-Bahn line S7. This line connects to the historical center and the city ​​of West Berlin with Potsdam .

At the east end of the district begins at Rathenauplatz the Kurfürstendamm , which leads from here through the entire City West and on Breitscheidplatz with the Kaiser Wilhelm Memorial Church in Charlottenburg ends. Also starting from Rathenauplatz is a motorway junction of the Berlin city ring A 100 .

The AVUS , which runs from the city ring at Dreieck radio tower to Spanische Allee in Nikolasee and on as A 115 to Berliner Ring ( A 10 ), runs parallel to the S-Bahn tracks to the west. The AVUS is the main connection for individual traffic between downtown Berlin and the villa suburbs on the Großer Wannsee and Potsdam . It was the world's first autobahn in 1921 . It divides the district of Grunewald into two halves, with the villa colony Grunewald on the eastern side and the almost uninhabited Grunwald forest on the western side . On the occasion of the 1936 Summer Olympics , both the marathon course and the road bike race course were run by AVUS. 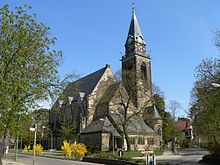 Embassy of the Emirate of Kuwait

The embassies of the federal states are located in Grunewald 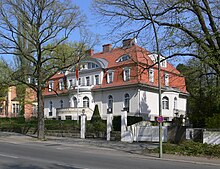 Residence of the Turkish ambassador

In addition, the following countries maintain private ambassadors' residences in the Grunewald district:

This district had and has many prominent residents from politics, science, culture and business:

Memorial plaque for Hermann Sudermann and Rolf Lauckner on Bettinastraße 3 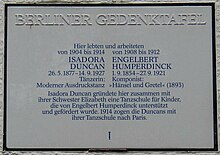 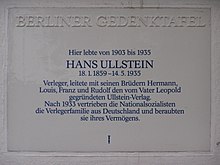 Memorial plaque for Hans Ullstein at the house at Bettinastraße 4