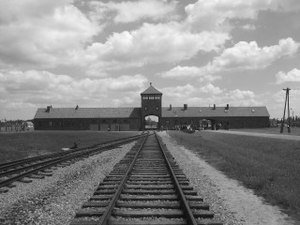 Entrance building of the Auschwitz-Birkenau concentration camp; View from inside the site (2004)

Extermination camps , also known as death camps or, colloquially emphatically, death factories , are a number of special concentration camps (KZ) that were set up by SS death-head associations in occupied Poland and Belarus during the Nazi era, specifically for the mass murder of Jews from all over Europe and others by the National Socialists persecuted groups of people were used.

From their establishment in 1941 to their liberation by the Red Army of the Soviet Union in 1944 and 1945, more than three million people were murdered in these extermination camps, mainly in gas chambers, in what was often referred to as industrial . In addition to the mass shootings by the special SS Einsatzgruppen, the extermination camps play a central role in the genocide of the Jews .

Differentiation from other concentration camps

In contrast to other concentration camps , where prisoners died, in addition to individual murders, primarily from systematically induced illness, malnutrition and excessive work, the " extermination through work ", the only purpose of the extermination camps was the immediate murder of those deported there , who were brought to the camps by special railroad trains were.

After a transport had reached the camp, the people who had arrived were usually murdered in the gas chambers regardless of age, gender or ability to work. Only from some transports was a small number of able-bodied people held back who were needed by the Nazi regime for certain functions in the camp, such as in the kitchen, as gravedigger, corpse burner and in sorting and repair operations.

The extermination camps listed here were founded as part of the so-called Aktion Reinhardt . These camps were located on the territory of the General Government of Poland and occupied Belarus and were formally operated under the responsibility of the respective Higher SS and Police Leader (HSSPF) .

Between the end of 1941 and July 1942, six large extermination camps were opened in the areas conquered by the Wehrmacht in the east . They emerged after the Wannsee Conference with the aim of “rationalizing” the large-scale mass murder of Jews and other “foreign races” as well as people identified as potential opponents of Nazi rule in the conquered areas of Eastern Europe, making it more or less industrial facilitate and speed up.

In particular, the "problems" associated with the shootings previously practiced - mainly by the Einsatzgruppen of the SS and SD - should be avoided:

The aim of the extermination camps was therefore the complete physical extermination of the victims, including all mortal remains, as well as isolation and shielding from society and the parts of the army and administration that were not directly assigned to them.

An important feature was the connection of the camps to the rail network of the Reichsbahn or the neighboring countries, so that the supply of previously arranged "transports" and thus a planned and economically rationalized mass killing - thus the extermination of European Jews, which the National Socialists called the "final solution" - be made possible.

The following eight facilities were operated as extermination camps in 1941/42 to carry out the mass murder of European Jews:

On Reich territory annexed in 1939

These imperial territories, which were occupied and illegally annexed in 1939, had belonged to the Polish Republic since the 1920s ; a consequence of the territorial changes after the First World War . The numbers refer to the commissioning dates.

In the territory of the General Government

The Generalgouvernement consisted mainly of parts of Poland occupied in 1939

In the district of the Reichskommissariat Ostland

The following camps, which were located in the Belarusian area of ​​the Reichskommissariat Ostland established by Germany on Soviet soil , are usually not (yet) counted among the extermination camps in international Holocaust research . Details came out late; most of the victims were shot and the number of victims is lower than in the aforementioned extermination camps - see the individual articles.

Three differently mechanized forms of mass murder were carried out in the extermination camps:

Starting in autumn 1941, three different central National Socialist authorities, the Reich Security Main Office, the Chancellery of the Führer, and the SS Economic and Administrative Main Office were charged with implementing the final solution to the Jewish question in the extermination camps:

Information and confrontation in post-war Germany

After the liberation of the concentration camp prisoners and their medical care, the Allies saw the need to confront the German population with the crimes committed under their eyes. The unbelievable crimes became visible in the concentration camps - even for people who had not already been eyewitnesses to the crimes. The local population in the vicinity of the concentration camps was forced to look at parts of the camp and the bodies of those murdered there. She was also forced to bury the dead in dignified graves at various camp locations. This involved unburied corpses or the reburial of corpses from mass graves. Several film documentaries and photo books were produced for screenings in occupied Germany and Austria. The first example is the film The Death Mills , in the original Death Mills . It consists mainly of film material that was shot in recently liberated concentration camps - including Auschwitz-Birkenau, Majdanek, Treblinka and Bergen-Belsen. The film is underlaid only with serious classical music and has no framework plot. He also goes into the economic exploitation of prisoners. Some of the documentation was also used as evidence for any legal proceedings against those involved, e.g. B. in the Nuremberg trials or in the Frankfurt Auschwitz trial .