The Belarusian SSR was first proclaimed on January 1, 1919. On February 27, 1919, it merged with Lithuania for a few months to form the Lithuanian-Belarusian SSR , which was broken up by Polish troops in July 1919 during the Polish-Soviet War .

In August 1920, a Belarusian SSR was re-established in Minsk, and in 1922 the BSSR became a union republic of the newly formed Soviet Union .

In 1924 and 1926 it was enlarged by some western Russian areas ( Mogiljow , Vitebsk , Gomel ) and in 1932 an autonomous district ( Dsjarshynsk ) was established for the Polish minority, but was dissolved again in 1935. Instead came in 1939, according to the Hitler-Stalin Pact , the former Polish territories of Belarus added (including district Białystok ), of which the Byelorussian SSR again in 1940 Vilna (Vilnius) to the Lithuanian SSR ceded .

After the German attack on the Soviet Union , the Soviet Republic was under German occupation from 1941 to 1944, which brought great suffering to the Belarusian population. Up to 2.5 million inhabitants of the union republic perished. Almost all cities and many villages in the country were destroyed in the summer of 1944 when the German occupiers withdrew. In recognition of its great victims in the war, the Belarusian SSR (like the Ukrainian SSR ) was admitted to the UN in 1945, alongside the Soviet Union, as a separate founding member and had its own vote in the General Assembly , which was cast in the bloc with the Soviet Union.

Since 1950 the BSSR has had its own coat of arms , which was used beyond its existence until 1995. Over the years, the flag of the BSSR has changed four times.

Since the end of 1991, Belarus has been an independent state after the collapse of the Soviet Union . 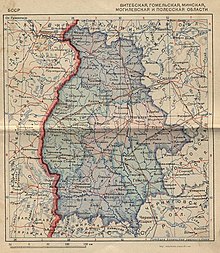 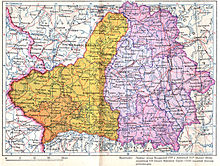 In the BSSR, founded in 1919, the multiethnic character of the population was taken into account through the introduction of four state languages: Belarusian, Yiddish , Russian and Polish.

According to the Soviet census of 1979, the population of the Belarusian SSR was essentially composed of the following ethnic groups:

Union Republics of the Soviet Union