This article deals with people belonging to the ethnic group of Russians , for more meanings see Russian .

The Russians ( Russian русские , German transcription russkije; historical German names including Großrussen , Reussen , Muscovites etc. ) are an East Slavic people with around 137 million members, of which around 115 million in Russia , around 17 million in the other subsequent states of the Soviet Union and around six million in other states. They form the largest ethnic group in Europe . The national language of Russians is Russian , the predominant and traditional religion is Russian Orthodox Christianity .

In German, the term Russen is used not only for ethnic Russians, but can also refer to all citizens of the Russian Federation regardless of ethnicity. In Russian, on the other hand, russkij means primarily ethnic Russians. The nationality, on the other hand, describes the adjective rossijskij (российский), which is derived from Rossija (Россия = Russia). A Russian citizen of any ethnicity is called accordingly rossijanin (россиянин), plural rossijane (россияне), which could be translated as Russian .

A Russian woman from the Arkhangelsk region in national dress, photo around 1900

The ancestors of the Russians were East Slavic tribes who inhabited the forest areas of today's west of Russia , Belarus and Ukraine . Above all, they included the Ilmenslawen , the Kriwitschen , the Vjatitschen , the Severjanen and the Radimitschen . Scandinavian ( Rus ), Baltic ( Goljad ) and Finno-Ugric ( Merja , Muroma , Meschtscheren, etc.) tribes were also involved in the ethnogenesis of the Russians . According to a theory, the underlying ethnonym Rus originally referred to the Varangians from Scandinavia , who initially represented the upper class of the Kievan Rus , the first state structure in the region (cf. Finnish "Ruotsi" = "Sweden") and later applied to the entire population of the empire transferred, especially since the Scandinavians experienced a cultural Slavicization fairly quickly.

According to a widespread theory, a comparatively homogeneous Old Russian ethnic group developed in the Kievan Rus between the 10th and the 13th centuries , from which the (Great) Russians, the Ukrainians, in a long process of differentiation in the centuries after the collapse of the Kievan Rus (Little Russians) and the Belarusians emerged . The Russian historian Boris Florja sees the different national affiliations as the basis for this. He sees an ethnic-cultural separation between the Russians in the sphere of influence of the Grand Duchy of Moscow and the other Eastern Slavs (Ruthenians) in the Union of the Grand Duchy of Lithuania , especially in the course of the 16th century against the background of the numerous Russian-Lithuanian wars . The separation of the Ukrainians and Belarusians took place in the 17th century along the Polish-Lithuanian border within Poland-Lithuania .

The Great Russians initially inhabited the area that comprised the northwest of what is now Russia. With the military successes against the Tatars , their settlement area spread south along the Volga . The conquest of the Tatar capital Kazan in 1552 opened the way for the Russians via the Urals to Siberia , which they then began to develop. The Russians first came to the Pacific in the 17th century. The Russian Cossacks and the North Russian Pomors played an important role in the colonization of new areas . From the 18th century, after the Ottomans and Crimean Tatars were pushed back, the Russian settlement area expanded into southern Ukraine ( New Russia ) and the North Caucasus . Until the October Revolution of 1917, the Russians lived almost exclusively on the territory of the Russian Empire . That changed after the Bolsheviks came to power , which forced many noble and middle-class families to emigrate, creating a worldwide diaspora .

During the time of the Soviet Union , Russian minorities emerged in almost all of the republics. While this was due to a forced settlement policy of the state in the Baltic States , in Central Asia or the South Caucasus there was more of a natural need for qualified skilled workers to build infrastructure, industry or educational institutions, which was mainly met by Russians. Since the dissolution of the Soviet Union , however, there have been movements back to the Russian Federation.

Russian , a language developed from Old East Slavonic , is the official language in Russia and is understood by 99% of the population. Furthermore, Russian is considered a world language because of its 130 million native speakers and 110 million second speakers .

The formation of modern Russian surnames took place between the 16th and 17th centuries. The typical endings were the genitive endings -ow, -ew and -in , which today have around 2/3 of the Russian surnames. Most of the time, the genitive was formed from first names, animal names or professions. Seldom endings of names were -ski (adjective; related either to the geographical origin or was imported by immigrants from the Polish-Lithuanian imperial territory), -ych (plural genitive, especially in the Urals ), -itsch , -ez , -ak , -ago . In more recent times names on -enko and -uk came from the Ukrainian area .

Since the genitive in Russian is declined depending on the gender , female surnames have an additional a appended to the endings -ow , -ew and -in . The adjective ending -ski changes to -skaja . All other surnames are not declined.

The Russians are traditionally Orthodox Christians . In the more than 70 years of official atheism in the former Soviet Union , however, a large proportion of Russians have become estranged from religion, although the Russian Orthodox Church has been gaining in importance again since the collapse of the Soviet Union in 1991. Approx. 60% of Russians are baptized. Although the membership of church communities is increasing, the number of visitors to the Sunday liturgy remains quite low. Today there are over 12,000 Russian Orthodox and 285 Old Orthodox parishes in Russia . The Orthodox religion is an integral part of Russian cultural identity, so it is normal for atheist Russians to identify with the Orthodox Church as well.

There are currently around 190,000 baptized Russian Orthodox Christians living in Germany, who are organized in 60 parishes.

The Russians have also reached other religious communities, for example 85,000 Russians are Evangelical Baptists . The Russians mostly got to know this faith through contact with Russian Germans, most of whom profess evangelical beliefs. Another minority are the Russian Catholics who belong to the Russian Greek Catholic Church , which is subordinate to the Vatican. However, this is very small and has about 3,500 believers. Catholic missionaries are viewed with skepticism by the Moscow Orthodox Patriarchate.

Slavic paganism , a pre-Christian religion , is also enjoying new popularity . There are temples and sacred groves mainly in the Elbe and Baltic Slavic regions .

The Russians living on the coast of the White Sea have always been called Pomors , they are the descendants of the ancient Novgorodians and have their own cultural features in costume, folklore and pronunciation. The descendants of the Russian Old Believers , the Lipovans, live in the Danube Delta . Another Russian sub-group can be counted the Don and the Kuban Cossacks . Often the Siberian Russians also point to their certain cultural independence.

Distribution of Russians in different countries

Russians in the successor states of the Soviet Union

Russians in the successor states of the Soviet Union 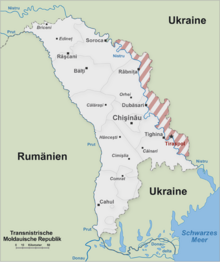 Residents of Estonia and Latvia who only came to these countries during the Soviet era and who did not opt ​​for citizenship of the CIS states after regaining independence have the option of obtaining citizenship of Estonia or Latvia through naturalization. Knowledge of the Estonian or Latvian language and history of the country is required .

Since 1992, over 150,000 residents of Estonia have received Estonian citizenship, most of them ethnic Russians. In December 2011, 6.9% of Estonia's resident population (94,654 people) were still without citizenship. They do, however, enjoy the right to vote in local elections and have permanent residence rights. Stateless children born in Estonia after February 26, 1992 automatically acquire Estonian citizenship under certain conditions.

In Latvia there have been almost 100,000 naturalizations since 1995 compared to a good 400,000 “non-citizens” - 17% of the Latvian population. In Latvia in particular, there were protests by ethnic Russians against the teaching of Latvian and the closings of Russian-speaking schools. About half of the Russian minority in Latvia speaks only Russian. The Russians in the Baltic states are among the largest European minorities whose language has no official status.

Russians in other countries in the world 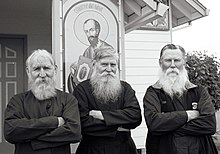 It is estimated that 5.1–6 million US residents are of Russian descent. Of particular note here is Alaska , which was originally part of the Russian Empire until it was sold to the United States in 1867. At the time of the colony's heyday, 40,000 Russians lived in Alaska, mostly in the Aleutian Islands . There is still a small Orthodox minority here. However, according to the 2000 census, only 1,706,242 Americans name Russian as their everyday language. Larger groups of Russian-Americans live in New York, Los Angeles, Chicago, Philadelphia, San Francisco, and Boston. About 20% of Russian-speaking Americans are Jews. About 80% of Russian-speaking Americans were not born in the United States. It is estimated that between 1990 and 2000 more than half a million immigrants from successor states of the Soviet Union settled in the USA. 2.6 million Russians lived in the United States in 2000.

More than a million Jewish immigrants came to Israel from the former Soviet Union, more than 750,000 of them in the period from 1989 to 1999 alone. Today it is believed that around one million Israelis speak Russian. The extent to which they can be called Russians is a matter of opinion. In the Soviet Union and its successor states, Jews are counted as a separate ethnic group, although the vast majority speak Russian as their mother tongue.

The Russian-speaking Lipovans live in Romania .

In the People's Republic of China , the Russians (俄罗斯 族) are recognized as an official minority that has existed there for generations. Here they live in northern Xinjiang , Inner Mongolia and Heilongjiang . Since the end of the Soviet Union, there have been major immigration movements again, both from Russians to China and from Chinese to Russia.