This article describes a group of islands. For the indigenous people of these islands, also known as Aleutians, see Aleuts (people) .

In addition, the subduction of the Pacific plate is the cause of high seismic activity , with a probability of occurrence of an earthquake with a magnitude of 7.0 ( M S ) per year and a maximum magnitude of 8.9 (peak value in the circumpacific region). The epicentres of shallow crustal earthquakes lie between the Aleutian Trench and the islands, those of earthquakes in medium crustal depth lie on the central axis of the island arc, deep-center earthquakes do not occur there. Two more severe earthquakes in 1946 (epicenter off Unimak Island , M S  around 7.4) and 1957 (epicenter off Andreanof Islands , M S  8.25) triggered destructive tsunamis that spread in the North Pacific. The 1946 tsunami was responsible for the almost complete destruction of the port city of Hilo in Hawaii .

Mostly for the US state of Alaska belonging archipelago extends arcuately on the southern edge of the North Pacific Bering Sea from Alaska Peninsula over some 1,750 kilometers in length towards the west to the Russian Commander Islands , representing the western slopes of the island chain and geologically one with the other Aleutian Islands Form unity. The commander islands are around 335 kilometers from Attu , the westernmost US Aleutian island. Together they represent the natural demarcation from the actual North Pacific .

Most of the islands belong to the United States, only the westernmost group, the Commander Islands (Komandorskiye ostrova), belong to Russia. The US-American part is divided into the district of Aleutians East Borough (total area 38,880 km², land area 18,099 km²), which also includes the western part of the Alaska Peninsula , and the Aleutians West Census Area (total area 36,562 km², land area 11,388 km²), and has around 8,200 inhabitants (mostly fishermen and fur hunters) who live in seclusion in eleven communities on only seven islands. The main island is Unalaska with the main town and naval base Dutch Harbor . The Russian Komandorsky Islands form the Aleutian district of the Kamchatka region and have about 600 inhabitants.

The very mountainous chain of islands (up to 2,861 meters high), which has only very sparse vegetation, is of volcanic origin and belongs to the northern part of the Pacific Ring of Fire . Some of the 80 or so volcanoes are still active today. In the north the terrain drops quite steeply into the up to 4,096 meter deep sea basin of the Bering Sea, in the south the up to 7,822 meter deep Aleutian Trench joins the actual Pacific Ocean .

Although the islands are roughly at the same latitude as northern Germany, they belong to the subarctic climate zone . The Kuroshio ocean current, which travels along the east coast of Japan from the south , brings in large amounts of heat. It thus plays a similar role for the Aleutians as the Gulf Stream does for Western Europe.

There is a rough, sunless and very humid climate. The amount of precipitation on the islands is between 500 and 2000 mm per year, there are between 120 and 250 rainy days.

While in winter the daily average temperatures are between −5 and +2 ° C, temperatures of 10 to 13 ° C are measured in summer.

The vegetation of the Aleutian Islands and the offshore headland of southern Alaskan is often referred to as tundra , although this is incorrect due to the lack of permafrost. They are treeless, subpolar meadows and heaths with a tundra-like character.

The sparse vegetation with long snow cover allows only a few rodents , such as a spotted marmot , arctic fox and, on land birds, sparrowhawks , finches , for example black-fronted snow bulls , and snipe birds . In contrast, the number of aquatic animals such as whales , seals , sea ​​lions and sea ​​otters is rich . The Steller's manatee , which was exterminated in the 18th century, and the Aleutian seal also lived here. Among the water birds are several species of geese and ducks, albatross and cormorant .

The aquatic animals and birds formed the food and clothing basis for human settlement by the Aleutians , who called themselves Unangan or Unungun , that is, humans. Later, the abundance of animals was the reason for the suppression and persecution of the Aleutians by Russian and later American fur hunters.

The oldest stone tools and remains of sunken huts come from people of the Epi gravettian culture type from around 7,000 BC. A second settlement of the archipelago with the very harsh living conditions for humans did not take place again until 3,000 BC. Instead of. The people genetically belonging to the Northeast Asian population came in seaworthy boats and Stone Age hunting weapons, including a type of rod harpoons with long, narrow bone tips and barbs, such as those found in Kamchatka , Kodiak Island and northern Japan . From 1,000 AD onwards, people with short-noses with unexplained origins and the same way of life can be found (see also Aleutians (people) ).

Port of Unalaska painted in the summer of 1816 by Ludwig Choris during the Rurik expedition .

The Aleutians were discovered by Vitus Bering during a Russian expedition in 1741 and sold to the USA along with Alaska in 1867. They were inhabited by Asian fur hunters and traders in the 18th and 19th centuries. The descendants of the pre-colonial Aleutian population are also called Aleutian or Unangan .

During the Second World War , the islands of Kiska and Attu , which were fiercely contested, were occupied by the Japanese army in the battle for the Aleutians from June 6, 1942 to August 15, 1943 . The US-Americans refer to the costly battles for the islands as The Forgotten War . The inhabitants of the Aleutian Islands, who were brought to southern parts of the US during the war, were only allowed to return some time after the war ended. 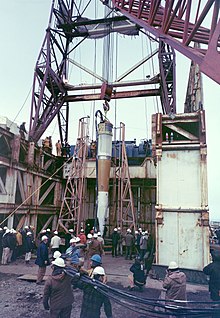 In September 1971 a small group of peace activists from the “Don't Make a Wave Committee” protested with Phyllis Cormack near the Aleutian island of Amchitka . With their non-violent protest, the group tried to prevent the US cannikin nuclear test from Operation Grommet . The bomb was detonated underground. Although the group failed to prevent the test, it sparked a wave of public outrage. This action is considered to be the birth of Greenpeace .

Archipelagos of the Aleutian Islands