This article covers the marginal sea between North America and Siberia, also known as the Bering Sea; For the band project of the same name from Weimar, see Beringsee (band) . 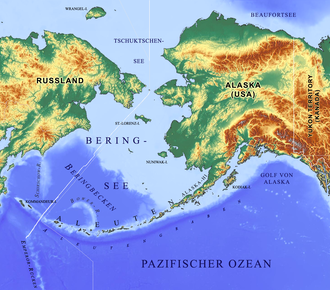 The Bering Sea or the Bering Sea is a marginal sea with an average depth of around 1,600 meters at the northern end of the Pacific Ocean between North America and Northeast Asia .

The relatively shallow sea lies between the west coast of Alaska ( USA ) and the east coast of Siberia ( Russia ). In the north, the Bering Sea is connected to the Arctic Ocean by the Bering Strait . In the south it is demarcated from the Pacific by the Alëuten island chain (USA) and the commanding islands (Russia) adjoining it to the west . In the west, the Bering Sea also borders the northern part of the Kamchatka Peninsula .

While the above-mentioned islands of the Alëuten-Kommandeur- Inselbogen form the southern end of the marginal sea, on the continental shelf that connects the two continents in the Bering Sea underwater lie the island of Nunivak , the Pribilof Islands , the St. Lawrence Island , the St. Matthew Island (all USA) and Karagin Island (Russia). In the middle of the Bering Strait are the two Diomedes Islands , between which the US-Russia state border and the date line run. The area occupied by the Bering Sea is around 2.3 million km². Its deepest regions are in the southwestern part, in the so-called Bering Basin. The deepest point is 4097 m, 4773 m, 5121 m or 5500 m below sea level, depending on the source. Because of the warm Alaska Current (8 to 11 ° C), the northern part also remains ice-free from July to September.

Shallow sea as a tidal brake

The Bering Sea is the largest flat sea on earth in terms of area. Due to the low depth - half of the ocean basin has a sea depth below 100 meters - have the tide here a certain braking effect on the Earth's rotation . The circulation of the water extends over large areas almost to the sea floor, so that the Bering Sea accounts for most of the total tidal friction on our planet. As a result, the earth's rotation slows down by two milliseconds every century.

Around 10,000 years ago, when the last ice age came to an end and the sea level was around 125 m lower than today, there was a land bridge at the northern end of the Bering Sea in the area of ​​today's Bering Strait , which connected Asia and America. According to current doctrines, the first people to North America came via this connection called Beringia .

The Bering Sea was discovered by Semjon Deschnjow in 1648 from the perspective of the European cultural area . It is named after the Danish naturalist and captain Vitus Bering , who was the first to sail the waters on behalf of Tsar Peter the Great in 1741 to find out whether there is a connection from Asia to America.

In the second half of the 19th century after the United States in addition to the Pribilof Islands and the core area of today's state of Alaska in 1867 for sale were purchased from Russia, there were disputes between the US and the UK about hunting rights in the Bering Sea. In the treaties with the aforementioned states, Russia had stipulated that it only regarded its coastal strip as national territory. The US saw the opportunity to incorporate the Bering Sea into its territory and began to keep British and Canadian fishing vessels and seal hunters out.

The United Kingdom protested, which led to negotiations with international legal entities. The court met in Paris in 1892 and announced its verdict on August 15: It was decided that the United States was entitled to the three-mile zone alone. In addition, that was seal hunting restricted to the open sea. From then on, it was only allowed to take place between May 1st and July 31st.