This article describes land bridges in geography. For the term of the same name in geopolitics, see Landbrücke (geopolitics) . 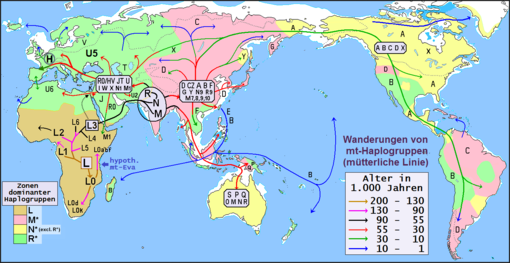 The spread of man from Asia to America via the Beringia land bridge . 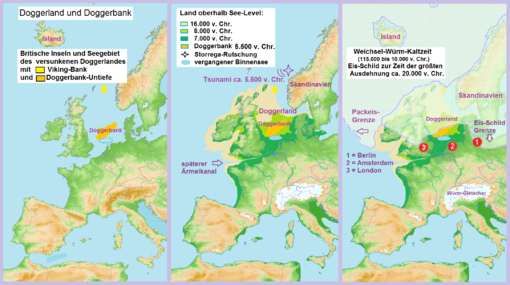 The land bridge between mainland Europe and Britain, Doggerland , was a passage and settlement area for Ice Age hunters and gatherers .

In geomorphology, a land bridge describes a strip of land that connects two land masses that are otherwise separated by seas. The narrowest point of a land bridge is called the isthmus . Land bridges are created by regression , by the sinking of the sea ​​level (e.g. during the last cold period ), by plate tectonics , or occasionally by postglacial land uplift . Land bridges can also disappear again, for example due to plate tectonic movements or the (re) rise of sea levels in a warm period .

To the land bridges include the existing sand dunes tomboli and by extension temporarily occurring strip of land to (semi) islands in lakes and rivers, and sand bars that fall dry at low tide. Humans have also created artificial land bridges, thus turning islands into peninsulas .

Land bridges are of particular importance in biogeography as they make it easier for animals and plants to colonize new areas (fauna and flora exchange).

In the 19th and 20th centuries, a large number of land bridge hypotheses were put forward to explain the widely spaced distribution areas of closely related organisms. Most of these hypotheses, however, became obsolete with the knowledge of plate tectonics and continental drift .