The title of this article is ambiguous. Further meanings are listed under Sandbank (disambiguation) . 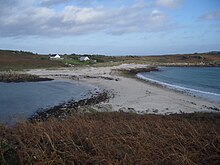 A beach wall between the Isles of Scilly St. Agnes and Gugh

A sandbar is a deposit ( sedimentation ) of sand or gravel at the bottom of seas and rivers , formed by the tide and current . A “free beach wall ” is created when an offshore sandbank rises above sea ​​level . The narrow passage between neighboring sandbanks is called a kille . When sandbanks grow, islands are created out of them . One example is the Kachelotplate in the East Frisian Wadden Sea between Borkum and Juist . Sandbanks that dry out every day are also known as plates or sand plates.

A good example of a free beach wall in Germany is the sandbank of the North Sea resort of Sankt Peter-Ording . Sandbanks can migrate due to the influence of currents and therefore pose a risk to shipping . An example of a “wandering” sandbank is Blauort off the coast of Büsum , another is the Noorderhaaks off Den Helder in the Netherlands . Sandbanks pose an even greater danger if they consist of particularly fine sand - called grinding sand in the sailor's language - which holds in place ships that have run aground and usually causes them to break through. Such a sandbank is, for example, the Great Bird Sand north of the main channel of the Outer Elbe , where there are already several hundred wrecks.

Other well-known examples of dangerous sandbars are in the Strait of Dover , there near the English coast the Goodwin Sands and about in the middle of the eastern entrance of the Strait of Dover the Sandettie Bank . Such sandbanks are often secured with lightships to this day .

A description of the destructive effects of sandbanks on historic and modern ships can be found in the article Goodwin Sands , where it is estimated that around 2,000 ships were lost.