A special type of coat is called the current in animals, similar to that of tigers and zebra . The stripes are roughly vertical, but not as clearly set off as in the animals mentioned above, rather tone on tone.

"Showing individual horizontal stripes running into one another"

- Definition of brindle in Duden

This coloration with currents can be observed very often in dogs similar to mastiffs (e.g. boxers, bulldogs, mastiffs and mixed-breeds resulting from them). The gold / black brindle coloring is very common. Current also occurs in horses and is now also referred to as brindle.

Genetics of the current in the dog

In dogs, the flow is caused by the k br (brindle) allele of the K locus. The allele for Stromung k br is recessive compared to the allele K B , which produces the dominantly black coat color in dogs, but dominates over k y , which enables the production of pheomelanin. The K locus is on chromosome 16 in dogs. 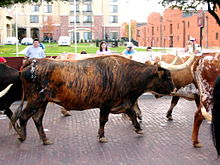 In domestic cats, the flow is coded by the tabby locus.