Kander gravel banks in the Gastern Valley in Switzerland 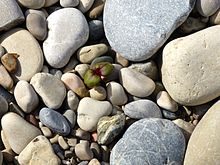 As gravel bars (also Heger or Haeger called) is called elongated at low water level falling surfaces dry in larger streams and rivers . The stones ( rubble , gravel ) and large amounts of sand carried along by the river are deposited in those parts of the river bed that are shallow and where there is little or no current .

Although gravel banks form on all rivers, which have sufficient flow speed to be able to transport sediment rich in coarse material, and which have fluctuating water levels over the course of the year, they are particularly typical for rivers with a branched channel shape , which is also called river rewilding . This forms when the gradient of the water and the bed load are high. If there is a slight gradient, it turns into meandering channels. When the water level is high, branched channels consist of a network of diverging and soon reuniting (“anastomosing”) partial waterways, which leave characteristically diamond-shaped “islands” free between them. When the water level drops, the shallower of these partial waters dry out and the "islands" become larger, until in extreme cases only one body of water remains. A wide, mostly vegetation-free flood bed (often with higher islands with tree vegetation) with a low water bed, which can be shifted in it after each major flood, is typical of branched channels. The high dynamics create a particularly large number of gravel banks.

The gravel banks are colloquially called islands , e.g. B. gravel islands. As in the case of sandbanks , however, this is scientifically incorrect.

Since the water level of almost all alpine rivers constantly changes in the decimeter range, freshly formed gravel banks are soon flooded again , partially eroded and transported to other parts of the river bed.

Gravel banks have a special meaning for geologists : for the former, they represent a rock collection that can hardly be surpassed in diversity , which provides quick information on the petrography of the entire catchment area and also allows the amount of average erosion to be estimated.

For the bird world and especially the waterfowl , the gravel / sand / gravel banks are treasure troves of a different kind: there are lots of small organisms in the pores, and the still loose sediment does not offer much resistance to a search.
For ornithology , on the other hand, the excrement of the birds piled up on gravel banks is an important indicator of the feeding and migration behavior of the bipedal visitors.

Gravel banks with little vegetation are also important breeding grounds for bird species, e.g. B. the little ringed plover ( Charadrius dubius ). Gravel banks, especially those in the Alpine rivers and the Upper Rhine, are also a habitat for specialized invertebrate species. The locusts are an example . The species threatened with extinction in Germany, the gravel bank grasshopper ( Chorthippus pullus ), Turk's thorn shrimp ( Tetrix tuerki ) and green wrecker ( Aiolopus thalassinus ) live exclusively or mainly on gravel banks.

In botany , the gravel banks of the Alpine rivers are known as advanced outposts for the occurrence of typical Alpine plants . It is believed that the seeds of these species are transported with the flowing water. The vegetation-free gravel banks correspond in many ways to the alpine habitats from which the species originate. In addition, there is no competition from other plants. Occurrences of such alpine floods are known in the Isar to Munich and in the Lech to the north of Augsburg .

While the grain sizes that occur on gravel banks range up to a maximum of about 10 cm in size pebbles , the heavier debris is deposited elsewhere because the flow must not fall below or exceed certain limit values for stones over about 1 kg . In the event of flooding , however, all of these formations shift over a large area.