Flood on the banks of the Rhine in Cologne, April 1983, Federal Archives 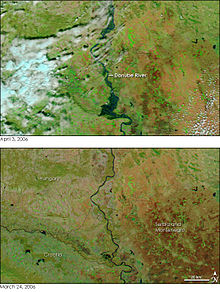 Flood (scientific / mathematical abbreviation HQ from " H och" and discharge - index Q ) is the condition of water bodies in which their water level is significantly above the level of their mean water . The counterpart is " low water ".

When using the term, a distinction must be made between the main cause of the water flowing in:

Depending on the tide

In seas and waters that are dependent on tides ("tides"), "high water" refers to the periodic entry of the highest water level after the high tide has entered (correctly referred to as rising water ) and before the transition to ebb (correctly referred to as running water ) (" apex ") ). High and low tides alternate every 6 to 6½ hours on average, caused by the gravitation of the sun and especially the moon . Particularly high tides at full or new moon are called “ spring tide ”, also “spring tide” or “spring high tide”. Normal floods can be intensified by wind ( drift current ) to form a storm surge that can penetrate for kilometers inland on a flat coast . In waters without noticeable tides, pure storm floods can occur.

In the case of rivers and smaller rivers , one speaks of flooding when their water level exceeds their normal level for a long time (several days). Depending on the type of catchment area , they usually have a seasonal increase, for example when the snow melts or after heavy summer rain . In the event of severe flooding, river navigation must first be stopped; if the water rises further, flooding can occur. Swelling torrents can carry away bridges and trigger mudslides or landslides . In the case of particularly rapid floods, one speaks of flash floods .

Passau during the floods in Central Europe in 2013

Sprawl on the Middle Elbe near Havelberg , June 2013 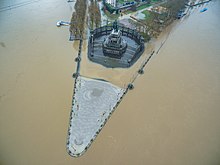 Flood at the Deutsches Eck in Koblenz in early January 2018

Basically, floods are part of natural occurrences. They become a catastrophe ( flood disaster ) when human values ​​are affected. A distinction can be made between regularly recurring floods, triggered for example by tides or snowmelt ( spring floods ), and irregular or one-off events such as tsunamis , storm surges and so-called " floods of the century " (as such, the Elbe floods in 2002 and the floods in Central Europe in 2013 ; some other floods that put this designation into perspective). Such particularly strong floods are referred to as “millennia floods” (e.g. Magdalenen floods in 1342 or Oder floods in 1997 ).

The contribution of global warming to flooding cannot be clearly identified and depends on local conditions (increase in extreme events, shift from snow to rain, etc.). For some regions an increase in annual precipitation is forecast, for others a decrease or a different distribution. Nevertheless, the IPCC assumes that flood risks will increase in the future.

Countries with low relief heights as the Netherlands , Germany (especially in the north) and Denmark to attempt by massive dikes measures and flood barriers (such as the Ems barrier in Emden ) to protect against sea flooding. If there is no intensive flood protection , catastrophes with many thousands of deaths can occur more frequently at the mouth of the Ganges, as in Bangladesh .

Flood situations also arise inland due to the swelling of rivers and lakes and the dangers of the torrent . Floods can also arise from ice jams or winds (e.g. Hamburg storm surge ).

The floods (peaks) of a river and a tributary can work together. Example: If a Moselle and a Rhine flood wave meet in Koblenz, the Rhine flood increases from there. When the Rhine floods at the end of 1993, floods from the Neckar, Main, Nahe and Moselle co-operated.

Bodenwerder when the Weser floods

In the course of advancing land use, the areas used that are exposed to the risk of flooding also grew. In some places this could or can be compensated by structural flood protection. Today, compared to previous centuries, floods are much rarer. Their effects are often felt to be catastrophic; floods also provide “telegenic” and “photogenic” images. In the 19th century floods were seen as less catastrophic than they are today, as the built-up areas were less, and floods were sometimes seen as weather events comparable to snow today; the painter Gustav Schönleber found this a "pleasant change".

Today, human land use ( surface sealing ) and the improper development of bodies of water (linear regulation, reduction of retention areas ) can exacerbate flood levels. The usual, carefully planned expansion of watercourses ensures lower flood levels (expansion of the drainage cross-section, see measures for flood protection below). In addition, existing regulations can lose their performance due to insufficient maintenance (e.g. due to vegetation, landings) if this reduces the cross-section of the discharge. Significant changes in runoff due to soil sealing are only to be expected in small catchment areas .

The flood risk can be described by four components / factors:

In war situations, deliberate flooding can be used as an offensive or defensive weapon against attackers. Among other things, this strategy has often brought success to the Netherlands against attackers. See: Eighty Years War , Alkmaar , Inundation . In 1943 the British Air Force destroyed some German dams . There were further attacks on dam walls on the Dnjeprostroj - and the Supung dam . In 1945 soldiers of the Wehrmacht opened the Rurtalsperre ; On February 10, 1945, they blew up the seals in the Kermeter tunnel at the Heimbach power station , whereupon the dam drained to the level of the Kermeter tunnel. They also blew up the closures of the bottom drain tunnels of the Schwammenauel dam ( Rursee ). Both of these together created weeks of flooding downstream, which silted up the floodplain and made it difficult for the Western Allies to advance. The Rur was transformed from a small river into a raging body of water; this delayed the start of Operation Grenade (transfer of the 9th US Army over the Rur).

From December 2, 1944, the Wehrmacht blew up dikes on the Lower Rhine to prevent the advancing Western Allies from crossing. The operation Veritable (8 to 21 February 1945) came by to a halt, especially since the winter of 1944-45 was very cold.

Dithmarschen in the Middle Ages : In February 1500, the Dithmarschers under Wulf Isebrand defeated a Danish-Schleswig-Holstein army under King Johann in the battle of Hemmingstedt. The invading Danish army consisted mainly of a specialized marching war infantry troops consisting of mercenaries assembled Black Guard , and some noble equestrian units, but was poorly managed. The peasants were able to destroy this army surprisingly. At first they avoided an open battle, opened the dikes in the marshland and let the advancing army fall into a wet trap on the narrow embankment of the road from Meldorf to Heide at Dusenddüwelswarft near Hemmingstedt.

Floods are mostly given a statistical evaluation. Long-term series of measurements at levels form the basis . The maximum annual values ​​are selected from these and the probabilities of exceedance are determined. Their reciprocal value is the annuality . These annualities designate the statistical return interval .

In rivers, a single level is not very meaningful for general conditions (it depends on the local shape of the river bed), which is why the flow rate at the level is calculated here , which is largely the same over the entire river section and can be added up over the respective river system .

This flow rate (or flow rate below a gauge point) is referred to in hydrography with “Q” (from Latin quantitas , amount ), the water level with “W”, flood with “H”, which is why flow parameters and thus for the Designation of the flood itself the notation "HQ" or "HW" naturalized on lakes and coasts. For example, “HQ100” or “HW100” (also HQ 100 notated) denotes a flood event that occurs every 100 years, a “flood of the century ”.

The typical reference values ​​on rivers are:

In the process, values ​​from the modeling (" precipitation-runoff ", "NA models") are increasingly displacing the measured values, since in the context of global warming it is no longer certain to what extent the known - and comparatively short - measurement intervals are meaningful, and the models can be easily adapted.

Older is a phenomenological classification based on the extent of the respective impact such as overflows, overflows of barrages or extent of flooding. Today, these flood warning levels are mostly linked to the discharge parameters (similar to the Beaufort scale for wind strengths , which is classified according to wind speeds):

A term “medium high water” for one of the levels is unusual there. 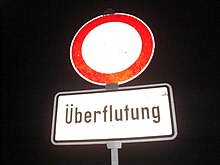 Flood protection measures can include the following aspects:

Flood management provides a comprehensive strategy for reducing the consequences of a flood .

With all flood protection measures, it should be noted that there is always a residual risk (system failure, exceeding the design flood ).

The following important information is missing from this article or section:
Flood protection in Switzerland, legal basis in Austria, USA flat-rate for Katrina consequences
Help Wikipedia by researching and pasting it .

Flood operation of the THW

The Water Management Act (WHG) has been defining floods for the first time since 2010 as: “a temporary flooding of land that is normally not covered with water” (Section 72 WHG) by surface waters (rivers, lakes, sea). In Germany, floods from sewage systems are expressly not defined as floods. Additional regulations can be found in some of the state water laws of the federal states. There is no legally stipulated level of protection.

The following protection goals are pursued in Austria:

Degrees of protection that go beyond this are strived for if there is a special need for protection (e.g. for the City of Vienna ).

The Ministry of the Environment has a flood simulation created by VRVis . It is based on a survey of the site and shows the risk of damage for objects in 3 categories. From autumn 2020, all municipalities are to be covered and available on the website hora.gv.at.

Different levels of protection are used in the Netherlands. While in some parts of the country there is a level of protection against an HQ 1,250, a large part of the Randstad , for example , is protected against an event that statistically occurs once every 10,000 years. While Rijkswaterstaat is responsible for national flood protection (i.e. for large waterways and coastal protection), the regional protection goals are pursued by the 26 Waterschappen (similar to the water associations in North Rhine-Westphalia).

In the USA , flood protection was set at the level of a 230-year flood by the responsible US Army Corps of Engineers . This level is also guaranteed, but the flooding of New Orleans has led to the realization that this level of protection is insufficient. 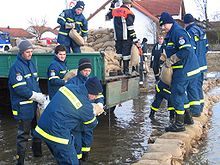 In order to assess the dangers associated with the floods both on the German coasts and on the rivers, the federal states have set up a flood portal on the Internet. There are different warning and alarm levels regionally and locally. The reporting systems are mostly computer-assisted and are able to provide flood forecasts or estimates for several hours in advance. Short-term weather changes mean that longer-term forecasts are subject to errors.

The disaster control falls under the responsibility of the respective interior authorities, which for rescue measures on the fire brigades , the THW , the Bundeswehr etc. a. To fall back on. Various water rescue organizations such as the DLRG and the water rescue service are currently working in Germany .

The local fire brigade provides immediate help and defense in the event of a flood . Long-term help is provided by the disaster relief service of the fire brigade and assistance operations by the armed forces .

Here, too, the most widely used flood protection aid is the sandbag .

The establishment, maintenance and operation of flood protection measures is carried out by those individually affected, water cooperatives , municipalities and water associations .