The title of this article is ambiguous. Further meanings are listed under Disaster (disambiguation) . 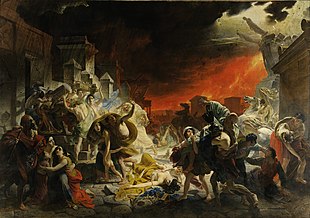 An ancient catastrophe in the reception of the first half of the 19th century: The last day of Pompeii , painting by Karl Pawlowitsch Brjullow , 1830–1833

The word actually means turn and specifically designates the turning point of the plot in the tragedy ; H. the point at which the hero's fate, luck or bad luck, is decided. From this developed the generalization of the term as a decisive event in the life of a person or a people, as an unfortunate natural event, etc.

In civil, population and disaster control, a disaster is a major hazard and danger situation or a damaging event . The former includes impending damage, the latter damage that has occurred.

The "turn" ( peripetia ) "for better or for worse" was a necessary dramaturgical trick of the plot in the ancient Greek drama , to make the protagonists - and with them the audience - either through a new "turn for the better" of a catharsis (purification) or, in the event of a “turn for the worse”, to be condemned for wrongdoing. As a result, the term is still ethical and transfigured in a socially romantic way, as well as being the subject of sensationalism. A sober definition of the term therefore presents certain difficulties. A technical definition that gives the criteria for establishing a disaster (classification as a disaster state ) is as follows:

"Disasters are events caused by elementary or technical processes or by people that endanger or damage to a large extent the life or health of people , the environment , property or the vital supplies of the population ."

Another way of looking at the definition further specifies the vague "large scope" through the ratio of the damage to the regional aid options:

"Disasters are [...] major loss events which [...] cannot be adequately dealt with by the authorities responsible for hazard prevention with their own resources and resources."

The Bavarian Disaster Protection Act of July 31, 1970 defined in Art. 1 BayKSG: "Disaster within the meaning of this law is such a serious common danger or emergency or such a serious accident that help and protection can only be effectively granted if the authorities appointed to do so, Departments and relief organizations work together under the uniform management of the disaster control authorities. "

Such definitions on the part of the legislature are the basis for the requirement of further aid measures, of a personal and technical nature as well as aid payments. In this sense, the term describes the local structures and powers are overwhelmed by the situation, and is of the order (of geography as of those affected) independent, so it can a single residential place or community well affect how an entire area or state . Typically, the disaster is detected within the boundaries of an administrative unit.

Disaster in the narrower sense is a longer-lasting and most large-scale damage location, with the normally reproached security ( fire brigade , ambulance service , police ) can not be met adequately and (only with a national (or international) aid and additional resources Military and non-organized Parts of the population) can be brought under control.

It is typical that the event (such as earthquake, flood, series of forest fires)

The telecommunication systems fail regularly; both due to overload and technical inability to function. Like landlines, cellular systems can be damaged, but they can also fail after some time in the event of a power failure ( battery backup ).

On the other hand, after a start-up phase lasting several hours, large-scale neighborhood help from unaffected areas and alarming background services (off-duty shifts, volunteer fire brigades , aid organizations such as the Red Cross, their rapid response groups and, in Germany, the THW , for example by declaring a state of emergency ), the acute dangers can be resolved within a day are essentially eliminated, in the narrower sense one speaks only of a “mass accident”, a “major loss event” or “ mass casualty of injuries of level 1 or 2”. As a rule, local events are not classified as catastrophes because, on the one hand, the extent of damage remains limited and, on the other hand, enough freelance workers can be brought in from the surrounding area.

The acute phase is the one in which there are still dangers to people (injuries that have not been taken care of, but also hunger, epidemics, cold), fires burn uncontrollably or the water does not yet sink. On the other hand, clearing-up work, recovery and reconstruction in the case of makeshift accommodation and care for affected people are no longer part of the disaster situation.

Interpol uses the following definition of a disaster from a police point of view (with a focus on identifying affected persons and those killed):

“A disaster is an unexpected event that kills or injures large numbers of people. The events that can lead to disasters are diverse. Operations after traffic accidents, natural disasters, technical accidents (fire, explosions), terrorist attacks and warlike events are therefore conceivable. A distinction must be made between an open and a closed form of disaster.
An "open catastrophe" is a major catastrophe in which a group of unknown people has been killed who has no prior record or affiliation. In these events it is difficult to get information on the number of victims.
A "closed catastrophe" is a major loss event in which a group of people belonging to a fixed collective (e.g. plane crash with a passenger list) was killed. If it is a closed catastrophe, the antemortal comparison data are i. d. Usually to raise faster. Mixed forms are also conceivable (crash of an airplane into a residential area). "

A distinction is often made between, depending on the cause

Natural disasters are natural events to which people are exposed and which lead to suffocation, drowning, dying of thirst, starvation, freezing to death, burning and similar serious physical impairments (e.g. illnesses, chemical burns) (such as meteor strikes, volcanic eruptions , avalanches , earthquakes and seaquakes , Floods , forest fires, etc.) The effects of natural disasters through to climatic disasters are usually also socially or culturally influenced (so-called man made disasters  - see famine ). B. If people had not settled volcanic slopes, an eruption would often not be a "catastrophe".
Technical catastrophes are triggered by a failure (this also includes incorrect operation) of a technical facility. Those “technical disasters” that cause devastating ecological damage are also referred to as environmental disasters . Disasters in traffic on water, land and in the air are often technical disasters; they are here under other categories, e.g. B. bridge collapses or fire and explosion disasters to find.

Disaster management should ensure that an appropriate response can be made in an emergency.

It generally consists of:

Research on disaster management and the economic significance of disasters is rare but well established at universities. Lars Michael Clausen introduced the sociology of disasters in Germany. His student Martin Voss founded a disaster research center at the Free University of Berlin. The Kiel Institute for Crisis Research (Crisis Navigator) conducts research on economic and social science aspects. The German Society for Crisis Management e. V. (DGfKM) is the professional association of crisis and disaster managers.

International disaster management in conflicts to coordinate military and civil structures for the protection of cultural assets is operated by the International Committee of the Blue Shield (Blue Shield International). This also applies to the survey of cultural assets to be protected, the creation of “no-strike lists” (which contain the coordinates of significant cultural monuments), the linking of civil and military structures and the training of local military personnel. Basically, in the event of disasters with regard to cultural property carriers, local alliances, ideally mediated or organized by Blue Shield, should achieve rapid damage limitation, including help from accessible third countries. There are also joint preventive projects between cultural property holders, museums , libraries and archives on the one hand, and the local Blue Shield organizations on the other. But only if the local population is involved can disaster control be implemented effectively on site. Karl von Habsburg , President of Blue Shield International , summed this up with the words “Without the local community and without the local participants, that would be completely impossible”.

The role of the media

Reporting and commenting on disasters plays a significant role in the mass media . Disasters are a key news item under the heading of damage and traditionally belong to the topics that the media primarily pay attention to and that arouse great interest among the public . The communication studies considered in this research field for a long time very strong.