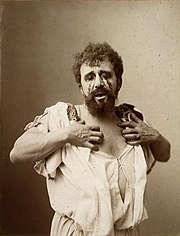 “Tragic” end of King Oedipus in the tragedy of Sophocles : Oedipus becomes aware of his guilt and stabs his eyes out

The tragedy is a form of drama and adjacent to the comedy the most important representative of this genre. It can be traced back to ancient Greece .

The main character's fateful conflict is characteristic of the tragedy. Your situation worsens from the point the disaster strikes. In this case, the word disaster only means the inevitable deterioration for the tragic hero . However, this deterioration does not necessarily mean the death of the protagonist.

The hero's failure is inevitable in tragedy; the cause lies in the constellation and character of the figure. The germ of tragedy is that man succumbs to hubris and tries to escape his predetermined fate through his actions.

The word "tragedy" comes from the theater of ancient Greece and describes a " goat song " or "song for the goat price" ( Greek τραγωδία, tragodía ). In the Dionysus cult , a " Komos " ( ancient Greek κῶμος kōmos ) was organized, a festive street parade or a procession with singing, disguised with a mask and goat's skin ( Greek τράγος / tragos ), to represent the god himself or the satyrs accompanying him . The form of the tragedy developed from a myth sung in the choir , the poetry of a mostly heroic past. The choral parts of the surviving dramas are rudiments of this original form, the dialogue and the plot represented are later developments, secondary from a historical perspective. The carrier of the action in the drama was originally a single actor, a speaker who could represent several characters by taking over their speeches. Only Aeschylus introduced a second actor. The choir song developed its own choral lyric, special forms with their own names, hymn , paian , dithyramb , epinikion , epithalamium , and others emerged.

In the context of tragedy, however, “tragic”, in contrast to everyday language, does not mean that something is very sad, but that someone from a high position becomes “guiltlessly guilty” and thus experiences a fall over a large “ height of fall ” (→ class clause ), like for example Oedipus , Orestes , Hamlet or Maria Stuart .

For Hegel, it is not the tragic hero but the tragic collision that is at the center of the tragedy. For him, the conflict is "not between good and evil, but between one-sided positions, each of which contains something good".

With recourse to Franz Rosenzweig and Georg Lukács, Walter Benjamin differentiates the tradition of the Christian tragedy from the Greek tragedy and thus criticizes the idea of ​​a historical continuity of the myths in Wagner and Nietzsche.

It is important that Walter Benjamin does not equate tragedy with tragedy. According to Aristotle, tragedy is "the imitation of a good, self-contained plot with good language and variety in the story". Here she uses mythological figures. The tragedy, however, makes use of historical figures.

Effect on the viewer

A central definition element of the genre tragedy is the effect on the viewer. This is where the many theories about tragedy differ. It is a problem of translation and interpretation of the three terms eleos , phobos and catharsis from Aristotle's poetics. In a recent translation, Aristotle defines tragedy as follows:

“Tragedy is an imitation of a good and self-contained action of a certain size, in attractively formed language, whereby these formative means are used differently in the individual sections. Imitation of doers and not by report, which causes misery (eleos) and shudder (phobos) and thereby causes a purification of such states of excitement. "

However, the terms eleos and phobos have long been translated as 'pity' and 'horror'. In Gottsched's Poetics, these two translations were expanded to include the term 'admiration', which he had adopted from Corneille . During the Enlightenment, Lessing vehemently opposed this interpretation and again banned the concept of amazement , which Aristotle did not use . In addition, the translation of phobos did not fit into his conception of tragedy, which is why he reinterpreted the word:

“The word that Aristotle uses is fear; Pity and fear, he says, should arouse tragedy. "

Lessing's translation was retained for a long time, but in some cases sharply criticized by recent research, so that Manfred Fuhrmann eleos and phobos translates the terms as 'woe' and 'shudder'.

The term catharsis is even more problematic. Even with Aristotle it is not entirely clear how he means the genitive, which refers to purification. So we are finally dealing with three genitives that can be chosen:

a . the reduction of overly passionate sensations to a healthy average,
b . the hardening against the passions,
c . liberation from passions in the sense of a pleasurable relief).

In practice, the feelings of the spectator of a tragedy are often drawn back and forth by a cleverly designed interplay of events between sympathy with the hero, the horror of the approaching, irreversible end and the repeatedly stimulated hope for a more favorable outcome. In order to create this rollercoaster of emotions, the authors use certain aids.

One of these tools is to add a comic scene immediately before an important event to relieve the tension ( comic relief ). Examples of this are the appearance of the corpse watcher in Sophocles' Antigone or the sleepless gatekeeper in William Shakespeare's Macbeth .

Often at the beginning of the game one hears the announcement that the “hero” will die. This increases the moral effect on the viewer, because the announcement is made seriously and credibly, but the other circumstances of the scene move the viewer to deceive himself and to dismiss the prediction as nonsensical. In the prologue of Shakespeare's Romeo and Juliet , for example, it is already announced that the lovers will die, but this does not detract from the tension and drama of the play.

The tragedy has its origins in Greece and lived there from 490 to 406 BC. Their heyday. The most important tragedy poets of antiquity were the Greeks Aeschylus (525–456 BC), Sophocles (496–406 BC) and Euripides (480–406 BC). In The Birth of Tragedy from the Spirit of Music , Friedrich Nietzsche takes the view that the tragedy emerged from the ritual choral dance of the Dionysus cult and was destroyed by the critical Socratic spirit after the death of Sophocles and Euripides .

The Roman tragedy was greatly influenced by the great Greek tragedy poets. Its most important representatives were Quintus Ennius (239–169 BC) and Lucius Accius (170–90 / 80 BC), of which only fragments have survived, and later Lucius Annaeus Seneca (4 BC – 65 A.D.).

The genre of tragedy played a very important role in French classical literature of the 17th and early 18th centuries. Your most important authors were Pierre Corneille , Jean Racine and Voltaire . According to the practice established by them, a tragedy had to be played out in princely circles and the three units of time, place and action had to be observed. The materials came predominantly from ancient Greek and Roman history as well as from mythology. Meter was usually the Alexandrian rhyming in pairs with " alternance " ie regular alternation of male and female rhymes.

In the course of the emancipation movement of the 18th century, the bourgeois tragedy was created , which moved away from the compulsion for noble main characters and made tragedy accessible to the bourgeoisie . When the idea that only the nobility had the ability to experience tragic was rejected, new topics such as the conflict between the nobility and the bourgeoisie (Friedrich Schiller, Kabale and Liebe ) or conflicts within the class ( Friedrich Hebbel , Maria Magdalena or Goethe's) opened up Faust. A tragedy ).