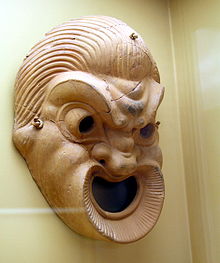 The Greek tragedy (from ancient Greek τράγος tragos "buck" and ᾠδή ōdē "song") was created during the official celebrations in Athens in honor of the wine god Dionysus . The tyrant Peisistratos (around 600-528 / 527 BC) elevated the cult of Dionysos to the state cult of Athens and introduced the annual Great Dionysia as a festival lasting several days. In 534 BC The poet Thespis performed the first tragedy by giving the singing and dancing choir of the already in the 7th century BC. BC incurred. Dithyrambos first time faced a single actor. Aeschylus introduced the second actor to the tragedy, the third Sophocles , if not already Aeschylus. The connection with the myths about the god Dionysus was soon abandoned, but mythical topics remained binding and were only ignored in exceptional cases.

The Greek tragedy had its heyday between 490 and 406 BC. The most famous tragedy poets were Aeschylus, Sophocles and Euripides . The most important ancient communications about Attic tragedy are contained in Aristotle 's treatise entitled Poetics .

The Greek tragedy deals with the fateful entanglement of the protagonist , who has gotten into such a hopeless situation that he can only be guilty of anything. The approaching catastrophe, which is becoming more and more apparent, can no longer be averted despite the great efforts of the people involved. The tragic character is also described with the attribute "guiltlessly guilty". The topics covered range from philosophical to religious and existential issues such as:

Fate or the gods bring the actor into an indissoluble situation, the conflict typical of Greek tragedy , which results in the internal and external collapse of a person. There is no way not to get guilty without giving up your values ​​(which a tragic actor cannot do). A good example is King Oedipus of Sophocles .

The actions are structured in such a way that they follow the law of the three units , namely the unity of place, time and action. This means that the action shown is linear, the time shown is identical to the duration of the performance and the action - with very few exceptions - takes place in the same location.

The structure follows the basic scheme:

This basic structure could not be changed. A fixed convention was the alternation between choirs (song verse) and the mono and dialogues of the actors (play verse). Due to the linear course of action, flashbacks were not possible, but what had already happened had to be brought to the attention of others. This also applied to parallel plots or important events that were presented to the audience because of the nature of the plot - for example fight scenes - or because of ethical conventions - e.g. B. the killing of a person was not shown - not shown directly. The means available for this were pondoscopy (wall exhibition), the messenger report , the deus ex machina or the ekkyklema .

But not only the strict structure of the tragedy had to be adhered to, the following conventions also had to be observed:

Only fragments of the accompanying music have survived.

According to Aristotle, the aim of a tragedy was the viewer's change of heart: this should lead to a “cleansing” ( catharsis ) of certain feelings. By experiencing misery / emotion and horror / shudder (from Greek éleos and phóbos, translated somewhat misleadingly by Lessing as pity and fear), the viewer of the tragedy experiences a purification of his soul from these states of excitement.