Aeschylus is a redirect to this article. For the asteroid named after him see (2876) Aeschylus .

Aeschylus ( Greek Αἰσχύλος Aeschylus , German pronunciation [ 'aɪ̯sçʏlɔs ], classic debate [ ai̯skʰýlos ], Latinized Aeschylus ; * 525 BC.. In Eleusis , Attica , † 456 BC.. In Gela , Sicily) is in front of Sophocles and Euripides the oldest of the three great poets of Greek tragedy . Of the seven pieces he has survived, the Persians and the Oresty in particular are played around the world.

Aeschylus, the son of Euphorion, came from an old noble family. As a young man, with the overthrow of the sons of Peisistratos , he experienced the end of tyranny and the democratic reforms of Kleisthenes of Athens . He got enthusiastic about the dramas of Choirilos and Pratinas at an early age . According to legend, he was ordained a poet by Dionysus himself in a dream. He took part in his early plays as an actor. At the age of 25, he first applied for the prize of the Agon of Dionysia , the poetry competition of the city of Athens , in which he was defeated.

As a soldier he took part in 490 BC. For Athens he took part in the battle at Marathon against the Persians , in which his brother Kynaigeiros was killed. After the destruction of Athens in 480 BC. He was involved in the sea ​​battle of Salamis on one of the Greek warships .

He made several trips to Sicily, including 475 BC. At the invitation of the local tyrant Hieron I of Syracuse , where he met the poets Simonides , Pindar and Bakchylides . For Hieron he wrote the festival The Etneans .

In 472 BC He won the victory prize with the world premiere of the drama The Persians , which is a dramatized version of his war experiences. In the competition with Sophocles he was defeated in 468 BC. BC, but he could win a total of 13 victories at the Dionysia.

He never returned from his last trip to Sicily. He died in 456 BC In Gela , where he was buried. According to legend, he had retired to the fields there because an oracle had prophesied that he would die if a house collapsed. Then an eagle flew past with a turtle in its beak, which it wanted to smash on a rock in order to get to its interior. The bird mistook Aeschylus' bald head for a stone from above, let go, and the prey killed the poet.

Even in antiquity it was found remarkable that his grave epigram mentions participation in the Persian Wars , but not his successful poetic work. It is said:

Aeschylus holds this tomb, son of Euphorion, the Athenian.
In the fruitful city of Gela, death conquered him.
But Marathon’s grove, the famous,
Where the Persian, the thickly curly, has tried it, testifies to its strength .

In Athens, on the news of his death, the decision was made to allow his dramas to continue to participate (out of competition) in the competitions.

The most important sources for the life of Aeschylus are a biography handed down in several text manuscripts, the article in the Byzantine lexicon Suda and entries 48, 50 and 59 in the Parian Chronicle , the so-called marble Parium . 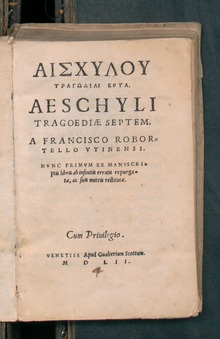 According to tradition, 90 dramas go back to Aeschylus, of which only 79 are known by name. The 20 particularly famous satyr games have all been lost, only the satyr game Diktyulkoi ("Die Netzzieher") has been passed down in substantial parts through two papyri. Only seven of the tragedies are completely preserved. From his early works to the Orestie trilogy, which was completed shortly before his death, a clear artistic development can be identified - from a rather simple narrative style to a drama of world literature that is hardly surpassed in its tragedy and depth of thought.

In 406 BC BC made Aristophanes in his comedy The Frogs Aeschylus in competition with Euripides to the representative of the time-honored times and model of the tragic poet. Around the middle of the 4th century BC His statue was placed next to those of Sophocles and Euripides in the Dionysus Theater.

His reduction in the role of the choir and the introduction of the second actor revolutionized the Greek theater through the dialogue it made possible . But he also influenced posterity significantly through language, style and the choice of myth as the theme of Greek tragedy. His characters are not ordinary people from the people, but protrude from them through their superhuman passion and strength of character, but also the powerful, rugged, sublime and richly pictorial language. Furthermore, effective stage effects, a Polis patriotism and the independent serious preoccupation with the traditional myths of the gods are characteristic of the work of Aeschylus.

The philological preoccupation with the poet's works continued around 330 BC. With the creation of a state copy at the instigation of the Lykurg . Another important step was the list of the works of Greek literature in the library of Alexandria , prepared mainly by Callimachus , and the commentary activities of the learned librarians there.

In the Middle Ages, the Heptas apparently went unnoticed until the 9th century. However, around 850 it was copied using the newly emerged lowercase script. The surviving texts of the tragedies all go back to the manuscripts made at the time. The most important of them and the only one that contains all seven - albeit not entirely without gaps - is Codex Laurentianus 32.9 from the second half of the 10th century.

A new selection was made in the 9th or 10th century, including only the three pieces, The Fettered Prometheus , The Seven Before Thebes, and The Persians , perhaps because they were the easiest to read. They are known as the Byzantine Triassic . The triad was later expanded to include the two Oresty tragedies Agamemnon and The Consumers , and this selection, the pentas (selection of five), also established a branch of tradition.

The Editio princeps , the first printed edition of the works of Aeschylus, was published in Venice in 1518.

Aeschylus' tragedies were taken up late on the opera stage . Particular mention should be made of two Orestie trilogies by Sergei Taneyev (1884–1894, world premiere in 1895) and Darius Milhaud (1913–1922, total world premiere only in 1963) and a Prometheus by Rudolf Wagner-Régeny (world premiere in 1959). The Prometheus by Carl Orff (premiered in 1968) stands out in that the Greek text by Aeschylus is used as the libretto.

Finally, The Persians were also used for contemporary music theater in the 20th and 21st centuries. Adapted in the 20th century, 1985 by Frederic Rzewski and 2003 by Klaus Lang .

The speech artwork The wards of Jelinek linked in part to the The Suppliants to (Hikétides) of Aischylos.