The title of this article is ambiguous. Further meanings are listed under Eleusis (disambiguation) .
f9 f8 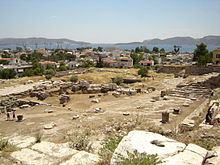 View over the archaeological site of Eleusis

Eleusis ( ancient Greek Ἐλευσίς , modern Greek Ελευσίνα Elefsína ( f. Sg. )) Is a place about 30 km northwest of Athens . It gained its importance through the Mysteries of Eleusis , one of the important cults of ancient Greece . Today the city is a suburb of Athens under the name Elefsina.

Elefsina will be European Capital of Culture in 2021 together with Timișoara (Romania) and Novi Sad (Serbia) .

Eleusis is located on the north bank of the Saronic Gulf northwest of the Greek capital Athens in the Attica region . The European route 94 from Athens to Corinth runs through the town. To the north lie the Mandra and Magoula , in the northeast the Thrias Plain with Aspropyrgos .

On the western outskirts of the city is the largest oil refinery in Greece, in the east of Athens the closest military airfield of the Greek Air Force .

The port of Eleusis is used as a ship cemetery ; many owners of the 30 or so ships, some of which have been lying here for decades, can no longer be identified.

The archaeological site of Eleusis is located on a 63 m high rock with a modern clock tower on top. The first systematic excavations took place in the late 19th and early 20th centuries under the direction of D. Philios, A. Skias and Konstantinos Kourouniotis . In the 1930s and 1950s they were continued by George E. Mylonas and Ioannis Travlos . Most of the ruins date from Roman times. Numerous buildings were erected, especially under the emperors Hadrian and Marc Aurel . The head of a kore, excavated in 1882, is in the National Archaeological Museum of Athens.

The Propylaea , which was modeled on those of the Athenian Acropolis, is entered via a forecourt . A grotto in the rock, the Ploutonion , was considered the gateway to Hades . The most important building of the place of worship was the Telesterion , a large temple that originally dates back to around 600 BC. BC and has been expanded several times. His holiest of holies was the anaktoron , in which the sacred cult objects were kept. There is an archaeological museum on the edge of the excavation site.

The municipality of Elefsina is divided into two municipal and urban districts (population figures from 2011):