Piraeus ( modern Greek Πειραιάς Pireas [ pirɛˈas ] ( m. Sg. ); Ancient Greek Πειραιεύς Peiraieús ) is a municipality in Attica , an important industrial center in Greece and the third largest port on the Mediterranean . The actual municipality had 163,910 inhabitants in 2011, together with the other municipalities in the regional district of Piraeus this resulted in a number of 449,070, the entire Athens-Piraeus agglomeration has approx. 3.8 million inhabitants according to Eurostat, other estimates are due to the lack of reporting requirements of at least five million inhabitants. Piraeus is the historical port of the Greek capital Athens and the southern end point of the important traffic connections that cross the country from Thessaloniki and Patras . Piraeus has around 17.6 million passengers (16.5 million in ferry traffic and 1.1 million with cruise ships ) annually (as of 2019) the largest passenger port in Europe. With a throughput of 5.65 million  TEU (as of 2019), the port of Piraeus is the fourth largest container traffic in Europe and the one with the largest container throughput in the Mediterranean.

Already ancient authors derived the name Piraeus ( Πειραιεύς ) from the word peraieús περαιεύς , ferryman 'from to ancient Greek πειραιόω peiraióō , pallets', this to Greek Pera πέρα , opposite, beyond' (see. Pera , Peraia ). It probably referred to the ferry services between Piraeus and Phaleron . The port of Corinth was also named Peiraiós Πειραιός , another word for 'ferryman'. In German, the name with the meaning as port of Athens also has an article: the Piraeus. 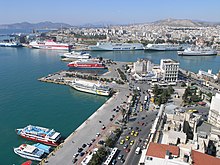 Remains of the old wall on the bank

Piraeus (Peiraieus) is actually the name of the mountainous peninsula, eight kilometers southwest of Athens, with the up to 86½ meter high hill Mounychia (today Kastella ), which was built in the 6th century BC. A castle, and three deeply carved round harbor basins (Piraeus, Zea and Mounychia), which Themistocles had since 493 BC. It was determined to be the port of Athens and was initially surrounded by walls. 461-456 BC The Long Walls were built between Piraeus and Athens.

In the Periclean period, Hippodamos from Miletus laid out the city with streets intersecting at right angles, the ports were expanded, and porticoed halls and ship houses were added. Destroyed after the end of the Peloponnesian War , Piraeus soon flourished anew as a trading port. 394 BC The walls destroyed by the Spartans were also rebuilt.

In the years 347–323 BC The arsenal of Philon was built, the Sulla in 86 BC. Burned down with the other port facilities.

After the port was relocated, ancient Piraeus, the port city of Athens, was divided into the sub-ports of Kantharos, Zea and Mounychia. Kantharos represented the commercial port of Piraeus, while Zea and Mounychia were reserved for the military. Zea was the larger of the two naval ports.

In the Middle Ages, the port was known under the Italian name Porto Leone , after the ancient lion sculpture standing in front of the arsenal in Venice today (a copy is now in Piraeus again). The corresponding Turkish name was Aslan Limani . The smaller ports of Zea and Mounychia are now known as Passalimani (port of the Pasha) or Tourkolimano ( Turkish port) or Mikrolimano (small port). 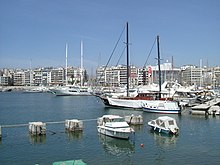 In the course of the Greek sovereign debt crisis , 51% of the container terminal was leased to the Chinese state-owned company China Ocean Shipping (Group) Company (COSCO for short) for a period of 35 years.

The container terminal was connected to the rail network in March 2013 with the Greek railway OSE .

In addition to the main port, there are two smaller ports for private boats and yachts on the southeast side of the peninsula.

Piraeus is accessible by public transport via metro line 1 , the Proastiakos suburban train , an S-Bahn , and the Athens tram . In addition, line 3 of the Athens metro (blue line), which is currently being expanded, will also reach Piraeus.

Piraeus is the starting point of the most important Greek railway in long-distance transport , the railway line Piraeus and Thessaloniki . This also connects Piraeus with the main train station and Athens airport .

The Piraeus trolleybus has been operating in the city since 1949 . In 1988 this system was linked to that of neighboring Athens. This intermunicipal operation is the largest trolleybus network in the EU with 366 vehicles on 22 routes .

The Olympiacos Club , whose soccer department is the most successful club in Greece, has its headquarters in Piraeus . The soccer team plays in the Karaiskakis stadium , the basketball team and volleyball team in the “Irinis kai Philias” opposite . Both can be reached by metro and tram (Faliro station).
In 1969 the European Athletics Championships were held in the Karaiskakis Stadium , and in 1985 the European Athletics Indoor Championships were held in "Irinis kai Philias" .

The German-Greek singer Vicky Leandros was Vice Mayor and City Councilor for Culture and International Relations in Piraeus from October 2006 to May 28, 2008. The former Greek Prime Minister Kostas Simitis represented the city from 1985 to 2009 as a member of parliament.

Sister cities of Piraeus are: