Attica ( Greek Αττική Attiki ) is the most populous region (periferia) of Greece , which until 2010 also formed a Greek prefecture (nomos) . It contains the classical landscape of the same name , but it also includes other areas that never belonged to Attica in antiquity.

In ancient times , Attica was part of the Athens Polis , with a sanctuary of Athena on the Acropolis and a temple of Poseidon at Cape Sunion in the southeast of the landscape. Even today, Athens is the capital and administrative center of the region.

Attica borders the Peloponnese region to the west and central Greece to the north . The southernmost island in the region, Andikythira , is located around 30 km northwest of Crete . Important places are the port of Piraeus near Athens and the town of Marathon in the northeast. On the east coast was the city of Thorikos , where, according to Greek mythology, the goddess Demeter went ashore.

The grave find from Attica is one of the archaeological finds .

In 1833 the newly founded Kingdom of Greece was initially divided into 10 prefectures (nomi) . At that time, Attica formed a prefecture together with Boeotia . From 1899 to 1909 and then permanently from 1943, the two areas were divided into two prefectures. In 1964 Piraeus was spun off as an independent prefecture, but came back to the prefecture of Attica in 1972 (together with the acquired areas of Trizinias and the Argolic islands of Poros, Hydra and Spetses as well as the Ionian islands of Kythira and Andikythira). At the same time, the prefecture was divided into the four districts of Athens , Piraeus, West and Eaststattica , which gradually received the same powers as the other Greek prefectures. In 1986 Attica received the status of an administrative region (gr. Diikitiki periferia ). With the community reform in 1997, the number of Attic communities was reduced to 124 through merger. With the administrative reform of 2010 , the prefectures and prefectural districts were abolished and their competencies were transferred to the now self-governing region (periferia) and the municipalities, which had again been reduced to 66. Since then, Attica has been divided into eight regional districts (Ez. Gr. Periferiaki enotita ), which, apart from the allocation of seats, have no political significance for the regional council.

The Attica region is divided into eight regional districts. In proportion to their number of inhabitants, they send a certain number of MPs to the 101-member regional council.

In 2006, the regional gross domestic product per inhabitant, expressed in purchasing power standards , was 129.1% of the EU-27 average .

In Greece, no distinction is made in the numbering between country roads (including national roads) and four-lane expressways (Ethniki Odos) without structurally separated lanes on the one hand and highways (Avtokinitodromos) on the other. 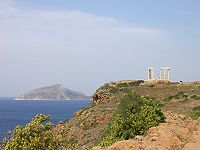