Thorikos was a Greek site on the east coast of Attica , it has been excavated by Belgian archaeologists since the 1970s and has been partially restored. Thorikos belonged to the ancient mining area of Laurion . The excavations are two kilometers north of Lavrio , near a large power station. Strangely enough, the ancient settlement, which was not protected by a wall, but only by a fort, rose on the slopes of the Velatouri mountain. 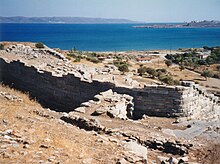 The theater with a rectangular floor plan.

The port of Thorikos was used to deliver the enormous amounts of wood that were needed for smelting the raw material and to ship the refined ores. At the port is also the fort, on the headland, east of the mountain. On the summit of the Velatouri, above the city, there were large and well-preserved Mycenaean domed tombs , which suggest that here as early as the 2nd millennium BC. A Mycenaean prince seat was located; Even then, lead and silver were mined in this region.

Two quarters of the archaic and classical settlement at the foot of the mountain have since been uncovered. Living and industrial work were combined here in a very small space. Immediately next to the houses and workshops, in the settlement, were graves from the 6th – 4th centuries. Century. Here the hectic operation of the mines was brought together with the sacred places without hesitation, an unheard of occurrence for ancient times .

The basic shape of the theater, which was also built right next to a tunnel, is partly carved out of the rock and partly built from blocks. The basic shape is not - as in most of the later antique theaters - semicircular, but elongated. The oldest structures date back to the 6th century BC. BC back. The building, still visible today, dates from the 4th century BC. A gallery, the excavated and restored entrance of which can be viewed through a grille, leads directly to the left of the theater into the mountain. Here, however, not buddies, but tenants and owners of the muse gave themselves up. There is hardly any other place where wealth, art and inhuman exploitation as well as bitter misery have been found in such a small space.