Cape Sounion with the ruins of the Temple of Poseidon

The promontory is 69 km from Athens . On the summit of the headland, which slopes steeply into the sea on three sides, 60 m above sea level, the famous marble temple of the god Poseidon from the 5th century BC is located on an artificial terrace . Created.

From there you have an impressive panoramic view of the surrounding islands of the Aegean Sea. Nearby are the islets of Makronisi in the east and Patroklou or Patroclus in the west, while the islands of Kea , Kythnos and Serifos are a little further away . On a clear day you can see the island of Milos 97 km away. To the east, behind Kea, the 994 m (3261 ft) high peak of the island of Andros protrudes. In the west the view goes over the Saronic Gulf to the mountainous shores of the Argolis . Cape Sounion is now a tourist attraction, especially the sunsets are impressive. As a popular day trip destination, it is reached from Athens on national road 91, which runs along the west coast of Attica (the “Attic Riviera”) and passes several upscale residential areas such as Glyfada , Vouliagmeni and Varkiza . The site and its surroundings were declared one of 10 Greek national parks, which put a stop to further development (there is a tavern and a hotel nearby).

According to the legend, King Ageus of Athens is said to have plunged into the Aegean Sea , which has since been named after him , when he saw the ship of his son Theseus returning from Crete with black sails . The black sails were a prearranged symbol of the death of Theseus, who, however, was still alive and, in the intoxication of victory over the Minotaur, had forgotten to exchange the black sails for white, so that Ageus put an early end to his life out of grief.

Even Homer called Cape Sounion "holy" in the Odyssey :

“But on the Attic bank at Sounion's holy point
, look , the pilot of the Menelian ship was
suddenly killed by the gentle missiles of Apollo. "

From the earliest times there was a place with sanctuaries of Poseidon and Athena. Finds of Egyptian origin in Sounion indicate the extensive foreign trade. Ancient ship moorings from the 4th century BC are still visible on the rocky coast.

Since the end of the 7th century BC, larger- than- life kouroi stood on the cliffs as votive gifts . The so-called Sounion warrior , who is now in Athens in the National Archaeological Museum, is particularly well-known .

Around 490 BC Chr. Was at this point not yet completed temple tuff from the Persians destroyed. Around 440 BC Chr. One was Doric peripteral built, the remains of which have survived.

In the first half of the 5th century BC, Aiginetic democrats found refuge in Sounion. From here they pirated Aegina . In the Peloponnesian War in 413/412 the place Sounion and the temple were surrounded by a tower-reinforced wall to secure the important sea route from Euboea to Athens. After the victory over Xerxes I in the sea ​​battle of Salamis , the Athenians set up a complete captured trireme as a consecration gift for Poseidon at Cape Sounion.

At the Poseidon Festival of Sounion, which took place every four years, mock fights with triremes were performed.

Approx. 500 m away there was a temple of Athena Sunias built in the classical period , but its stones were built in the 1st century BC. Chr. For the construction of the Agora were demolished in Athens.

The walled place was inhabited until Roman times and was an often visited port with a slave market.

The first scientific excavations on the Cape were carried out in March 1884 by the German Archaeological Institute under the direction of Wilhelm Dörpfeld .

Propylon , stoa and a banquet hall also belonged to this holy district . The propylon was built a little later than the classical temple. 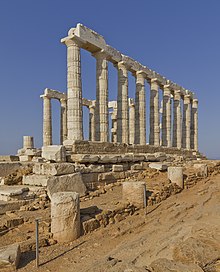 The ruins of the Temple of Poseidon

The Temple of Poseidon in Sounion was a place where sailors could seek the favor of the sea god for a trip - in Homer's words, for example:

“Hear me, Poseidaon, you girdle! Do not reject
Our pious prayer; Fulfill what we desire! "

Above all, however, seafarers or entire city-states brought animal sacrifices or consecration offerings to favor Poseidon or to thank him for a happy crossing, as Homer also describes several times - for other sites:

"... Here we burned Poseidaon
Many loins of the bulls in thanks for the happy sea voyage."

He was around 440 BC. Erected as a Doric peripterus during the reign of Pericles , when the Parthenon was built in Athens.

Ground plan of a peripteros

The floor plan with all-round ring of columns , of which six columns at the front and back, is typical of the period it was built. It is believed that by architect Callicrates was designed also to its plans Temple of Hephaestus in Athens, the Nemesis temple at Rhamnous and the Ares temple in Acharnes was built.

The temple building is exactly on the ground plan of its predecessor, which is a specialty considering the time difference of several decades, as the new building corresponds to the "more modern", classic norms of a Doric peripteros with 6 × 13 columns.

The foundation of the building is a three-tier stylobate , which extends over an area of ​​31 m × 13.5 m and compensates for the irregularity of the terrain.

Of the original 38 Doric columns, 11 were still upright in the 19th century, and 5 more have now been put up again. They give a slim, relatively elegant impression, so that they appear almost ionic. This is due to the fact that their base diameter is only 1 m. With a height of 6.10 m, this means that the columns are more than six times as high as they are wide, while the standard dimensions for the Doric order were usually four and a half to a maximum of five times. In addition, the echinus , the bulge between the column shaft and the abacus , is comparatively slim, i.e. H. designed not swollen. The only thing that makes the pillars appear a little wider is the reduction in the number of fluting from the usual 20 to 16. This construction measure has no aesthetic but a protective function against the erosion of the rock by weather, wind and waves. The reduced surface area offers the forces of nature less chance of attack, so that weathering is delayed.

A final specialty of the columns is the material used, marble from nearby Agrileza. It contains almost no iron components, which means that the yellow-brownish oxidation does not occur and the columns retain their flawlessly beautiful white to this day. The well-worn character of the columns is due to the coarser consistency of the marble, which is not as fine as, for example, Pentelic marble .

Only sparse remains of the temple's sculptural decoration, carved from Parian marble, have survived. The frieze on the east side depicts the battle of the Centaurs with the Lapiths , the east gable, of which only a seated female figure has survived, probably the battle between Poseidon and Athena for rule over Attica. In the rectangular windowless naos opposite the entrance was the cult image, a colossal, probably gilded bronze statue of Poseidon reaching up to the ceiling at a height of 6 m. As usual, Poseidon was represented with a trident .

Even in ancient times, visitors could not resist the temptation to carve their names into walls and pillars. Such graffiti are mentioned in the oldest reports. Even Lord Byron has been immortalized in this way on the northern Ante of the temple.