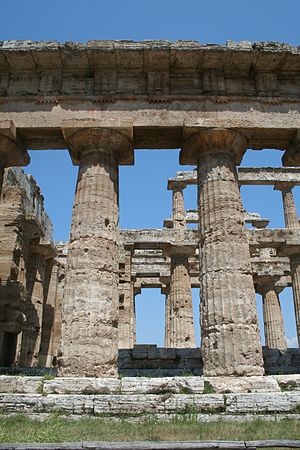 Temple of Poseidon in Paestum

The Doric order is one of the five classical column orders . In the hierarchy of orders it stands between the Tuscan and the Ionic order .

The beginnings of the Doric order can be traced back to the 7th century BC in Greece . Trace back to BC. It was mainly found on the Greek mainland and in Greater Greece , but was also found in the rest of the Doric settlement area, especially Rhodes . The name Doric order goes back to the Dorians , one of the Greek tribes, in whose settlement area - large parts of the Peloponnese , Rhodes, Crete and parts of Asia Minor - the architectural style was mainly developed. At the same time, the formation of the term emphasizes the contrast to the second important building code of the Greeks, the Ionic. During the 6th century BC In BC the formal apparatus of the Doric order was developed to its completion. This was characterized by strict, clearly structured structural elements and shapes. The strictness peculiar to the Doric order, which was expressed by the elimination of originally present 'ionic' elements in the form of wave profiles and the like, was justified in Roman architectural theory with the structural necessities of timber construction. Decorative elements could easily be interpreted as nail heads, end boards and the like. By appealing to the structural specifications of the timber construction tradition, the formal canon was secured, the Doric order was preserved from further development that went beyond mere changes in proportions. However, it is only in the rarest of cases and by no means for all structural members that the reliance on timber construction and the connection with it has been proven.

In the course of its development, the Doric order has only undergone a few changes; the canonical set of rules has only been refined. The stone bases of the rather slender pillars, which were initially documented for wooden pillars and very early stone buildings, disappeared, while the pillars were at the same time extremely compact. The number of fluting on a column, which could initially fluctuate between 16 and 20, was fixed at twenty. However, in the Hellenistic period, fluting could be abandoned entirely or dropped in favor of pure faceting. The swelling of the column shaft, the entasis , originally the dominant optical effect of Doric columns, completely disappeared in the course of development. The conflict of the Doric frieze resulting from the monumentalization of the architecture was balanced by a fixed repertoire of possible solutions. At the beginning there was great freedom in designing the Mutuli of the Doric Geison . Not only that there were solutions with alternating large and small mutuli, such as at the older Poro temple of Aphaia on Aegina or temple C in Selinunte . The number of guttae on the Mutulus plates, which were later regularly arranged in 3 rows of 6 guttae, could vary in the early days of the Doric order with two-row varieties of different gutta numbers. This was also true for the guttae of the Regulae , the number of which did not appear until the second half of the 6th century BC. BC was set to six, but could only be four at the beginning of the century. As is so often the case in Greater Greece, the Doric order in the Geison is once again particularly open to experimentation. In addition to the described canonical Geisa with Mutuli, coffered fields or rich sequences of wave profiles, Kymatien , could adorn the underside of the Geison here right into Hellenism .

Overall, the development pursued a stretching of the proportions. The once squat columns under mighty beams gave way to more and more slender, rising designs. The flattened, bulging capitals stretched. The ratio of the height of the column to the diameter of the column shifted just as drastically as the height of the column to the entablature. Everything became easier, the distance between the columns became lighter. As a result, from the late 4th century BC BC also the triglyph frieze , the triglyphs of which always sat above a column axis and a space between columns, the intercolumn , are given a new rhythm by placing two triglyphs above an intercolumn. As a consequence, contrary to all previous custom, there was now a metope in the middle of the intercolumnium. However, such phenomena were limited to small and hall architecture , to Propyla and the like, in temple construction the old triglyphone remained binding. With the slimming down of the proportions, the popularity of the Doric order, which was increasingly found in Asia Minor and in Ptolemaic Egypt , grew . At the same time, Ionic elements increasingly penetrated the design of “Doric” architectures. In Cyrenaica, Doric columns could be provided with ionic bases. The insertion of the tooth incision into the Doric entablature is more common, for example at the gymnasium in Kos . The enrichment of the Doric order also included the triglyphs, which were worked as protruding reliefs with tripods, sacrificial bowls or the like instead of the slits, for example on the Small Propylaea of Eleusis or on a workpiece on Samos , there additionally crowned by a dominant Ionic egg stick . 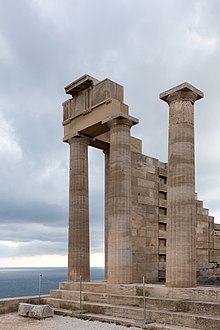 Athena Temple of the Acropolis of Lindos

The foundation and plinth of a building in the Doric order consist of the stereobat (foundation) and the Krepis (step substructure). The foundation is mainly in the ground and is only visible on the smoothed and semi-exposed top layer, the euthyntery . The foundation follows the Krepis with its three steps. The top step is called stylobate and serves as a base for the rising pillars.

The shaft of the Doric column stands directly on the stylobate. In contrast to the pillars of all other orders, it does not have a base .

The column tapers towards the top in a more or less expansive swelling, which is called entasis , but which never extends beyond the lower diameter of the column. The pillars are usually provided with 20 vertically running flat, round recesses, the fluting , which meet with a sharp ridge. In the early days, columns with 16 to 18 fluting were also quite common. At the upper end of the column shaft, up to three horizontal notches mark the transition to the column neck, the hypotrachelion .

The neck of the column is usually attached to the capital . It consists of the lower part, the Echinus , which in earlier times was bulging, from the 4th century BC onwards. Chr. Is increasingly shaped as a truncated cone, and the square cover plate, the abacus . At the transition from the neck of the column to the capital there are also three rings, the anuli , which visibly separate the capital from the column shaft. In the early days, at the beginning of the 6th century BC BC, the capital approaches also had rings made of bronze or stone decorated with leaves to soften the abrupt transition from column shaft to Echinus.

The entablature is essentially divided into two parts: an architrave , also known as an epistyle, made of smooth stone beams and a frieze that is decorated with triglyphs and metopes . Geison and Sima follow above and initiate the transition to the roof.

The heavy architraves weigh down on the capitals , stretching over the yoke , the distance between the column axes, and supporting the structural members above. The upper end of the architrave is formed by a narrow strip, the taenia , on the underside of which there are regular short strips that follow the regulae , related to the following frieze . Six cubic or cylindrical pens, guttae , often interpreted as nail heads, adorn the underside of a regula. The architrave is followed by the Doric frieze, which is also called the triglyph frieze or triglyphone. It consists of a regular sequence of triglyphs and metopes . While the triglyphs always consist of a flat plate with two complete and two half vertical indentations on the sides, the metopes inserted between the triglyphs could either have been smooth and painted or serve as a support for relief decoration. The arrangement of the triglyph frieze usually relates to the distance between the columns, so that a triglyph was arranged above each column and above each intercolumn , the clear distance between two columns. The rhythm given by this is also transferred to other elements of the building such as the aforementioned Regulae and the decorative panels of the Geison.

The triglyphic frieze is followed by the roof, which with its horizontally running geison protrudes far beyond the structural members below. On the underside of the geison hang the mutuli, flat plates, each with three by six guttae. Here, too, the structure of the Doric order dominates: each triglyph and each metope is assigned a mutulus. Compared to the rules, the sequence of the repeating elements has thus doubled. Two mutuli are separated from each other by a recess, the so-called via . The gable triangle of the front sides is framed by the horizontal geison and the rising inclined geisa, which frame the recessed gable field, the tympanum , which is decorated with figurative ornaments in elaborate buildings . The sima , the eaves strip of the Greek roof, is arched outwards and sits on the geison of the long sides as well as on the sloping geisa of the gable sides. It can be decorated with tendril friezes , anthems or geometric ornaments . The Sima is interrupted by openings on the long sides so that the rainwater can run off the roof. Initially these openings were just simple pipes, but later they were often divided by lions' heads as gargoyles . Ideally, the gargoyles took up the vertical structure running through the entire building from bottom to top for the last time. The final ridge, but especially the gable corners, were mostly decorated with figurative, vegetable or ornamental decorations, the acroters .

With the advent of stone temple architecture, however, the width of the architrave and thus the supporting columns increased. Assuming that the triglyphs were placed above the column axis, this would have meant that the corner triglyph would have slipped a little away from the edge towards the center of the temple (Fig. V) . However, the ancient Greeks disliked the idea of ​​not decorating the frieze border with a triglyph. Moving the columns outwards and thus protruding them from the architraves (Fig. I) was also ruled out for structural reasons. This showed that the distance between the corner triglyph and the following triglyph was greater than the other triglyph distances of the frieze.

The Greek architects solved this problem of an inharmonious order of the triglyph frieze in different ways. The simplest solution was to leave the resulting distance between the first two triglyphs and thus add wider metopes to the edges of the triglyph frieze (Fig. II) . Another approach was to widen the corner triglyphs so that all metopes of the frieze had the same dimensions (Fig. III) . The most common approach, which complied with the desire for a harmonic rhythm of triglyphs and metopes in the frieze, was based on shortening the distance between the two outer columns (Fig. IV) . This solution to the Doric corner conflict is called corner contraction . In order to make it appear too dominant, the corner contraction was partly distributed over two pillar yokes (“double corner contraction”) , which however resulted in wider metopes at the edges.

The different approaches to a solution were favored differently in the original distribution area of ​​the Doric order. In motherland Greece , for example, corner contraction was preferred; in Greater Greece , numerous different solutions were used: widening of the corner metopes or corner triglyphs, changes to the distance between columns and metopes. In some cases, different solutions were used simultaneously on the front and long sides.